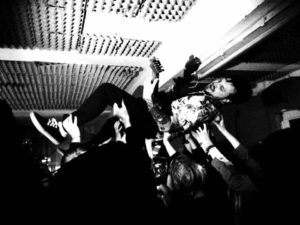 Louder than War’s Ioan Humphreys has a listen to A WEREWOLF’s new album and is completely in love with their unhinged time signatures and spazzcore tendencies.

A WEREWOLF! is a two piece guitar and drum combo from Brierley Hill in the West Midlands whom I have had the privilege of reviewing before here. These noisy misfits have finally got around to finishing their debut album Beautiful Sound, Strange Shape and it is out on 14 August 2017.

Feedback and drums introduce the opening track ‘Yes! You know the stylez, now check the vibe’ and the short sharp vocalisation of the title track is then taken over with a wailing banshee cry and a heavy as fuck dirge of the middle section. More stop start stop jarring come which takes one to the frenetic bitter end! One track down and you already worry for the state of mind of these two…

‘New Boot Goofin’ follows and this had a surprisingly funky staccato riff which quickly into chaotic noise and jazzy drum signatures. The dizzying guitar gymnastics carry on through till the brick wall end. It’s genuinely hard to keep up with the pace and tones of what these two are trying to accomplish. Unearthly screams come in and you are reminded that this two’s influences stretch back through the metal catalogue and they are dredging all the good bits. ‘Wermhat’s Wormhat’ has an audio sample lead in and is quickly followed with searing guitar and drums. The Avant garde jazz influences really start to show through the LP with the weird time signatures and complete disregard for the rock legacy that has come before! This really shows in the tongue in cheek and self-referential ‘Can you tell we like The Locust’ track with which I think they do themselves a disservice, to be honest! The music they make has its influences in metal, thrash and hardcore, yet I think the mutation of their influences transcends the ability to compare and contrast with few bands around at the moment. And this is taken further with the all out Seth Putnam (Anal Cunt) style grindcore vocals with which Ii wholeheartedly approve!

A really cute Sesame Street Style explanation of Grindcore introduces the frenetic 2.24 of heavy noise that is ‘When you are Ron, you are on your own’, that eventually slows down to a sludge rock, before finishing with a balls to the wall fast finish. This band really cannot be pre-empted as to what on earth they will do next with their music.

‘Give your bones (To Slepp The Idol) has more of the intricate jazz infused guitar noodles with full on metal freak outs. And yet again, i have no idea where this track is going as it is no way predictable. It takes the listener all over the place, yet in a majestically mental planned way. No one knows what is going to happen apart from the band and that is the key to this band! They are unhinged and defy anyone to pigeonhole them.

Final track takes the audio starting point from a gloriously bad god-bothering video that has been circling the internet for a few years now and has to be seen to be believed. The intro is deliciously placed next to A WEREWOLF’S grand finale’ of an all out mathcore guitar noodling and insanely fast drumming fest that absolutely throws the listener around like a rag doll and is as majestic as it is uncomfortable. Replete with some scattered trumpet and finished off with the end of the original audio track and it’s hilariously bad rendition of ‘Its amore’, A WEREWOLF’s music use oblique references and have their roots firmly in metal, grindcore and spazzcore. They are unpredictable and indescribable, and this is exactly how I think music should be and why I love this band so much.

A WEREWOLF! can be found on their Facebook and their Bandcamp