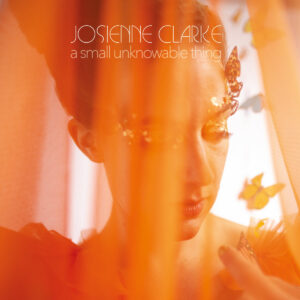 Josienne Clarke is making her presence felt. A Small Unknowable Thing is her second solo album, but the first released on her own label, Corduroy Punk. As much as her first album (and the last on Rough Trade), In All Weather, identified her as an exciting solo artist and songwriter, this release has an additional unfettered zest, an unapologetic freedom.

When you feel like a small, unknowable thing, that feeling is a wearying Bridge Over Troubled Water kind of smallness. To feel like your true self is invisible, inaccessible to yourself or others, is an unbearably hard way to live your life. There’s usually a chain of events, small unknowable things, that gradually move us to such an existential impasse, We can get out of it, but that recovery tends to happen slowly and gradually. In seeking to lift yourself from the mire, you can control the controllables, but within that process, there’s also a hope that the small, unknowable things that you can’t control align in your favour too.

The fourteen tracks are packed with powerful and lucid emotions, the sort of huge feelings that can be almost impossible to comprehend initially, as they maraud through your consciousness. You can sense the intensive thought processes, the mental life laundry that Josienne Clarke has been through over recent years to reach this point, even if you’ve not read about them in her own blog posts. With that clarity, Clarke can embrace and welcome what she wants in life and expose and expel what she doesn’t want.

The final run of three songs iterates this message strongly, with Unbound not only telling us the essence of what we need to know in its title, but reinforcing that with “Time is a great healer.” Repaid is full of “I cannot…” and “I will not…” affirmations, the lyrics cleverly pairing up states of being that she rejects (confined/contained, refined/restrained, maligned/defined). Out Loud feels like the ultimate song of redemption. It’s such a beautiful declaration of unconditional love and a celebration of how joyful declaring that love feels. “I’ve never been one for running my tongue,” she sings in the context of letting the language of love flow, but leads gradually into the victorious “I can do it now.”

What Josienne Clarke can also do is take risks. In her recent interview with LTW, she jested about breaking from the constraints of genre, calling it “emerging from the folk cellar.” That sense of rising and of release into daylight fits in symbolically with the luminescent quality of the album artwork. Anyone trying to shoehorn the old ‘Sandy Denny’ analogy into a review this time round is likely to be looking for someone who has left the building. Armed (or more literally, ‘footed’) with her Sunn O))) Life pedal, bringing overdriven guitars (like at the start of The Collector) there are plenty of indie stylings across the album, to go with its independence of spirit.

In detaching herself from restrictive people, places and life contexts, there’s also strong anger that accompanies liberation. Sting My Heart and Never Lie are subtly barbed, but Sit Out, the first single, is a bruiser. Infused with the forthright nature of IDLES, she sets up an unkind, unsympathetic, unrepentant addressee and then declares, “All you stand for/ Makes me want to sit out.” When Clarke plays what she describes as an ‘anti-solo’ on Sit Out, deliberately discordant over-blown saxophone, it feels like an exorcism and it sounds like an elephant straining damn hard to reach the final throes of a particularly tricky bowel movement (in the most fitting way possible).

An album that opens with the mission statement, “Searching for a tune that I haven’t sung before,” on Super Recogniser, A Small Unknowable Thing gives us many of the familiar things we know and love about Josienne Clarke, whilst also taking us somewhere new and exciting.