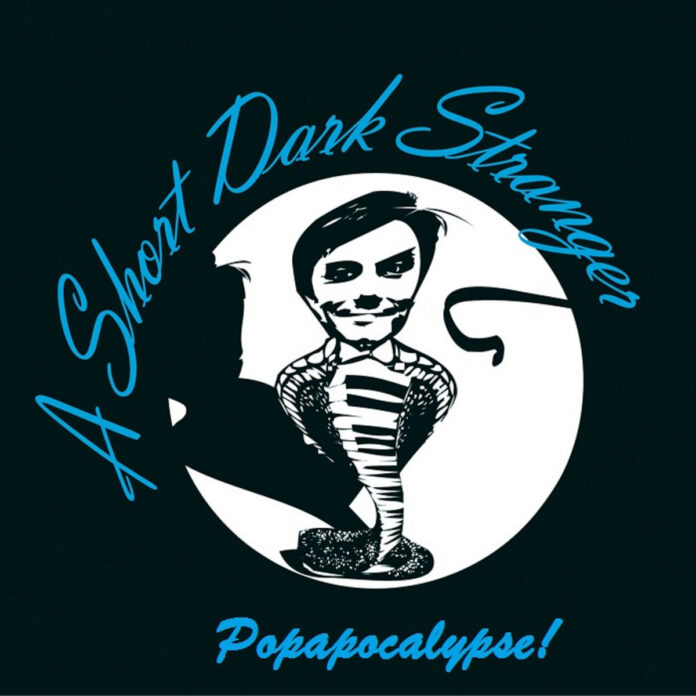 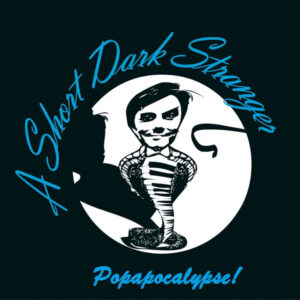 Andy Brown delves into the debut album by Leeds-based power-pop provocateur A Short Dark Stranger and finds a fun, sharp and thoroughly eccentric solo artist out to create his very own Popapocalypse!

To paraphrase The Pogues, Popapocalypse! isn’t the kind of album you hear every day. Fuelled by a steady supply of beer, wine and “Sainsbury’s own brand gin”, the debut album by Leeds-based songwriter A Short Dark Stranger is easily the most eccentric album I’ve heard this year. A real electro-pop oddity brimming with a very unique, almost cabaret-esque charm. Plus, there really aren’t enough album titles punctuated by a big, fat and thoroughly excitable exclamation mark. The album starts as it means to go on with Love’s Young Nightmare; lo-fi techno-pop that inspires visions of drunken late-night karaoke sessions and sticky, neon-lit dancefloors. Our self-professed Short Dark Stranger, sings/ half speaks about hellish night club encounters over the top of an insistently bouncy beat.

The sound of a man trying to start an impromptu party at an open mic with the aid of his keyboard, a belly full of wine and a sheet of incisive lyrics. It’s the kind of joyous, opinion splitting madness that could only have come from the ever-fertile music scene in LS6. The music coming across like an indie-pop Pet Shop Boys while the lyrics have a Jarvis-esque sense of wit and absurdity. “Love is a dream to me” sings our self-styled mysterious stranger “love is a cat flap of opportunity”. Our flawed, lonely and potentially inebriated guide leads us through the pubs, clubs and disappointments with panache and a healthy dose of self-deprecation.

While it took me a few listens to really appreciate the albums unique charm, the likes of Lenina (Ending Is Better Than Mending Mix) will become firmly lodged in your head after one solitary play. Our suited and sorry love fool letting us know, “I wake up every day with this Boxing Day sense of disappointment/ I wish you’d stayed/ I should never, never, never have let you down”. There’s a very specific geography to the album; the references, mood and outlook setting Popapocalypse! firmly in the north of England. Concerns about gentrification appear on the ace synth-pop ballad Manchester Skyline with its tale of “bland boutiques”, “identikit bars” and a confession that, “But for the trams well – this could be Leeds!”

The lyrics are utterly fantastic throughout. The brilliant, pulsing power-pop of The Empathy Strikes Back is accompanied by a typically honest confession, “It may seem hopeless but – well, yes, all right, it sometimes is!”. Our guide isn’t about to cave under the pressure though. Murdoch’s gutter press and the abhorrent attitudes they represent receive a firm middle finger on the social commentary disco of The World Will Give You Cancer (Tabloid Trash Mix). “Asylum seekers? The New Grim Reapers! Proclaim these glorified TV guides” he sings before sarcastically echoing the hateful headlines, “They’ll take your job – then dig up Princess Diana… And jeopardise your way of life!”

Yet it’s the plea to “lose your inhibitions” on The Human Condition (The Pet Shop Bites Back Mix) that really sums up the albums attitude. Sure, life is full of crushing disappointments but can’t we go out dancing anyway? Of course, the answer to that isn’t quite as straightforward during a lockdown but the sentiment still stands. Optimism in the face of insurmountable odds is the name of the game, perfectly captured by the albums superb closing track Peter Levy; an unexpected ode to the BBC Radio Humberside and Look North presenter. “But I won’t give up on life ‘til my last breath leaves me” sings our unlikely champion as he grasps the TV remote “I’m going to watch the news with Peter Levy!”

The whole thing feels gloriously out of step; an over-excited album of idiosyncratic oddities, flamboyant catchiness and kitchen sink drama. A Short Dark Stranger clearly couldn’t be anyone but himself and that’s a pretty endearing quality. It won’t work for everyone but if you stick with it, you’ll discover an album of clever, kitsch and hugely enjoyable power pop. Unlike a regular apocalypse, it turns out that a Popapocalypse! is actually a lot of fun.

What’s Hot In Scotland This January