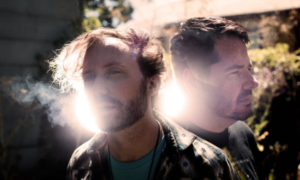 Originating in Barnum, Colorado, A Shoreline Dream is Ryan Policky (vocalist/guitarist/producer) and Erik Jeffries (guitar). This twosome have been working and experimenting together for 10 years now and Whirlwind is a work of art that has been borne from the recent death of singer Ryan Policky’s father and a murder occurring right next door to where A Shoreline Dream writes, practices and records. This saddening and disturbing serious of events were the motivation to finish and release this track as both a euology for the dearly parted and the end of the summer.

The track is a minimalist one chord chug that careers along like a freight train. A freight train that has no breaks. That is also on fire. And is currently heading into a whiteout blizzard. Layers upon layers of noise wash over the listener like a muddy wave. It’s dirty and grimy and has a very JAMC feel to the rhythm that is created by the insistent drums and noisy guitars.

Yet, unlike some JAMC, its has a lightness to its touch that makes the noise bearable and even melodic. Very much like what Ride were capable of. Whirlwind also has a psych feel to it that reminds one of Hawkwind’s epic soundscapes. Finally, the minimalist noise and structure is very much echoed by the economic lyrics and laid back reverb drawl of lead singer Policky.

As a track that was made out of a mixture of sadness, disbelief and fear, it really does have a positive summery feel to it that is very addictive. This deserves several spins and an addition to anyone’s playlist. Short, but very sweet.