Home Blogs a piece onWhat music does Nigel Farrage listen to? or is rock... 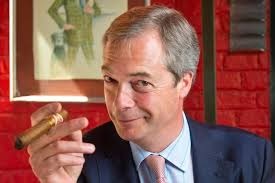 It was shocking to discover the other day that Nigel Farrage is about 4 years younger than me but then there are lots of things about the UKIP leader that are not what you expect.

From his fake man in the pub anti establishment stance from the ex city trader who is just another millionaire pottering around in politics to his love of ‘common sense’ Farrage has somehow mesmerised the public with his fake credentials.

I stared hard at his picture and wondered what kind of music the UKIP leader liked. A quick search on the internet turns nothing up- no jolly quips about some musical love from his youth, no misty eyed recollections of musical japes like everyone else, not even any pretending to like ‘hip’ bands like David Cameron. It seemed that initially that Farrage must be untouched by pop culture and that the ebbs and flows of music culture had left him untouched and like the sozzled colonel in Fawlty Towers he was the representative of some long lost empire clutching his copy of the Times in his manicured grimble claws.

And that’s quite odd.

Most people like some sort of music and it made me think just what kind of music does Nigel like?

A couple of years ago I helped Feargal Sharkey do the music quiz at the party political conferences and it was an interesting experience that somehow melted the parties down to a faintly cliched core- the Lib Dems were fans of stadium indie with Coldplay and those sort of listless multi millionaires of pop a big favourite, the Tories were into wearing faded denim and lite metal like Iron Maiden whilst Labour were more fans of punk and indie. Of course there were anomalies like Ed Vaizey- the Tory culture secretary who was, oddly, a big fan of the Redskins and David Cameron whose, ahem, broad mind somehow managed to shoehorn Eton Rifles, the Smiths and the taxing Gary Barlow into his record collection…but what of Nigel – what kind of music does this, er, man of the people really like?

Following the parties policy I guess it would have to be picture postcard version of Englishness- not as extreme as the BNP’s love of flaxen locked maidens singing folk music but a white version of the UK untainted by stuff from other countries and that scary world outside the borders- I know that doesn’t leave much, if any, music as nearly all pop music is by definition the product of ‘immigrant culture’.

My guess- and it is a guess, would be that Queen would feature highly in the UKIP leader desert island discs with the same sort of David Cameron style of avoiding the awkward facts like dear old Freddie Mercury being, gasp, one of those damn immigrants.

Even Eurovision seemed to be riven with some sort of weird party lines. For a competition that is high camp and not that serious the political parties were projecting their fantasies onto the whole shimmering shindig.

The Culture House/YouGov poll asked ‘Do you think Britain should or should not continue to compete in the Eurovision Song Contest?’ and it showed a clear breakdown on party political lines. The Liberal Democrats are the most enthusiastic for Eurovision, wanting to stay in by 54-27 – so a 27-point lead. With Labour, it’s a 14-point lead and Tories by a four-point margin. But UKIP voters are the real party poopers: they want out, by a 27-point margin.

So what of pop culture? once assumed to be the vanguard of idealism it turns out that it’s anything but… assuming that music is the soundtrack to the left or the right is just that- an assumption and it turns out that pop culture is hardly the rebel soundtrack that most of my generation once assumed it was. Growing up it seemed like pop culture was a myriad of thrilling possibilities- a counter culture tinged wonder world of idealism and hope- but now it seems like this was just part of the bright light sheen of the of machine.

It turns out it was just another costume drama and as pretend as Farrage’s politics with ‘street fighting men’ like Mick Jagger turning out to be big fans of Margaret Thatcher and about about on inch away from being a Tory MP- god knows what Keef Richards stands for- if he can stand at all but when you hear him talk its like the sam sort of drunken lord that would fit perfectly into UKIP’s eventual cabinet when they come to power.

Pop culture is full of the reactionary and the conservative- from Prince citing god in homophobic quips to Roger Daltry to Eric Clapton – and even David Bowie’s infamous Fascist state quip decades ago but that may have been due more to white powder than white power- but when you scratch the rock rock star surface the mansion owning, greed politics comes to the surface and it’s a depressing sight.

When you think about it it all makes sense, perhaps instead of being the beacon flame for the counter culture music was always the most selfish of worlds- a place were getting to the top and crushing the opposition was always the prime motivator and any sense of community was left at the door of the rehearsal room int her at race of musical survival.