Home Music Bands A Page Of Punk: Nottingham, Stuck On A Name Studios –... 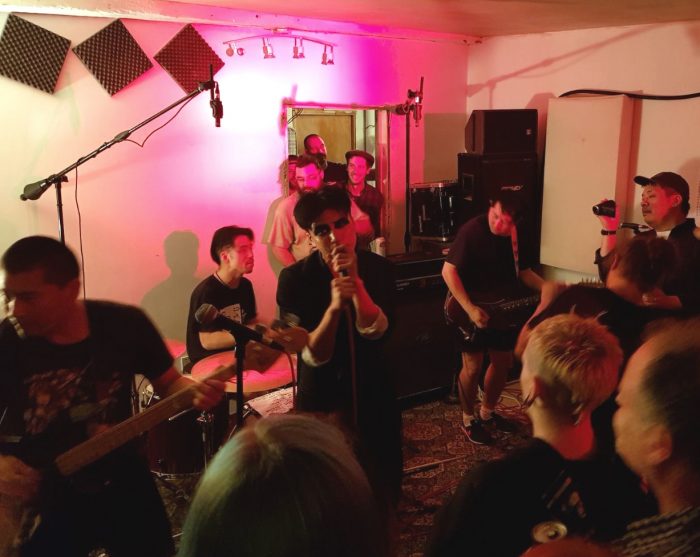 A Page Of Punk

Nottingham, Stuck On A Name Studios

A Page Of Punk: Nottingham, Stuck On A Name Studios – live review by Christopher Lloyd

I’d love to do the standard introduction to a live review here, the one where you stick a bit about the band’s official bio in and lead it into the review itself.

However, A Page Of Punk doesn’t seem to have much information online to draw from, and what is there is in their native tongue.
What I can tell you though, is that A Page Of Punk are a Japanese five piece who seem to play like The Ramones as possessed by Motorhead.

As the band took to the floor in front of around 30 people in a rehearsal room within Nottingham’s ‘Stuck On A Name Studios’, the infamous cry of “12341234” (the band’s catchphrase, possibly as their songs are so fast they make The Ramones tracks seem like prog epics) kicked in and the vocalist seemingly appeared from a kitchen serving hatch, across the heads of the throng and kicked straight into half an hour of 220bpm Japanese Punk fun.

The energy was amazing, but what made it more so was the sheer enjoyment on the bands faces, especially the bassist, easily the most talkative member and chief “12341234” yeller. That man had the biggest grin on his face you could ever hope to see, and his enthusiasm was utterly contagious. There could not of been a single person in this room that wasn’t totally captivated.

The tracks thundered out, one after another, all similar in theme… stupidly fast, brilliantly aggressive yet with a pop tinge. In fact, when it comes to pop, A Page of Punk finished the set with a bizarrely brilliant cover of Oasis’s ‘Don’t Look Back In Anger’, which was greeted with bemused, yet rapturous joy.

What the band will do once this tour is over I do not know. Back to Japan to do their thing one suspects. They clearly totally love what they do, and fingers crossed they’ll come back to our shores once more to tour again.

Words and photography by Christopher Lloyd. You can read more of Christopher’s writing at his author’s archive.