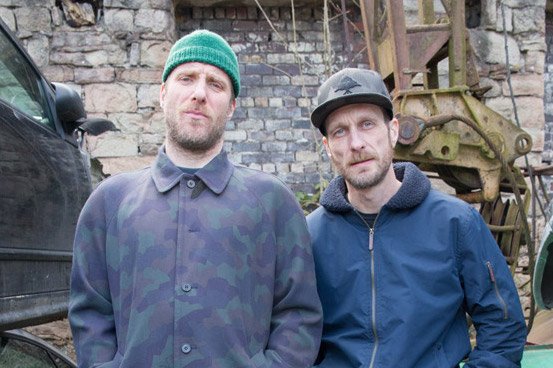 Above: a new track from Sleaford Mods. Below: new words from Jason Williamson, telling it like it is. Again.

“I remember January 2014 at The Chameleon Club, three months before we released ‘Divide and Exit’: “Do you mind if I dance behind you on stage mate? Only there’s no fucking room out there.” I looked over and it was packed to fuck. People were standing on tables, crammed in, bunched up and raving. By this stage, and after a year or so of solid gigging, my rants had developed into kicked volleys, Andrew’s music had married itself fully to the cause, and all this was bound tightly by our manager, Steve Underwood’s experienced logistical swipes. This was word of mouth, no gimmicks. We were finally starting to connect with the UK.

There was this Mod at a gig in Leamington Spa, he looked aboutmy age, mid-forties, mouth wide open, eyes fixed. “Thank fuck!” he said to himself, like he had just found his wallet after frantically looking for it for half hour. I saw this, I read his lips. This kind of experience had been repeating itself over and over throughout the small towns tour of the UK that started in March this year. You had people pressed against the barriers, snarling, connecting totally and instantly. Some pub in the middle of Scunthorpe, packed. Some grot den in the middle of Doncaster or Milton Keynes, packed. This is the kind of response we wanted because the music had been made to fit this. You don’t want the kind of admiration that looks like some trail of flower petals everywhere you go. You don’t want that crap notion of awe struck fandom, mainly because it’s bollocks and if you have got that then you’ve allowed yourself to become fucking stupid. No, in the case of this band, you want people to feel your fucking anger just like you do, to feel the same way about all these lazy fucking posers hanging kryptonite around the neck of music. Yet this lot did, as they barked at us throughout the sets, waving fists, getting twatted on a school night, thanking us with furious handshakes. There was a consistent atmosphere of relief lurking at every gig, and we couldn’t believe it.

When you stumble out of a small club after 25 dates, that have all been rammed to rafters with gleaming punters, for a post gig ciggie, you are enamoured with the experience of spreading the word of your band in this sweat and tears way. None of this six gigs a year business, no. And because of that you won’t take any prisoners either. If you haven’t got it you need to admit this and ‘start dishing fucking refunds out’.

Major labels can’t even get an ounce of that fucking feeling with the robots they sign, those cunts that buy out the charts week on week. It’s within our interests to take some of what we see crumbling, back. Most of the time this is impossible and we are forced to watch as the microwaved idiots dominate all areas with a message of defeat. Their message tells us to give in, to become bland ambassadors on behalf of the board by pretending to be fucking sexy, or Keith Richards, and in return you get 50,000 twitter followers who haven’t got a fucking clue who they are, let alone who you are, but that doesn’t matter. They’ve bought into the image that’s elevated you. You are on the front pages for sucking eggs, earning pence and doing as they say.

And that brings me to the Last Post. It’s a recently refurbished Wetherspoon’s in Beeston, Nottingham. Behind it lies the town church, idyllic, full of souls cheering in the face of obscurity, cheap meals and the taps are on from 8.00am (providing you buy food at that time) – it has it all. Guilt thrives through religious conviction and it harangues all generations that drink in there. The Monday Club turns into the all week club. The life of simplicity is blissful ignorance, so what’s not to like? Well everything if I’m honest but that’s the beauty of it all. It’s shit, but you still feel close to it all. You still feel close to the shit bands, the also rans who refuse to realise they are 20 years behind, 10 years even. They’ll never get away with it, it’s too Shakin’ Stevens – it’s shit.

‘Key Markets’ is the collective work of Sleaford Mods, Harbinger Sound and the people who have come to the gigs in full support or bought the records, because it means something to them. This is the actual deal, hard work, all hands on deck. Steve was in town on the day of the album release on Friday in the pissing rain, making trips to and from home to restock the record in local independent shops that had sold out, because that’s how it works. It’s all fucking hands on deck. This is not a whimsical hark back to yesteryear or a demonstration of the old promotional techniques, this also isn’t a fucking history lesson. This is how it fucking should be. Live tonight, every night.” – Jason Williamson.

‘Key Markets’ is out this week in your local independent record shop or via digital download from geni.us/SleafordModsKeyiTunes. Or order it on delicious green vinyl and on CD from sleafordmods.com.