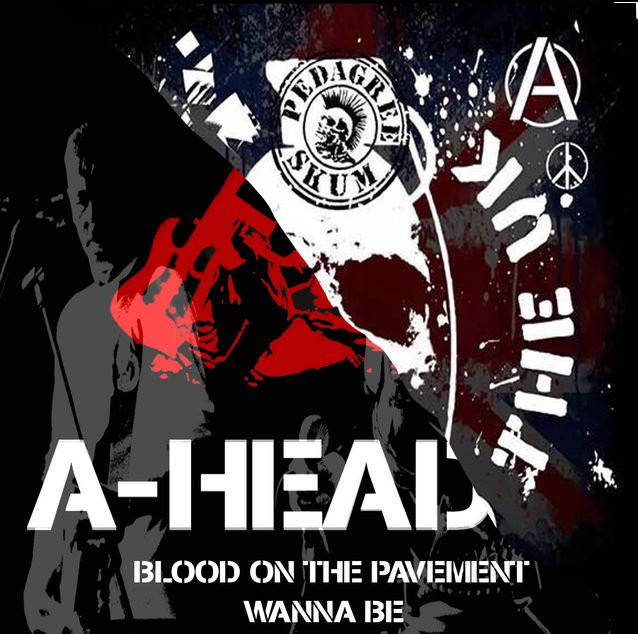 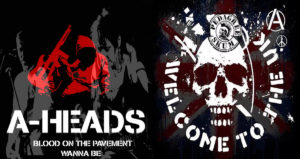 Wessex’s A-Heads are criminally under-rated and every time I see them live they bang out a great set – even on an occasion when they had to borrow a drummer at short notice.

The first of the two songs they offer up – “Blood on the Pavement” – opens with a riff that sounds distinctly like SLF “Nobody’s Heroes” before settling down into the main tune which is pretty melodic throughout. The guitar is almost jangley, not too heavy on the distortion. An almost constant stream of intelligent lyrics focuses on the current epidemic of violent deaths among young people.

“Wanna Be” is a straight up upbeat punk song with a repetitive riff – you know the sort of thing that punks have been using ever since we heard the Ramones or Sham’s Borstal Breakout (and with it’s roots in Chuck Berry and Eddie Cochrane). Again, there is a hint of SLF in the riffage. Something about Mel’s vocal delivery reminds me of Siouxsie Sioux. I think it’s the tone at which she sings and the fact that she knows how to hold a melody.

On the flip side, Pedagree Skum from the Midlands first came to my attention on an excellent 4 way split EP that Grow Your Own released in 2015 and I reviewed for Louder Than War in which I believe I declared them to be the stand out band (against some incredibly stiff competition).

Kicking in with a meaty bass sound, “Sign of the Times” ranges between chunky chug on the verses and fast riffing on the choruses. On these faster sections there is something Rudimentary Peni-esque in the guitar department. Vocals plead and scream as if from the void about the loneliness of our existence.

There is yet more of a Peni sound to “Welcome to the UK” – more so than the previous track with the bass in particular playing higher octaves that Peni made their trademark sound. Those who enjoyed 1990s DIRT will like this. As the title suggests, they are tackling the ever present subject of negative attitudes to immigration, when the problems that people are so animated about are visited upon them by the rich and powerful. A vital message in times like these when even the punk scene is becoming infected with bigotry, racism and outright fascism after years of fighting to destroy such things.

Now, I know it’s been frowned upon recently in a piece on Louder Than War but it is worthy of note that both these bands are “female fronted”. Why?  Cos I think we need to remind the nay-sayers and detractors that punk rock has never been just boys with guitars and girlfriends watching from the side.  Punk has always been an inclusive scene in which people play an active part regardless of gender. Vive le difference.

Get your copy from one of the best labels pumping out DIY punk rock from the UK at the moment (and one of my faves): Grow Your Own.