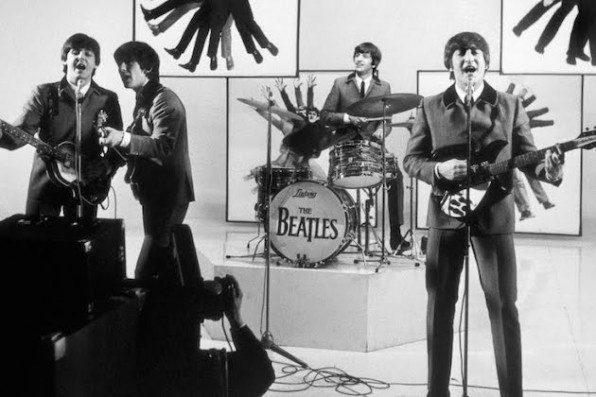 A Hard Day’s Night is fifty years old. Amy Britton looks back at one of the few great pop movies.

It used to just be par for the course for popular musicians, particularly if they had a young market, to make films. Let’s face it, pound for pound, its largely a good thing we’ve moved on from there, as more often than not these films were contrived efforts at marketing which, by forcing their  young stars into acting, were taking them into an area which was ill suited to their talents.

However, there are exceptions. The frantic 90 minute snapshot of Beatlemania that is A Hard Days Night has recently been restored for its 50th anniversary, and has lost none of the natural charm and easygoing humour that it had in 1964.

There are two seemingly conflicting, paradoxical factors that make A Hard Day’s Night an effective film in 2014. One is how much of a snapshot of history it is. Smoking! Lots of it! In a really nonchalant way, including on public transport! (Nowadays, if a teen idol has a sneaky cigarette, it’s a tabloid shock horror story). The vibe of playful rebellion, teenagers versus the grown up world, that has been lost somewhat since parents started getting down with the kids. (The scene in which corporate marketing men trying to understand the youth market try to trick George Harrison into joining their brainwashed masses is one of the high points of the film, reminiscent of Colin McInnes concerns in Absolute Beginners about adults marketing the idea of a teenage culture they can never properly understand). And, of course, Beatlemania itself. Has there ever been a better example of musical successes and fan culture marking out an era so much? Initially, I was tempted to think that this kind of fandom and hysteria doesn’t really exist anymore, but then you look at One Direction’s fans … the hysteria exists, its just that the standard of the music has  dropped somewhat!

These days though, celebrities will (not unjustly, in all fairness) complain consistently about their lack of privacy – but A Hard Day’s Night makes superstardom look like it’s a lot of fun. The viewer leaves somewhat jealous that they aren’t actually in The Beatles, not just for the screaming girls but the sense of warmly funny camaraderie between them, albeit in the context of a written script but so naturally acted that if it isn’t real, then the Beatles were an extremely capable bunch of actors. Lennon, in particular, played up to his fantastically arrogant image with spot on comedic timing.

That’s the second factor that makes A Hard Day’s Night so enduring. It might be a snapshot of time, but it other ways it is timeless. Anyone whose ever shared the company of a group of four, young, male friends will see them reflected in the Beatles onscreen relationship – particularly with the perpetual importance of piss taking in such friendships.

Of course, A Hard Day’s Night is helped along the way by very credible proper actors, such as Wilfred Brambell (whose role as Paul McCartney’s slyly rebellious grandfather is the driving force behind much of the admittedly insignificant plot), and some straightforward but visually effective direction which the new restoration has done a lot of justice too. But don’t watch it for a storyline. Watch it for one of the most fun insights into being young and free in the 1960s you could possibly find, capturing the Beatles at the pivotal moment of their career. After all, you need some sort of warm up before you tackle Yellow Submarine, right?