Home Music Bands A Forest of Stars Interview – we talk to the Yorkshire black... 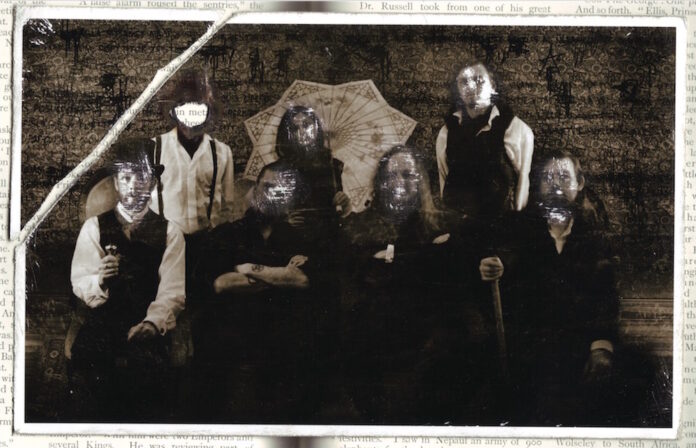 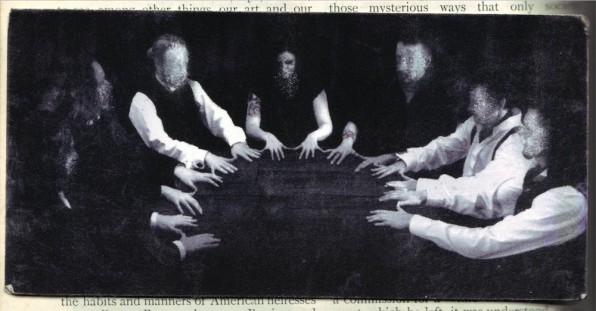 Yorkshire’s A Forest of Stars are a black metal band who incorporate elements of folk and psychedelic rock into their sound. Since their debut album, 2008s ‘The Corpse of Rebirth’, the band have released two further albums, 2010s ‘Opportunist Thieves of Spring’ and the 2012 masterpiece, ‘A Shadowplay for Yesterdays. So the time must be about right for another in 2015, right? Andy Santiago decided to have another chat to the former “New Band of the Day” to find out.

2014 has been a sterling year for UK black metal bands releasing absolutely first-rate albums. The likes of Winterfylleth, Voices and Fen have all delivered recorded works that see them not only hitting new peaks of creativity but producing some of the most interesting, refreshing and just plain excellent black metal you could ever hope to hear.

There is a band missing from the above list, who, since forming in 1890, have also been pushing the sonic blueprint into previously unheard territories with their ‘Steam Powered Black Metal’ and that also has strong elements of Prog, Folk and outright Psychedelia. I’m talking about the utterly magnificent Leeds-based occultists from the Victorian era, A Forest of Stars.

It had been 14 months since my last encounter with this bunch of shadowy ne’er do wells and at that last meeting, the band revealed they were in the process of recording a new album that was expected to see the light of day in the spring of this year. And so, in the slightly less than befitting surroundings of a particularly mundane student common room in the bowels of Leeds University, I sat down to afternoon tea with The Gentleman (keyboards and percussion), Mister Curse (vocals) and recently resurrected guitarist Mr T.S Kettleburner to get up to date with all the latest news from the club.

Louder Than War: So, the new album then?

TG: In terms of the album itself, it’s been recorded and it’s all done and handed over to the label. The artwork is in the process and is nearly done, the video is well on the way to being done and it will be out early next year.

Has the release date been put back? The last time we spoke, you said you were looking at putting it out in spring 2015.

TG: Basically, the label had an eight month backlog of albums coming out at that time. They said we could have it right at the end of this year so we’d rather just leave it a few months and have it right at the start of next year. If you drop an album right before Christmas then it can quickly disappear.

So it’s more of a commercial decision?

TG: Well yeah, but the second reason is the video which is looking fantastic at the moment, the more time we can give over to getting the video done and given those extra few months will take the video from being good to being amazing and we might as well spend that extra time and do that. 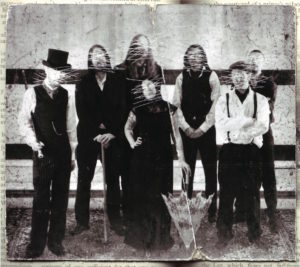 You’ve got a long way to go to top the video for ‘Gatherer of the Pure”..

TG: That’s the thing, we decided to put it back just a little bit for a lot of good reasons. We’ve got a new guitarist in the band and John… (T.S Kettleburner to give him his full title).

TSK: An old guitarist who returned!

TG: So we’ve had line-up things as well so that means we’ve been re-learning and re-rehearsing and all that so it’s just better to push back things a little so instead of us having to rush and get things ready we can just be comfortable as well. We want everything to be the best it possibly can.

TSK: We’ve spent a long time making the album as we wanted it and we’ve really got a chance to step back a little in the middle of the process. We view ourselves very critically and I think this has been a good thing in this case, the same applies to the video, just spending the time and hopefully making it worth the wait.

Do you want to let slip the title of the album?

So you won’t be drawn on the subject?

TG: (still laughing) We could give you a lot of titles that the album isn’t!!! A list of rejected album titles!!

Hilarity ensues and when order is restored, Curse speaks.

MC: It’s absolutely nothing personal, it’s just this year has been a bit of an interesting year for us. There’s been various hurdles to clear…

I’m not looking for gossip here….

MC: We’re also not trying to be cagey but it’s a matter of us not having a lot of options. We need to keep it under wraps until the label has got the name as they need to officially announce it. That’s how it is these days.

TG: Exactly. The label have sort of a map of how and when they want things to be done, they’re very nice to us and so we promised!

MC: Time has been a little against us but we’re all back on track now.

I notice there’s been a flurry of live activity from you recently. Having not played live for over 10 months to 3 gigs in as many weeks, that’s an outrageous workload!!!

TG: Yes, yes it is for us, our heads are spinning! That’s all to do with the returning and new people in the band and just getting up to speed again. Having spent a lot of time in the studio, getting back to being a live band takes time.

TSK: Learning how to play again! What is this instrument before me? It has strings and everything!

Have you or do you plan to debut any of the new material at these shows?

TG: No, we’ve not played anything new as yet, we’re sticking to the first 3 albums.

TSK: It’s the Gentlemen’s club ‘Code of Silence’ staying strong with this one!

So, you’re just ‘wheeling out the hit’s’ at these shows then?

MC: It’s mainly to avoid it going on YouTube or something like that, we don’t really want a crap version to appear before the album is released. It would be a shame after all the time and effort that’s gone into it, but once it’s out there in the world hey, who cares?

Are you willing to divulge anything about the lyrical content of the new album? Is it a concept album like ‘A Shadowplay for Yesterdays’?

MC: It’s pretty death-obsessed, just to rattle out the old clichés! There’s a lot of trying to liken mankind to an infestation. Sort of maggots, worms. Kind of creepy-crawlies. I think I was quite heavily influenced by the whole idea of death happening when it’s not time for death to be happening and feeling the.. how do you put it? Some sort of spiritual death as if you’re actually walking around alive but you’re just on borrowed time, feeling slightly tortured like your end has come but yet no one’s actually told you. Things like that. My health has not been good for several years, there’s a lot of problems physically, not to get the little violins out and all that bullshit but it’s definitely been occupying my mind a lot. I was diagnosed with a liver condition which affects your joints and your memory and your general day to day…

TG: And your memory!

MC: And your memory yeah! So it’s been a bit of an uphill struggle, I’m pleased with the lyrics, I think it’s some of the strongest stuff I’ve written. It’s always a cliché of people saying it’s the best stuff I’ve ever done but as a complete album yeah, I’m happy with it. There is a line in it that resembles something from the new Electric Wizard which is dead frustrating as I’ve had these lyrics written for ages and it’s like I’ve ripped them off! In a way it’s quite a nice thing that you’re thinking along the same lines as somebody but on the other, it’s like “Oh Shit!”, People are going to think I’ve ripped it off. It is quite a conceptual album again, it’s a loose concept though, but once again, it’s a Prog album that goes back and forth between ideas. The overriding thing is worms, maggots, death. Just general confusion you know? Like why didn’t anybody let me know? Why am I a walking corpse? Why am I down here riddled with beasts and no one’s told me?

TSK: I think that sums it up quite nicely. 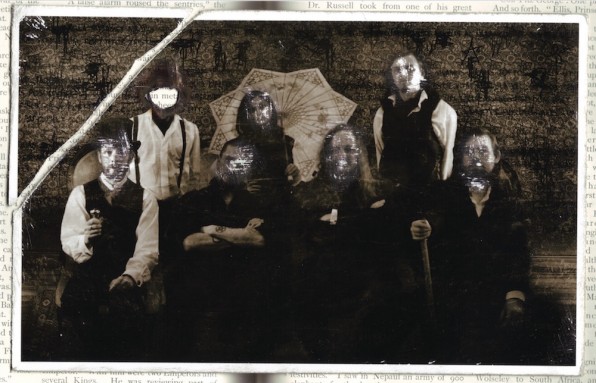 What are your plans to promote the album after release? Are you looking at extensive touring?

TG: Maybe even as many as 8!! The idea is that we’ll be doing a nice jaunt around Europe next year in support of the album and hopefully some festivals and stuff. We’ll see after that but that’s the initial plan.

When you did the Roadburn gig, you had quite a production with on-stage projections and such, any plans to bring that massive production to future shows?

TG: (in between fits of hysterical laughter) There’ll be lions and tigers and Eskimos, sorry, Inuits! And they’ll be breathing fire. Out of canons!

TSK: I’m hoping for midgets being fired out of canons! The Victorian-influenced Rammstein!!

Time is marching on and Curse has the final word.

MC: I’m really sorry we can’t give you more information, things are happening now though. Just because things have been a little bit slowed down, particularly this year, but we are back on track. We hadn’t died or anything, we were just having a bit of a think.

As ever, the chaps from A Forest of Stars were a pleasure to spend time with, entertaining, friendly and the collective owners of a wicked sense of humour. Clearly a Yorkshire thing!

The as yet undisclosed album will be released on Prophecy records at an undisclosed time early next year with a video presentation of an as yet unknown song to follow at a currently unknown time! These lack of concrete dates and titles have absolutely no importance. What is important is that you can be assured that when the time is right, A Forest of Stars are going to drop yet another masterpiece of sonic and visual alchemy that no other band can rival.

Thanks to the band for taking time to talk to me and I personally can’t wait for the album, video and of course, the live shows. With or without the midgets.

A Forest of Stars can be found at the following places: aforestofstars.co.uk, Facebook and Bandcamp.