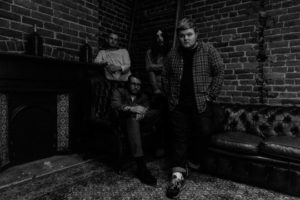 Louder than War have a listen to more interesting noisy alt rock from Newcastle.

It has a brooding quiet start, ethereal guitars, drums and then almost spoken word vocals from front man Joe Allan. The drums become very insistent and guest vocalist Immy Williams provides the perfect contrast. With the keyboards coming in, there is a definite frenetic feel to this; an urgency especially with the stabs of distorted guitar.

It has a very jazzy feel to its song structure – free form and a disregard for the norm. Nice.

The slow feedback drenched interlude at the end is a welcome break from the chaos. It’s noisy, yet euphoric at the same time. A festival, A Parade have done it again. Welcome back!

A Festival, A Parade can be found on their Facebook, Soundcloud and they also tweet as @afestaparade.