Home Blogs A Festival, A Parade: If Dogs Could Talk – Single review 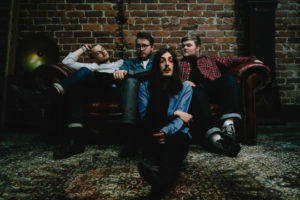 A Festival, A Parade

If Dogs Could Talk

Louder than War take in some lovely quirkiness from Newcastle.

A Festival, A Parade are a four piece alternative rock band from Newcastle. Having already played a number of hectic live shows alongside the likes of Maximo Park, Public Service Broadcasting and VANT, the momentum currently being generated doesn’t seem like slowing down at all with the announcement of the forthcoming release of their brand new single ‘If Dogs Could Talk’.

From the start, you can tell this band has a big sound with layers of distortion that immerses the listener. Its dark and brooding and this is amplified once the deep echoy vocals of Joe Allan kick in. A Festival, A Parade have a very ‘The Horrors’ feel to the sound that manages to tread the thin line of theatrical dirge, but with a very melodic undertone. Really nice and really effective.

Halfway through this ‘Jesus and Mary Chain’ esque wall of sound, things suddenly stop with an almost math rock breakdown that ‘Rolo Tomassi’ would be proud of. However, the noisy melody quickly restarts and the euphoric chorus leads us to the end of this track with its weird time signatures and a general disregard for the human ear.

It’s melodic, yet noisy. Its dark, yet it has its light moments. It’s loud, and then it’s quiet. ‘A Festival, A Parade’ can be as clunky as their moniker, yet their sound is delightfully schizophrenic. It definitely has legs and their weirdness intrigues. More A Festival, A Parade is needed to satiate this writer’s appetite for oddballs.

A Festival, A Parade can be found on their Facebook, Soundcloud and they also tweet as @afestaparade.