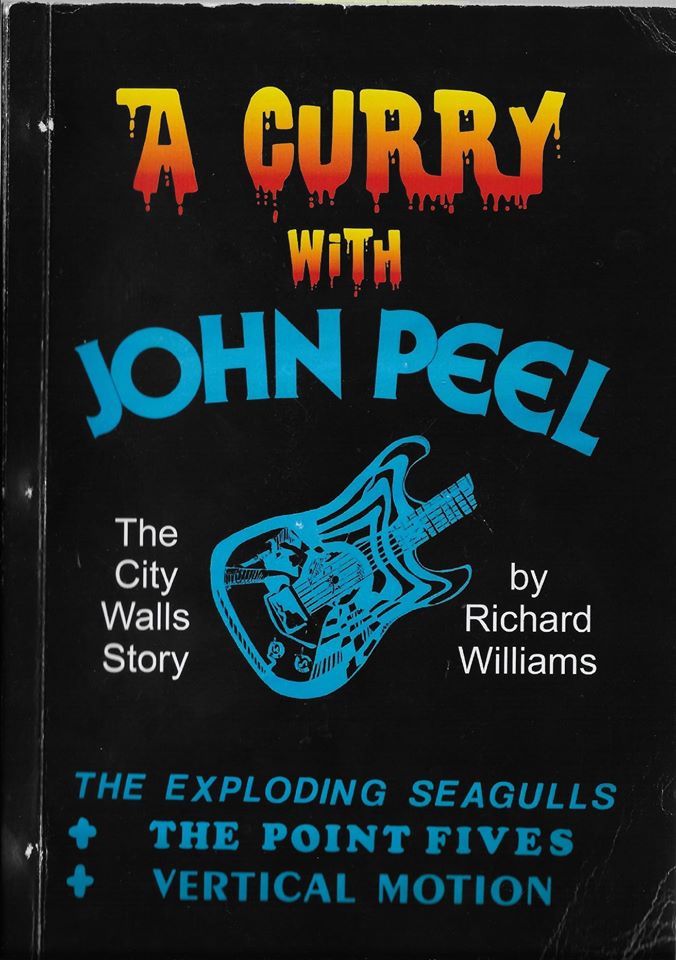 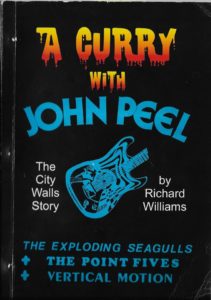 1980, Southampton. University student & music fan decides he wants to compile and release a local bands compilation LP, in the vein of Brightons Vaultage ’78 and Bristols ‘Avon Calling’… the thing is, he didn’t have a clue how to go about it, no experience, no money … this is the story of what happened and how it ended up with the author having a curry with John Peel.  It’s a car-crash-course in how not to become a music biz mogul.

Vaultage ’78 was the first, (to my knowledge) – a compilation of new bands from a specific geographical location  – Brighton in that case. Peel played it to death as it included Peter & The Test Tubies Babies Elvis Is Dead, the Piranhas, and the classic Lord Lucan Is Missing by the Dodgems.  Vaultage 79 included the Chefs and the Golinski Brothers ‘Bloody‘…

Pretty soon every city had one. Sheffield. Liverpool, Coventry… but it was the Portsmouth comp South Specific, which gave university student & campus radio DJ Richard Williams the idea to do one in is newly adopted home-town of Southampton.

In 1980 Southampton had a burgeoning independent music scene  with a variety of bands spanning the spectrum from post punk through to experimental via the post-industrial ‘Factory’ style of output. Following the release of an independent LP emerging down the M27 in Portsmouth a small group of students decided that they could do it just as well for Southampton. What transpired was an attempt to put out an album that swerved from avoiding one car crash to another, with the simple, but seemingly impossible goal of getting the music played by John Peel on Radio 1. This is the story of White Elephant Records, and their album, ‘City Walls’.

A Curry With John Peel is the full, detailed and entertaining account of how Richard -and a group of loyal friends – snatched defeat from the jaws of victory time and time again. Each stumbling block was somehow surmounted by luck rather than judgement.  Staff at the local record shops, Henrys in St Marys St and the Virgin Records store (where one of the employees was known only as ‘Big Fun’ and the other is now respected academic & author Philip Hoare) were helpful.  Before the internet and mobiles contact with bands necessitated trips in a trusty Hillman Avenger to pubs in the city suburbs.  The only person with any sense in the ‘White Elephant’ collective seemed to be Kate who offered tea and common-sense advice.

Williams narrative does come across as a bit Famous Five have a jolly time dabbling in post-punk-music with him (or the proof-reader) changing PA to Public Address system and referring to post-punk music as ‘indie’ throughout the book.  But at least he gives a scrupulously honest, warts-an-all account. Instead of painting himself as ‘cool and hip’ when he was naive, enthusiastic, and by his own admission lacked what are now called ‘people skills’.  It’s a journey of discovery and a steep ‘learning curve’. For any-one around at the time its a delve into the past and will be full of great memories of the people, places and gigs.  It’s also an interesting read I imagine for those in other towns and cities who were involved in similar student-music-scenes and cottage-industry record labels.

We have all read countless times about Factory and Creation records – so it is nice, in a way to read about the less successful attempts by others outside of London and Manchester trying to get a foothold in the music business.

I have to be honest: City Walls seemed a pretty disappointing album over-all (to a Wiltshire punk kid).  The production seemed as monochrome and as grey as the sleeve colours.   The Point Fives were a bouncy new wave/mod type band – the Exploding Seagulls -cool but strange in an XTC kinda way,   Games to Avoid – who were a really great live band who I saw a couple times (early Cure meets Wire style) – just sounded tame and neutered on disc – Inferior Complex (who reformed and are gigging again and signed to German Shepherd) sound “interesting-I’m sure-you’ll-agree” as Peel used to say but not as good as they have become in later years.

Also – as anyone from the Southampton music scene who wasn’t at Uni -will tell you. it didn’t represent the bands who were popular and important in the city -class of 77 punks Strate Jacket (who had become the Captains by 1980) and Catch 22 (members of whom later became The Men They Will Not Hang) because they were probably too cool to want do deal with ‘bloody students’ even if they had been asked.

One of the most interesting things in the book, to me, coming from a ‘punk’ background was how the album title was changed from the ‘controversial’, Derby Road (Southampton’s infamous Red Light District) to City Walls (historic landmark -see Wikipedia) partly due to the intervention of a local council department.   (Decades later Richard Williams ended up as head of the City Council!) 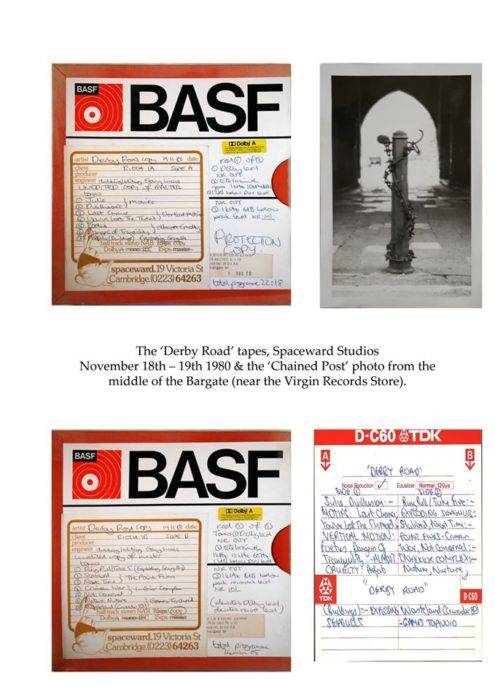 The account of meeting John Peel  at the album launch gig where he did the ‘disco’ – and a curry afterwards -is a highlight of the book – the man was generous with his time and support as he was with all artists and ventures where the motivations were love rather than money and art rather than fame. Williams recounts the tale beautifully and the image he paints of  himself – the gangling, starstruck 22 year old, 6 foot 4 – and the genial, avuncular DJ and hero ‘no more than 5 foot 8’ is very engaging.

Although the album wasn’t a resounding success it did kick-start a ‘thing’ in Southampton for multi-band local D-I-Y compilation albums  – from the Stick It In Your Ear tapes of the ’80’s to the Peacenik Tapes of the Nineties to the Taking Liberties compilation (reviewed here) in 2018.

What is highlighted to me personally (the man who has never finished the Oral History of the Southampton Punk Scene I started a decade ago…) is the gulf between the ‘local music scene’ and the University Campus and its enclosed world of ‘events, social socs and secs’ and how the two rarely engage with each other.  (Back in the 90’s non-students would have to be ‘signed in’ to gigs at the West Refectory by Student Union members.)  To this day Freshers Guides seem to always warn students of the dangers of certain streets in ‘town’ – where the pub venues are located and music thrives.  You do have to be careful getting home, but the venues and local bands are in need of support and always welcome cool-kids from the student population.

I’ve digressed… but A Curry With John Peel – is an interesting story from a hidden corner of the history of post-punk and indie music.  A tale of naivety and ambition, friendship and trial-&-error, an inspirational hero and dogged determination to get a foothold in an industry where nice-guys like the author, don’t tend to succeed.  Peel was the exception that proves the rule.