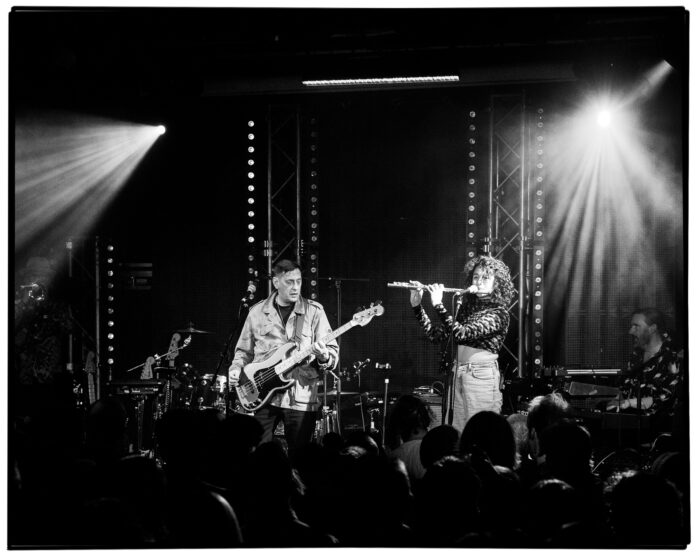 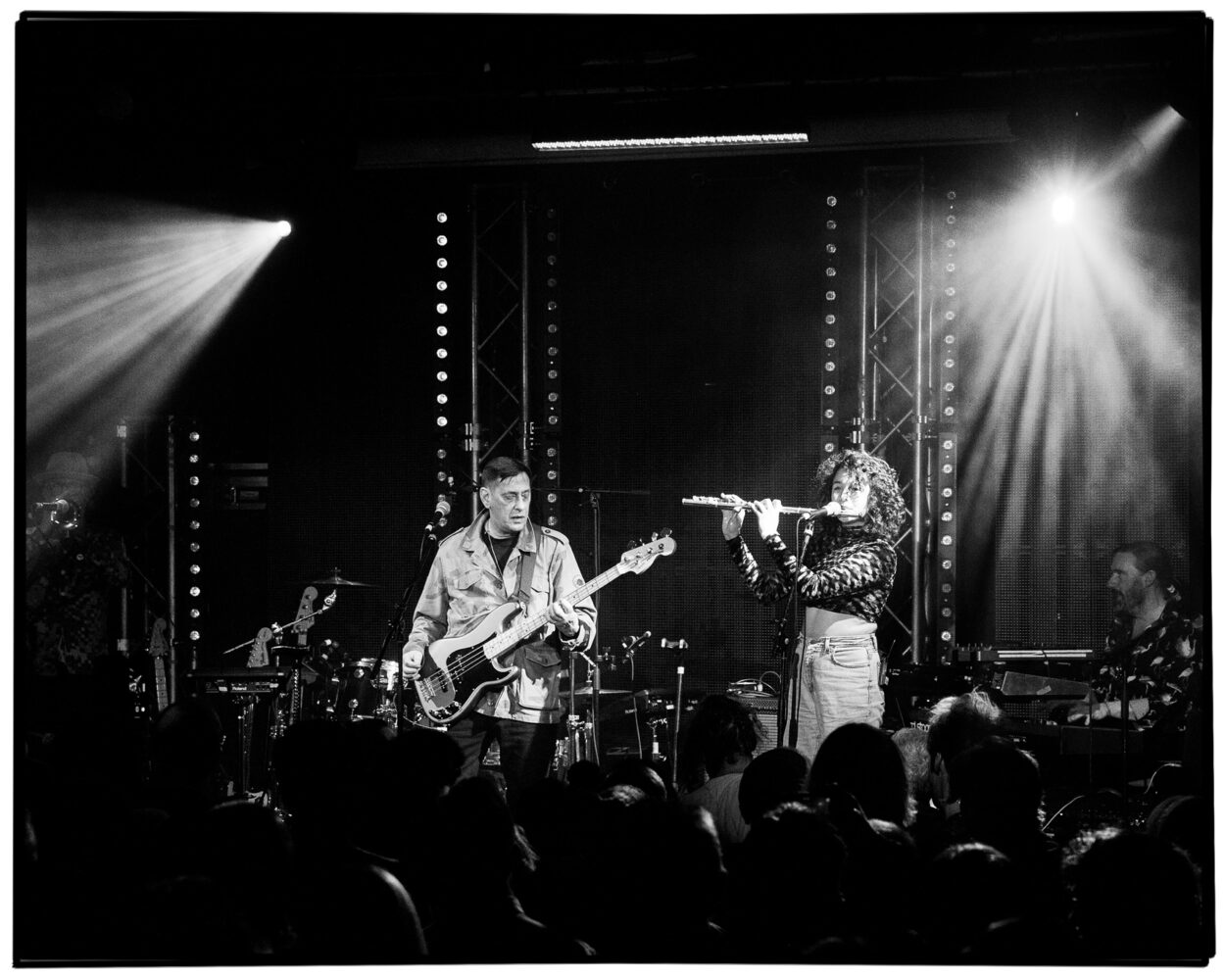 Classic Manchester legends A Certain Ratio play their hometown but, despite some difficulty, deliver more than a fair share of feeling for Ryan Walker to think about.

Emperor Machine is their official support for the UK tour. He, a one-man Soundsystem, and the group collaborated on the tune (called ACR vs. Emporer Machine) earlier this year. All rubber bass, slices of slick Studio 54 guitars, ACR, and VHS intermingling along with obsessive-compulsive 80s electronic undercurrents. It gets an airing tonight and remains a fantastic flash of a tune.

One man, the only man. Ball without Marc Almond, Chris Lowe without Neil Tennant, Martin Rev without Alan Vega, wet with energy, endless wires from the ribcage of the machinery spill onto the floor with heat-seeking mechanical melodies firing from all sources of in and output. An exhibition of electronic experimentation, a man lost, a man found, a man having fun with his toys in his public bedroom (Frankie Knuckle’s studio built in the vanishing point with a voodoo ray looking for eyes to hypnotise).

A Certain Ratio take to the stage next. They’re about an hour late, but one cannot help but observe the venue is increasingly packing itself from the bar to the front of the stage. An amassment of fans. An amalgamation of personalities standing shoulder to shoulder below a spell of spinning purple and blue lights that beam down from the low, industrial ceilings.

Drumpads fail to be coaxed out of making a sound with a crazy face work properly (of course, they don’t…it would be nice if they did, but it’s funny and suggestive of something spiritual that the drumpads, a symbol of something distinctly 80s and alien, do not work).

Keys don’t work, microphone doesn’t after attempts at tapping it (of course they don’t) Because the PA doesn’t work (of course, it don’t) But worry not.

Shack Up still slaps and the cowbell is collected by singer and bassist Jezz Kerr with a samba whistle strung around his neck for Yo-Yo Gi from renaissance piece, Loco from 2020, their first in two decades. A cool, muscle-fun and machine-fierce Krafwerkian computer groove palpitating techno workout. And the in-between song banter is charming. Indicating the strength in a band’s cult following if technology can potentially torture the music but doesn’t stand a chance if the cult in question finds the primitive, instinctual nature of their poignant convergence of gooey, translucent, swamp-funk, plus a pulse of volcanic-industrial soundscapes to be worth a fair if not all the portion of their undefeated appeal.

But the band pushes on, I Won’t Stop Loving You sees a couple before me share a kiss and a cuddle. She has a bad back, he gave her his seat, bald lad from the Hacienda days in his samba slippers, but the sentiment is sweet and the song is even sweeter; a fine way to possibly recover the attention of the room that never dwindled, but just needed a touch of that euphoric groove to be seduced to. Houses in Motion is hot. A man carrying a single crutch raises it to the air. An act of ascending to the atmospheres above and avoiding the injury that physically hijacks him, yet musically, and mentally, he is one with everyone at the dada dub discos of outer space, a literal Flight, a heart in motion. 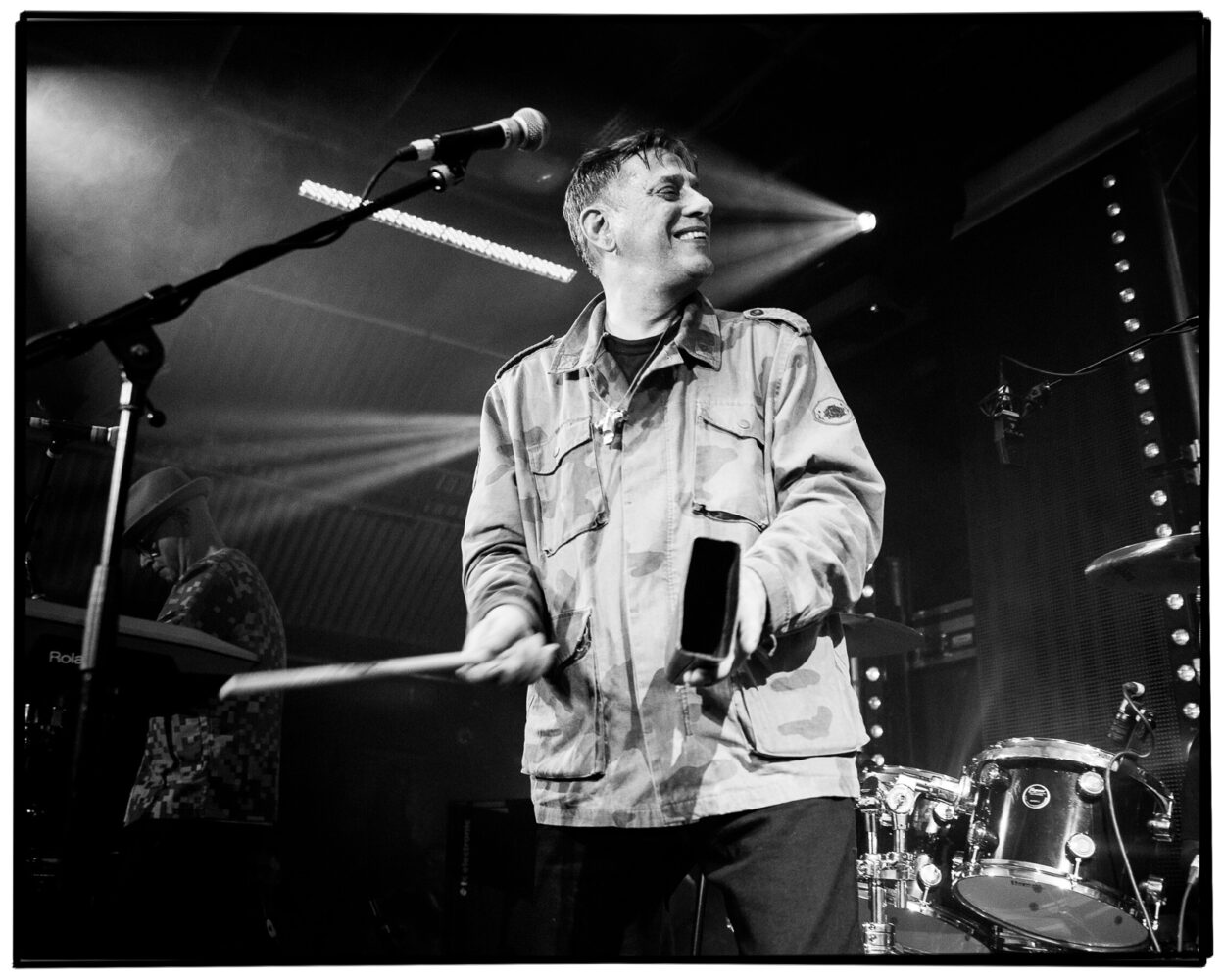 Professionally I should end it there but fuck off and stay with me.

This was, and always is, no matter the venue, a perfect environment for A Certain Ratio to stage; to situate 2 things.

1) A band at the peak of their powers currently undertaking a UK tour with their latest collaborator Emperor Machine as their staple support.

2) A band who have successfully stepped out of the volatile shadow that a Manchester with a Hacienda at its epicentre often unwittingly cast as a series of shackles on its beloved brothers and sisters, its heroes and villains, its lovers, and its haters. In turn, metamorphose themselves into a band that belongs with Mute in a way that makes nothing but perfect sense.

3) A band who because of the above, appear fully equipped as arbiters with one foot in then and one foot firmly in the now, performing as purveyors unable to be tangled up in one specific section of one specific history with an audience member to match it but care more about the coalescence, the consolidation of different worlds, past and future blending into one brilliant burst of energy with ACR as the capable curators of its modern sound.

A band with more material than we thought any band from ‘their rightful time’ to be able of unveiling to this kind of quality, standing so deep in the vibrancy and idiosyncrasy of their output that they must have surely done something right to survive one era’s colours transitioning into another and still live to sign a dotted line, to fight another day as a legendary band who didn’t just experience, but were a clear, somewhat overlooked, but certainly, integral part of that endlessly published piece of experimental history. Exponents of something that still permeates the modern-day riot of nostalgia diet to get high on when you ride it (again, not a bad thing you must realise) whereby Manchester and more broadly, the North…or the North, and more specifically, Manchester, was the (re)evolutionary embryo for punk and new wave and electronica and all that unwinds in its wake to rear its collapsing head. 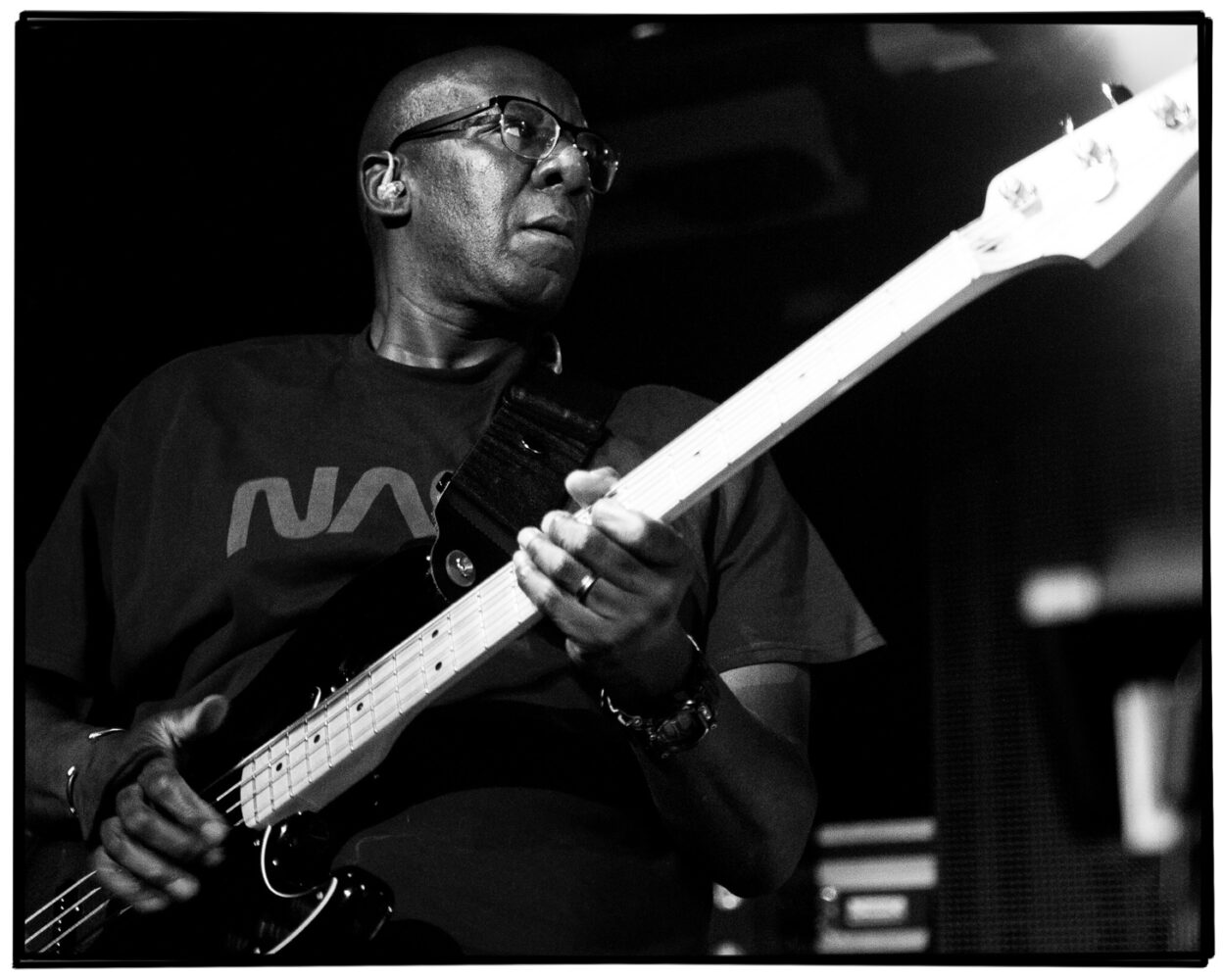 The band’s abilities and smashing of styles in the true nature of post-punk, to steal and scour and sharpen and invent and innovate in the aftermath of pretty punks and safety pins, injected a fabulous, fresh spectrum of illustrious vital light into the mainframe of the day. And along with contemporaries that redecorated the map with little respect for the adherence of traditional business paradigms, emerged like a unit of Russian Constructivist seditionaries adorning the wonky bodies of skinny white boys hitting things purposefully in a skewed, screwed-up pop band. Transcending audiences from the pits of themselves post-Curtis suicide with haunted bass warbles of hallucinatory, electro-punk and pickaxe into crystal synthesis of factory-floor funk, forcefully, if awkwardly installed into a heavily, depressive, overcast of doom and gloom.

The group fluidly introduced their pumped-up, post-‘official’ and in a sense, nominal Factory debut, their very own version New Order’s Movement, with Hannett in his lab, sat behind and steering the studio wheels (the excellent skeletal, yet indestructible mechanical pounce of To Each’s concentrated, wild, tribalism from ’81) straight into the brains of a Manchester rebranding itself as Berlin whilst concurrently reigniting the notions of what things can become. What cool, timeless beauty in the truth of situationist cultural clues. Whilst also delivering their perceptions of Latin American-inspired elasticated sunken-cheek art-world Warhol pop and funk-noise directly into the veins of those of the philosophizing life.

Sat from the comforts of one’s armchair in student halls whilst reading that withered library book (Debord or Depero) in that weathered overcoat (Oxfam or Oi Polloi). Sextet from ’82 putting this idea, along with a handful of other great, intelligible denizens to the dank, Futurist shifts in graphic design, composition, and the irritability of a naturally forming, photographic wasteland, with just about everyone doing something and everything somehow glowing as one of many examples to pick from, in a way distinctly right for ACR, right now.

Right’ could indicate new critically-acclaimed, fantastically received new albums (Loco featuring Sink Ya Teeth) including a string of solid, cutting-edge EPs (EPs A, C, and finally, R), a remix album (Loco Remezclada featuring Andrew Weatherall), never dropping in standards, their intrepid design, nor disappointing their audience. Managing to manipulate fate every time and captivate another strand of the imagination. An Entire Sense Ratio really springing to the foreground of impeccable, indie thought on a grand scale with a deep, electric helix coiled and built by hip-hop and acid-jazz, dub-disco and dance, ambience and house, no-wave and post-punk, and Can.

Methods to showcase their heads and hearts as very much fascinated and functional when working on new ideas with new blood, collaborators of all kinds, the anthologising of classic, early albums in a noir design, stripped of colour, but radiating more so in how stark it contrasts to other LPs that surround it on the timeline’s vast shelf. Their debut for Factory, their actual debut that is, the 1980s The Graveyard and the Ballroom, to acr:mcr a decade later and ALL those nuances and permutations of the band that breathes between included as demonstrations of this all-encompassing ethic.

‘Right’ by the absence of a standard greatest hits tour, but always playing live, always appearing to work. Still smart enough to understand their impression on people is irreplaceable. To represent the familiar, to express the uniqueness of how they unfold and innovate, retaining the essence of the group but still a band most definitely on the move, constant percussive motion with scope and cohesive vision.

Distinct things that, perhaps, their peers have not appreciated as much. Not to the same progressive level. To the same pioneering jam. Or at least, not in the same way. Which is what we want. We don’t want sameness. We want a mixed bag. A series of episodes. Related to the same wellspring, but we take what healing properties from such a thing that we so please.

Figures with a wish and their own fixed script, chroniclers of a well-trodden path that has, for their own reasons and in one way or another (no judgment here) superseded music, supplanting it with daft roles in dark industries to simply stay above the rising tides of time. 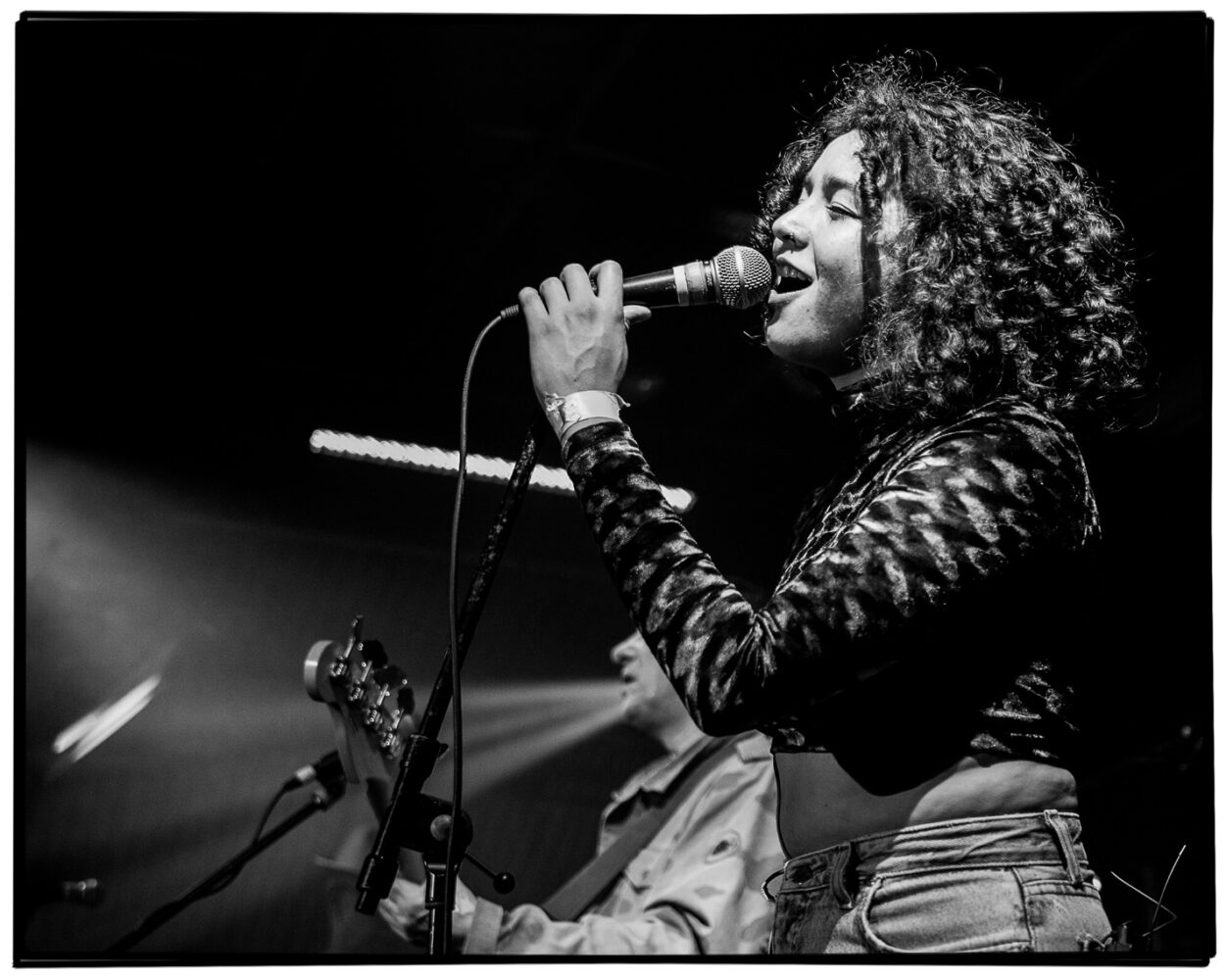 But A Certain Ratio, in keeping with this theme of them as being a band prolific entity of many musical minds, multidisciplinary in one way and scarce, space, naked of too much ability to over-intellectualise in another, a carnival of voices and musicians, swamp funk and acid-punk grooves, always somehow swim.

They’re an hour late, yes, sure, fine. But the kind of band they are, the kinds of branches they grew from, and the kinds of trees they have grown so splendidly into – they can afford to turn up an hour late.

In fact, if a time so heavily ingrained in the DNA that pulsates and pumps throughout the veins of ACR, a history that placed precedence of art over commerce, history and its makings over money and the intoxicating cruelties that come with it; it would be rude for them not to turn up an hour fucking late because of a faulty PA/it would be rude for them not to. It makes sense. It fits. And therefore, I leave satisfied. A fan. A flickering of visions. A part of the instantaneous moment. A part of an instant history.

Photo credit @Sal_GigJunkie, you can find her work on Facebook