Home Books UK Book Reviews A Band with Built-in Hate: The Who – from Pop Art to... 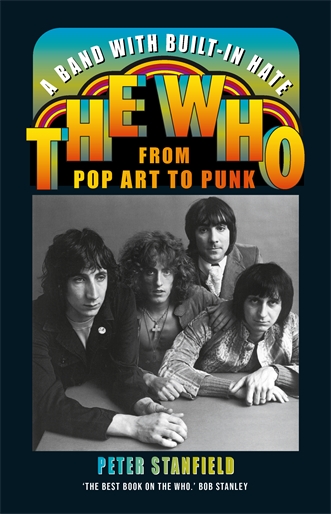 A Band with Built-in Hate: The Who – from Pop Art to Punk by Peter Stanfield.

Talkin’ ‘Bout My Generation – The Who have always been special to me as the first group I saw live at the Finsbury Park Astoria in 1966, so I’m always interested in any new book on them. Author Peter Stanfield usually writes about films, but clearly has plenty of love and knowledge of the music scene and beyond from the Who’s late 60’s heyday, and has come up with a book that finds an interesting perspective on the influence of the 60’s Pop Art movement on the group and their managers.

Books on the Who generally concentrate on the ‘major works,’ Tommy and Quadrophenia, along with the Who’s Next and Live at Leeds albums, but Peter Stanfield makes a very convincing case for their second and third albums – A Quick One & Who Sell Out – to be just as important. Critics often hurry past them in their rush to tuck into the main course of Tommy and Quadrophenia.

The book’s really strong when it comes to identifying the rapidly changing 60’s musical scene – it now looks all very exciting and inevitable, as Beat Groups morphed into Rock Bands but at the time the old Tin Pan Alley die-hard managers, record labels and promoters all assumed (and hoped) that it’d be just another craze to be cashed in on before going the way of the hula hoop.

In fact, the scene went from strength to strength, with the pirate stations’ commitment to the music led to a period of intense competition which led to some of the greatest pop/rock ever in my honest opinion. By 1966 teens like me wanted our own sounds to follow, and found them in the Who, the Small Faces, the Kinks, Animals and Them – “freakbeat”, as the author calls them. This works pretty well as full blown psychedelia was just around the corner, and was already an influence in the early West Coast sounds of Love and the Doors.

The group’s first LP, My Generation, was typical of most debut albums of the time– the natural attempt at catching the group’s live set in all its glory. The author shows how on A Quick One the Who are still referencing their influences and inspirations – principally the Everley Brothers, surf music, Tamla Motown and James Brown – while at the same time taking the first steps towards their own style, as Pete Townshend’s songwriting develops its own voice in the ambitious title track and So Sad About Us.

This was followed rapidly by Who Sell Out, which showed the group moving to another level musically and lyrically. Here the influences have been absorbed but now the group had the confidence to move on beyond imitation. Peter Stanfield points out the superb singing throughout the album, as Roger Daltrey leaves behind any mid-Atlantic tones, and is just as convincing on the acoustic tracks as the rock songs. There are some beautiful surf-inspired harmonies, and vocal arrangements – combined with some great songs like Tattoo, Mary Anne with the Shaky Hand, I Can See for Miles, Odorono and the Tommy pre-shadow Rael all showing a new level of wit and insight.

The Pop Art theme is made explicit in the cover artwork (again – leading pop artist Alan Aldridge had done the cover for A Quick One) and spoof jingles, reflecting the massive power of pirate radio at the time. Manager Kit Lambert always talked a great game and was eager to promote the group as being in the same territory as the (albeit wildly different) artwork of Warhol and Lichtenstein.

There’s some very perceptive writing on the influence the Who had on the wider scene, trying to disentangle inspired followers – like the Creation. Misunderstood, Tomorrow or the Eyes of Blue, for example – from the cash-in copyists like the Action or the early Move, and the fairly superficial referencing of radical Pop Art theorists like Gustav Metzger and his Auto Destruction projects.

The book records how the story moves on through the abandoned Lifehouse project, (with some very interesting material I hadn’t seen before about various attempted collaborations with pop art writer supreme Nik Cohn), till the punk explosion shows up the disparities between the Who’s megastar status (only rivalled at the time by the Stones and Led Zeppelin) and the demands of “keeping it real” as the 60’s good times gave way to 70’s unemployment and paranoia.

It’s a pity that the two surviving Who members didn’t contribute directly to the book, but it doesn’t matter that much given Pete Townshend’s willingness at the time to talk about the group’s work (and just about anything else) often at great length in the underground press. Inevitably, the book can’t help petering out a bit towards the end – like the group’s career – the author conceding that for all Townshend’s attempts to keep the group relevant, albums like Face Dances and It’s Hard were in the end simply more product to add to the pile of compilations and reissues.

I guess this is where I come to my one issue with the book – the title. I’d love to know if it was the author’s idea or added later. Sure, ‘A Band with Built-In Hate’ would be fine for a book recounting what happened when Roger Daltrey flushed Keith Moon’s speed down the toilet, or the many Daltrey/Townshend fall-outs and reconciliations, but it doesn’t reflect the much wider scope of the book. Anger was certainly an important part of the Who psyche, especially early on, against the stuffy mainstream culture and its patronising repressive attitude to pop music and youth culture in general, but that’s only part of the story – as the book shows.

But don’t let that detract from a book which is essential reading for anyone who’s ever loved the Who, or wants an insight into the Sixties’ music scene that goes beyond greatest hits compilations and easy generalisations.

You can purchase the book here: