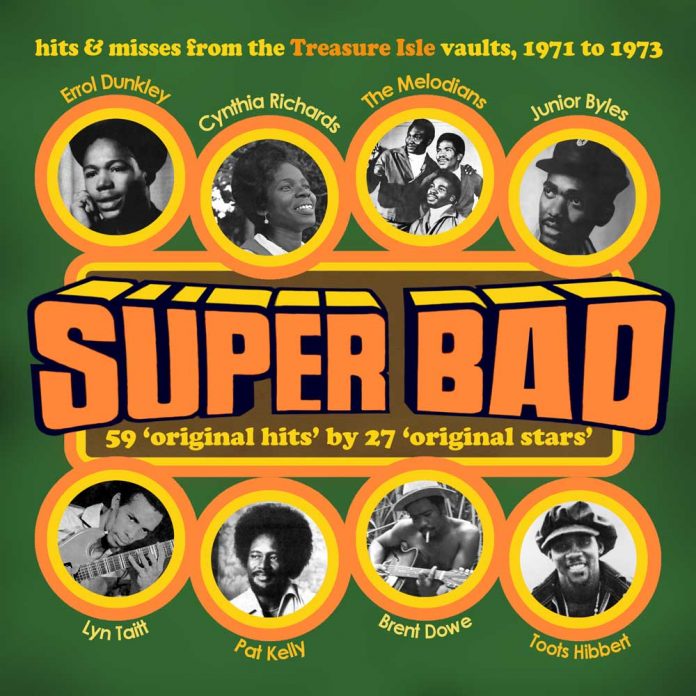 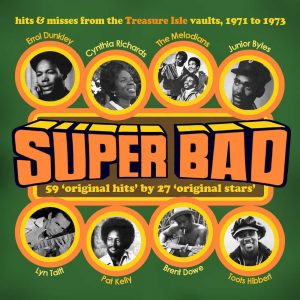 New 2CD collection of Treasure Isle hits and misses, recorded at Duke Reid’s studio between 1971 to 1973 and with 33 tracks being available for the first time on CD. Artists of the stature of Toots Hibbert, The Melodians and Justin Hinds contribute. Ian Canty tries not to blot his copy book…

Duke Reid and his Treasure Isle imprint were already assured of a prominent place in the history of Jamaican music by 1971, with an admirably rich history going back a decade or so. The Duke’s recent work with the toasting DJ specialist U-Roy and later Dennis Alcapone had thrust him and TI right back to the cutting edge of reggae and as a result rejuvenated the label’s fortunes. However, the start of the new decade saw some turbulence. A big change occurred during this time as Reid’s right-hand man, the talented Byron Smith, left Treasure Isle and was replaced by up and coming young gun Errol Brown as engineer. Duke himself also started to encounter the health problems that would lead to his death only a few years later and the period covered here could be seen as effectively the last hurrah for Duke Reid’s Treasure Isle, before Sonia Pottinger took the reins.

People familiar with the previous Doctor Bird Duke Reid reissues will pretty much know the format by now. This is perhaps undemanding but very pleasurable reggae music, embossed with a true mark of quality. Super Bad is made up of Treasure Isle single sides from 1973 to 1973, with some being hits and others misses. These items are sometimes followed by instrumental takes on the same rhythm, for example The Ethiopians’ lovely Pride comes just before Depth Charge, a sax-led version by Tommy McCook & The Supersonics

The velvet tones of JBC disc jockey Jeff Dixon aka J.D. The Rock toasts the opening title track over the structure over the John Holt and Joya Landis fave I’ll Be Lonely, but it is the only pure DJ effort included. I always enjoy hearing Cynthia Richards’ emotive delivery of a song, even if (I Love You For) Sentimental Reasons isn’t quite the strongest material. Her treatment of it is charming and the imaginative and funky Hit The Bridge is cool as ice, really excellent and well worth your time. Her spiritual and full throttle performance of Ally I is followed immediately by a version by the group who took over from The Supersonics as Treasures Isle’s studio outfit, Duke Reid All Stars. She also duets with Brent Dowe on Strings Of My Heart, cut by BD under his Porkey nickname.

The Silvertones’ Delroy Denton gives us a wonderfully committed vocal performance on a touching Broken Hearted Melody and it gets a good instrumental cut from Tommy & The Supersonics too. Eddie, sometimes Eddy, Ford may be one of the more obscure names featured on Super Bad. He recorded for Joe Gibbs before his two offerings here, the sweet reggae soul with patois chat of Jango and a sinuous Guess I This Riddle. Mouth Trombone by Vincent Hinds is exactly what you would expect from the title, a novelty item really, but You’re The One I Love by Dorothy Russell is instantly endearing, aided in no small way by some nice guitar work. Information about Dorothy is sketchy, but she also duetted with the great Ken Parker on Sincerely.

The Eagles (No! Not them) had started out in the mid-60s with Duke Reid’s rival Coxsone Dodd. But by the 1970s they had moved over to Treasure Isle. Here they give us a fine cool vocal group sound in Your Enemy Can’t Hurt You and a organ-heavy Rub It Down, with the latter having a passing resemblance to Toots & The Maytals’ Monkey Man. Taking The Only Living Boy In New York as source material, The Tennors pull a similarly satisfying trick on Weather Report and the prolific Freddie McKay is caught on a rare but accomplished Treasure Isle outing entitled If I Should Make It.

There weren’t many acts who were as constant a presence at Treasure Isle more than Justin Hinds & Dominoes, so it is only right and proper that they are here with the very jolly two part Mighty Redeemer. Tommy McCook bring disc one of Super Bad to its end with the laidback groove of Buck And The Preacher.

We move to disc two of Super Bad with Leroy Sibbles and Junior Byles teaming up on the very catchy, gently skanking Break Up To Make Up. Junior also is represented by Oh Lardy Dah, from his only other Treasure Isle 45. We get another echoing soul reggae belter from Cynthia Richards called Clean Up Woman and then we meet The Willows, led by a singer named Wesley, who also recorded as The Millions on Downtown Records. Their contributions here are Watch A Whisper, a good close harmony number that is followed by a Tommy McCook/Supersonics instro cut and the joyous sound of A-So, which comes complete with a bit of country guitar picking.

Another elusive character is one Albert Tulloch, who only seems to have recorded the mid-paced and soulful He’s An Older Man for Duke Reid in 1973. Far better known of course are The Melodians, one of the key vocal groups of the rocksteady era, who yield a tender Passion Love and Love Makes The World Go Round, the latter of which is delicately heartfelt.

Errol Dunkley shines with the exuberance only youth can bring on Where Must I Go and the tougher Girl You Cried is wonderful. Then we have The Saints, another singing group with a history going back to the mid-1960s. Their gospel-flecked How Long (Must I Wait) and the bright Feeling Good made up the two sides of a superb 1973 single.

Lyn Taitt’s guitar takes centre stage on Adam 12 and Pat Kelly, formerly of The Techniques, pitches his delightful voice marvellously on Nobody (actually a rejigged cover of Bob Dylan’s Just Like A Woman) and Brand New Me. Jamaican music veteran Lascelles Perkins revives the oldie Sentimental Journey and Roof Over My Head by Noel Bunny Brown is sweetly sung and enchanting. Finally, whilst The Maytals were contracted to Island, Toots Hibbert recorded a single for Reid entitled I Feel The Spirit, with The Now Generation backing him. The two sides of this record bring Super Bad to a close. It’s a very r&b/funk influenced sound, a step away from TI’s core values, although as you would imagine excellently sung and played.

Though perhaps not quite the very finest period in Treasure Isle’s illustrious history, Super Bad makes a fair enough case for the works Reid, Smith and Brown put together from 1971 to 1973. There is a wealth of talent to admire through the 2CDs. I found some very listenable tunes and danceable rhythms that were new to me, which is absolute boon to a reggae nut like myself. Super Bad, with big names and lesser known artists stepping up, is full of the kind of joy which melts the heart.