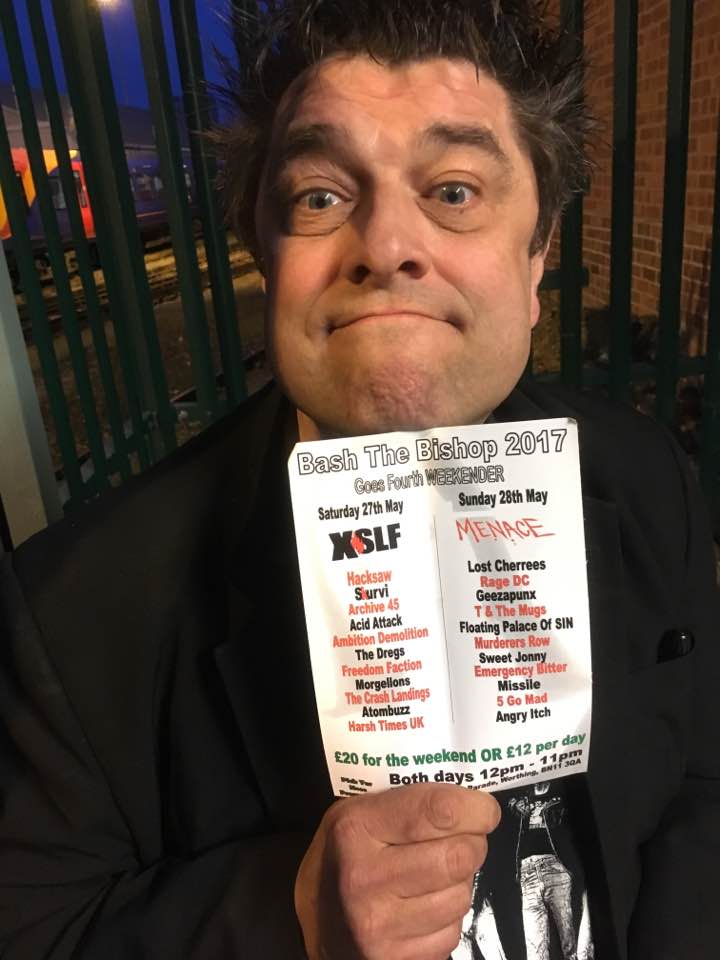 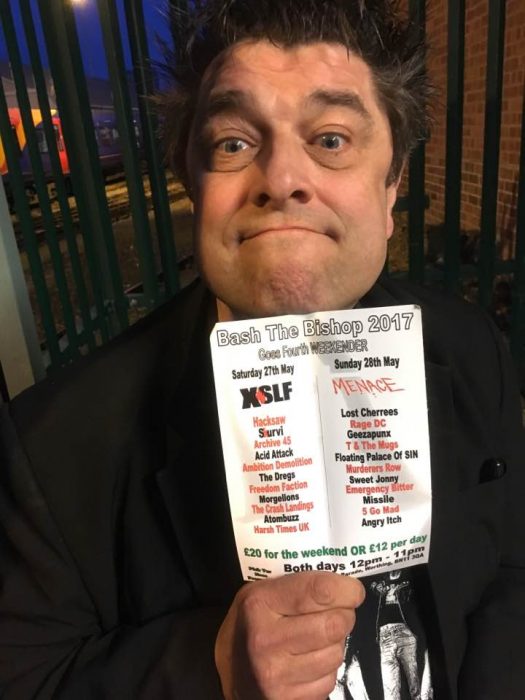 Forty Years On from 1977 and (Old School) Punk’s still not dead -it lives on in social clubs and local pubs… Ged Babey tries to choose between a ‘critical theory’ and ‘kids are united’ style as he reviews one and previews another.

I’m back /  in full attack / Never give in until they crack.  Emmmeeeeerrrrrrrrgency! Emmmeeerrrrrrr-gency!

999 are still the hardest-working band in Punk.

Despite being as old as the hills they are still a great rock’n’roll band.

This was a cracking, packed gig. I’m glad I went.

In The Beginning… Punk Rock was  not the voice or the music of the working class.  It was an art-school London clique of exhibitionists and chancers.  Discuss.

What they did have though, by chance rather than design were a couple of brilliant, inspirational ideas, (Keep it simple/keep it raw/Do It Yourself ‘Here’s three chords – now form a band’)  which did change the cultural landscape and indeed peoples lives.

What ‘Punk’ became though was several loosely-affiliated groups of people who made it their own.  Anarchists, hooligans, careerists, under different banners and labels.  One such community were the younger ‘kids like me and you’ from the provinces who believed fervently that punk was the means of expression of the working class… and they are the ones who lived and breathed it, more so than the actual originators and progenitors. Punk-snobs, the It-was-over-by-’78 brigade always blame Jimmy Pursey…

Today, we are looking at these punk fun-da-mentalists who for forty years have stuck to their belief that loud and fast rock’n’roll is all you need to survive life’s ups & downs, swings & roundabouts and successive governments that despise those at the bottom of the socio-economic strata.

(Can you tell I’ve been talking to Professor Russ Bestley who invited me to write for his ‘academic journal’? )

A night out on a Friday in Portsmouth (at a punk gig) is always a guaranteed fun time. The people are great; funny, friendly, nutty and the beer is cheap. The music is blasted out through old equipment and is raw and action-packed.   Now that the Barn is closed seemingly for good it looks like the Rifle Club ( right near Fratton rail Station) is gonna become the spiritual home of Pompey Punk.  It’s a great little venue despite resembling a good old fashioned Wheeltappers and Shunters type Social Club.  The smokers terrace looks on to the railway tracks, the doormen are polite and younger than most of the clientele and it’s cheap and friendly and straight out of the late Seventies only without the clouds of smoke indoors.

The average age of the punters I would guess at being 49. There are some younger ones, but usually they are the offspring of the older ones.  Looked at from the outside in that way that fly-on-the-wall television programme makers and smug media bastards do, it could be seen as a bit of a sad, depressing gathering of middle-aged misfits “re-living their youth”. Punks after all mocked Teddy Boys for being relics… Or did they?  Was that just a load of tabloid nonsense based on a solitary incident?

Portsmouth has a lot of retro-50’s hair and threads  as well as former skinheads, mods, punks  who are now one joined-up multi-faceted tribe which comes together under a new banner; Old Youth Cults with a bit of Style and Attitude. ( I was gonna say C*nts but I wanna keep my teeth next time I go to Pompey).

The wonderful Archive 45 couldn’t play as their bassist had been rushed to hospital with appendicitis. A lesser band would’ve played anyway with a stand-in, but out of fraternal loyalty they didn’t.

UK82 punk’n’proud workaholics 5 Go Mad played a great support set, including their soon to be released contribution to the Top of the Punks charity compilation album as well as their usual singalong classics.  Wozza bared his arse, Angie and Pam invaded the stage to sing backing vocals on What Shall We Do.. with a drunken punk-band. They are the ideal band for gigs like this and really are getting better with every gig they play. They went down a storm. (Rory Greener has made a great little mini-documentary which shows their serious side.)

As for 999… well despite being down to two of the original line-up – Nick Cash and Guy Days – with Arthur from the Lurkers on bass and a drummer who I’m sure I know from somewhere – are still the great live band they’ve always been.  Under-rated by the press from the start but always loved by the kids.  Everyone wants and gets the classics;  Emergency, Homicide,  No Pity, Feeling Alright With The Crew and yeah, the band look their age, but still sound fabulous.  They went down an absolute storm.

I noticed the only CD on sale at the merch stall was the comparatively recent Death In Soho ( which it actually very good indeed – I reacquainted myself with it the next day) because everyone has already got everything else by the band. There’s a great interview here about the album which actually came out ten years ago now.

Hopefully they sold a few as the songs fitted in seamlessly with the old classics.  Watching 999 -at the time -they seem no ‘slower’ or less dynamic musically than they ever did. Guy Days really is Englands’ Johnny Thunders as far as his playing is concerned,   Nick Cash’s voice is less of a whine too now he’s older!  He might well say ” I love you (insert name of city)’ at every gig he plays – but when he shouts  ” I fuckin’ love playing Portsmouth” you really do get the feeling he ‘means it maan’.

Feeling Alright  With the Crew?  Not ‘arf! 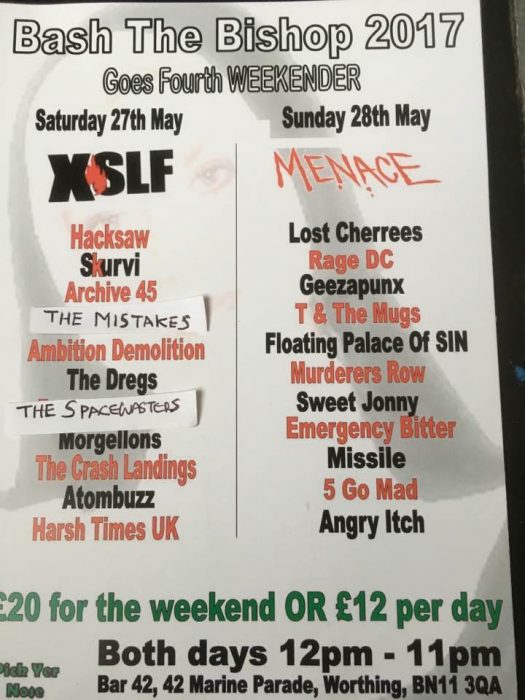 Whilst we are on the subject of cheap and nasty, punk and proud, do-it-yerself, low budget, high-energy gigs…. here is a cracker coming up in a few weeks;

the Bash The Bishop Goes Fourth Weekender. Saturday May 27th and Sunday May 28th 2017 at Bar 42 Worthing

Basically it’s the fourth time they’ve done this –  two days of beer and loads of bands -here’s the full list;

Gosport PunkFest sees the return of 999 plus a full supporting cast  including On Trial UK, Foreign Legion, 5 Go Mad, Acid Attack, The Glorias, Night of Treason, Gran Torinos and Watch You Drown –