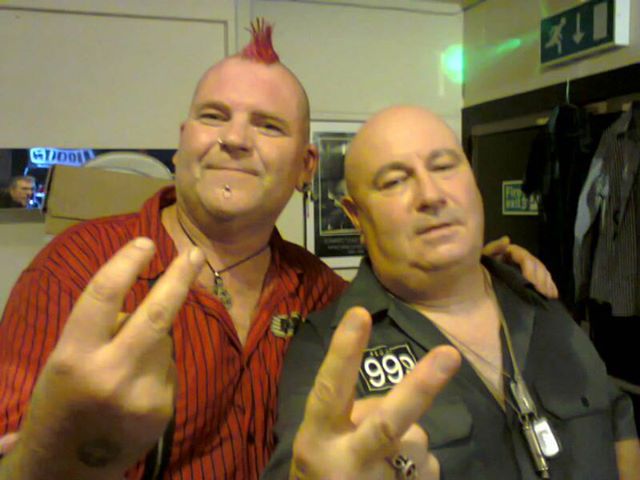 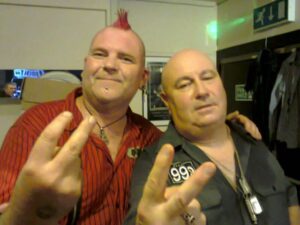 999 | Night of Treason | The Flying Alexanders

A Sunday night warm up gig for this weekends Rebellion Festival saw old -timers 999 playing an absolute blinder. A sceptical Ged Babey ended up feeling alright with the crew.

Heads promoter Jurassic Mark can pull together a shit-hot supporting bill to be sure … youngsters Arid Wave (terrible name guys for fucksake change it) play before people had a chance to down their first pint, but seem to have a lot of a potential although they need to find their own sound and identity and stop looking to America for inspiration. Good drummer and a growing fanbase of friends and nutters, but file under Ones to Look out for in 6 Months for now. 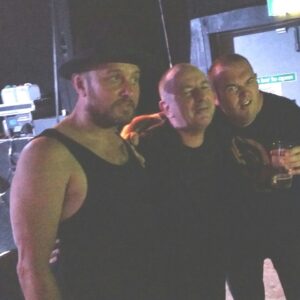 The Flying Alexanders have been playing since before Arid Wave were born and are one of those bands that, although inspired originally by punk, have become low-budget, local scene, rock ‘n’ roll heroes who can play to mods, ska-punks, blues-rock audiences and just plain old lovers of beer, dancing and good-times and go down a storm. Songs like Quality Time and Soul Train are upbeat, sing-a-long anthems and new material like Dark Horse and the Bash street Kids bode well for their forthcoming album. Guitarist Perry, resplendent in wifebeater vest and Steptoe hat, was on great form, cranking out solos and squeezing out sparks. The fact he’s also in acoustic bluesy hillbilly combo Johnny Boxcars seems to have made his playing in the Alexanders tougher and more meaty.

Night of Treason from Gosport make their debut at Rebellion this year on the back of the success of their Gentlemen & Hooligans album. Despite missing a rhythmn guitarist they still managed to play a storming set as a four piece. the Ballad of the Teddy Boy from Ladbroke Grove, for me, remaining the pinnacle of their set songwise. The great thing about Treason is the way they mix and shuffle 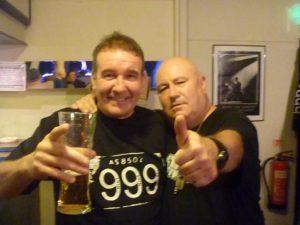 the ramalama and the melodic sides of the coin whereas lesser bands get a bit samey. Bill is a guitar hero too, his lead playing muscular and tender like a true gentleman hooligan. Try and catch them on the Casbah stage at Blackpool.

Southampton always had its 999 fans way back in the early days. Before tattoos were everywhere, the 999 raffle-ticket logo inked the skin of fanatics Stu and Ginge. There were road trips to see them in far off places captured in yellowing Kodak instamatic snaps. 999 were punk rock heroes and as strange as it may sound in 2014 they were talked of in the same breath as the Pistols, the Clash and the Damned. They were on-a-par with the now iconic, the legendary and the Damned.  The press, and later the guardians and curators of Punk History, have all-but written 999 out of the story (along with the Lurkers and Eater.) They were, and still are 37 years on, a really great rock ‘n’ roll band. Guy Days has always been a brilliant guitar-player, an English Thunders in fact (natural talent, style & sound & simplicity being more important than technical virtuosity.) 999 singles, when played back to back are just as sheer pop / punk genius as UA labelmates Buzzcocks who were signed-up at the same time. 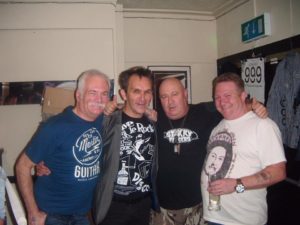 Younger, mainstream commentators always describe 999 now as ‘fat and old and second-division, third-rate, tired-old-punks’ which is deeply insulting as, once they hit the stage and crank it up, they are as good as ever. The decades melt away and the hooks, choruses and tunes are as vibrant and invincible as ever.

Nick Cash is 64 this year and the rest probably somewhere near, but it just means his mewling yelp of a vocal style is a bit more gruff and an octave lower maybe.

It is the first two albums and initial run of singles which make up the bulk of the set and are the best-received crowd-pleasers, but there’s no dip in quality or energy from begining to end.

999 have had a few months off and consequently getting back in the saddle for Rebellion meant that they were particularly fresh and on-form as this was a fabulous performance and a great night out.

I’m not a diehard fan but have seen the 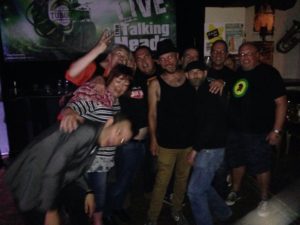 m at least once every decade since the 80s and thinking back, they really never do disappoint.

Happy to man their own t-shirt stall and pose for photos, Nick Cash seems happy with his lot as a low-profile cult hero.

What a fabulous night. Nostalgia yeah, but it felt good. It felt real and it made you feel like “I’m alive”.

Another band to look out for at Rebellion is American NYC HC legends Reagan Youth who now feature my old nemesis Tibbie X on bass. The coolest female bassist since Gaye Advert.

All words by Ged Babey – and dodgy snaps taken from various peoples Facebooks without permission but with love.