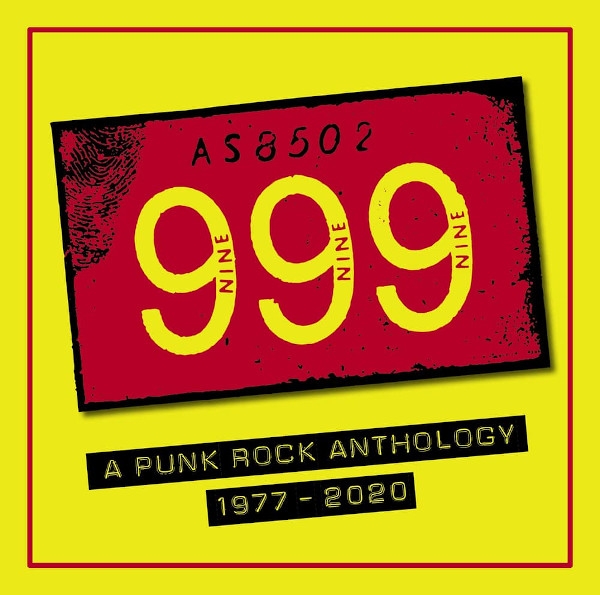 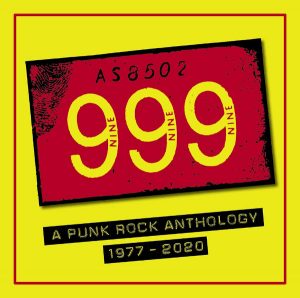 Captain Oi! release a double CD of the collected works of 999 covering their output from 1977 to 2020. Nathan Brown celebrates the band as a highlight of first wave punk who refused to die.

999 are a band occasionally overlooked in tales of early punk but whose impact is arguably greater than acknowledged. They were one of the brightest and fastest of the first wave of punk bands. Before there was such a thing as “hardcore” , 999 were pushing the speed and style of punk in that direction. This may be why they went down particularly well in the US. Just a few weeks ago I noticed a member of Bikini Kill was wearing a 999 shirt in some 1990s archive footage.

Nick Cash had one of the most excited and expressive sounding voices from those early days of punk. Like Tigger in drainpipes, he bounced out of the stereo and into your front room. Guy Days’ guitar buzzed and then wailed into solos somewhere between a glam rocker and Chuck Berry on speed. The rhythm section of Pablo Labritain and Jon Watson was tight and dynamic – aggressive drumming punk-tuating riffs and words, chunky wandering bass lines pummelled out – the latter being a key ingredient of a good punk rock tune.

The self released debut single I’m Alive sold 10,000 copies and was re-released once they’d signed to a United Artists (also home to Buzzcocks, Stranglers and previously Hawkwind and Laurel & Hardy). What an introduction to the band! It is frenetic with stops and starts and a guitar solo that takes off like a rocket. Like the best songs of 1977, along with B side Quite Disappointing, it denounces the boredom and constraints of 9 to 5 normality.

To this day, follow up single Nasty Nasty is still one of my go to singles to get in the mood for a night out. It crashes in, sneers and threatens with its mob chorus then crashes out again. The high octane B side No Pity (a clear precursor of hardcore IMO) made this a classic punk single.

My Street Stinks is another exemplar of first wave punk. Snotty and abusive sounding, with insight, it rails against the small minded attitudes prevalent in mainstream society at the time. The line “And if you walked on my Street they’re bound to hate you” summed up how most respectable folks felt about punk rockers at the time – a celebratory badge of honour. Long before anti-capitalist Buy Nothing days took off, there is the line “Can’t think for themselves. See all the rubbish they buy. Money can’t change the way they think. Try and ask yourself why”. In my opinion My Street Stinks deserved to be the A side but Emergency was a tad more radio friendly and has gone on to become a staple.

Emergency is rivalled by the Homicide single in the radio friendly stakes and is for many folks the archetypal 999 tune. Despite being more musically accessible and reaching Number 40 in the singles chart, the lyrical content resulted in a ban by the BBC!

In addition to an ability to knock out snotty punk tunes for young yobbos, 999 could write poppy punk songs to rival the less confrontational bands on the punk scene like Generation X or (later) The Members. Most people mellow with age, and as punk waned, it is noticeable that 999’s songs became slightly less obnoxious. There is subtlety at play and a softer sound with some stylistic elements borrowed from reggae sneaking in. Par for the course at the time.

The 43-45 year old early songs still sound really fresh and vibrant so inevitably there is a strong focus on the “glory years” within this collection. However, about a quarter of the songs presented give a flavour of what 999 did since reforming in 1991 after a hiatus for a few years, with Jon Watson replace by Arturo Bassick. It serves as a reminder that before the current nostalgia boom, when no-one cared about punk, they were slogging their guts playing small venues.

Disc 1 really is all the hits, with all the early singles supplemented by tracks like Chicane Destination, Titanic (Over) Reaction and Tulse Hill Night from the first 3 albums 999, Separates and The Biggest Prize in Sport. Disc 2 shines a light on what happened between 1980 and the current day, picking up with more songs from Biggest Prize… and the album Concrete, plus a bunch of 80s singles. Standing out are two sixties covers – Lil’ Red Riding Hood by Sam The Sham And The Pharoahs and Indian Reservation by The Raiders. They make them their own, with Lil’ Red Riding Hood being very tongue in cheek. A similar twangy, country cum-surf-guitar also featured on intervening single Obsessed.

The 80s songs are supplemented with 4 songs from 1993 album You Us It and two tracks each from 1998’s Takeover, 2007’s Death In Soho and 2020’s Bish! Bash! Bosh! For the most part instantly recognisable as 999, there is some variety. 1993’s Crazy Crazy Crazy has a psychobilly sound while the two most recent tracks are alternately a heavily Ramones influenced number (Shoot) and high octane rock and roll based around a traditional 12 bar blues riff (The Pit and the Pentagon). Not a million miles from the bands formative years.

The liner notes, largely based on an interview with Nick Cash, are informative but highly amusing at the same time. The piece covers the bands formation and early years right up to the current era, including their relative success Stateside and the notoriety they managed to achieve.

As always with CD (as opposed to vinyl) collections and reissues, the question remains as to who this 40 strong double CD collection is aimed at. Probably not for the ardent 999 fan probably has everything. For those who are replacing long lost vinyl with CD or younger folks exploring a new band, it covers 1977 right up to 2020 and is probably worth grabbing for the first few singles alone. While disc 1 presents 999 at their best and should satisfy those curious as to why this band’s logo still appears on punk rocker’s t-shirts, jackets and badges, disc 2 demonstrates that they were more just a flash in the pan giving up after a couple of years – like so many of the bands of that first wave.

Long may the proliferation of 999 t shirts and patches continue.