Home Music 808 Great Massey on his festival highs and lows 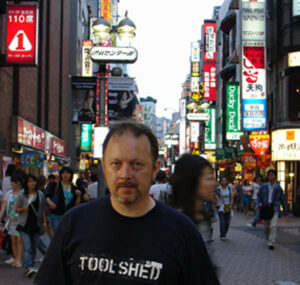 Been up to any remixing that’s particularly excited you or introduced you to artists you might want to big up on Louder Than War, Graham?

The remixing game has changed a lot, mostly it’s now people doing each other favours. Gone are the days when you could make a tidy living at it, at least it seems that way to me.
One of the recent favours/exchanges 808 State were engaged in is one with Bicep, a couple of musician/DJ s from Ireland who have been going for some years but making waves this year.
We will be sharing the Sunday night slot with Bicep at No.6 at the Late Night Pavilion… probably the last spot at the festival.
I got to jam with a great Turkish band called Konstrukt at Islington Mill a couple of weeks back, Sam Weaver had booked them whilst they were on tour and he came to me to borrow a particular transistor organ that they needed.
I was invited to play in the second set and I took my bass clarinet. We were having a great conversation despite our real language differences… we must have had the same record collections! There were only about 20 people there, but often that’s where the magic lives.

How did your latest sessions with Gerald Simpson go, and where can we see or hear the results?

We have done a number of gigs under the name of REBUILD, a couple in recent months, one at Sheffield Documentary Festival and one at the BFI on the Southbank, in support of 808 The Movie [see below].
We also did Glastonbury in 2014. The set we do is 100% improvised using old Roland table top equipment including the 808 drum machine and more recently introducing the new Roland AIRA equipment.
In fact, I can see us using that stuff exclusively soon. Every set we’ve done has been quite different, and it’s a lot of fun. You can’t see or hear the results, is the simple answer, why does everyone assume that everything is available?
I really hate badly recorded You Tube footage as if it’s some record of something, it’s actually a pale imitation of the true experience. If we made a record it would be a different process, one which might happen if we find the right people to work with and manage to co-ordinate our timetables.
808 The Movie is being shown at No.6, it’s a doc about the TR808 Drum Machine and is produced by Arthur Baker. All kinds of people are in there: Beastie Boys, Public Enemy, Manparish, Gerald, Me! It’s been doing the rounds at film festivals and is on general release soon.

Not a lot of people know you’re a Sinatra buff… tell us more?

You are referring to my Sinatra discography guide I did for Chimp magazine a few years back. It’s not just that he s a great song interpreter , it’s the recordings as a whole that I’m a fan of, the arrangements, the engineering.
His records are like little movies. It’s also a sound from my childhood that really resonates in a warm way.
It’s just part of a wider interest in the history of recording and why sound is so transporting. I thought the new BBC Four doc on Sinatra (All Or Nothing At All) covered it pretty well.
There’s also a great book called The Sinatra Sessions that reveals his total involvement in the craft and how, like Bing Crosby, he was funding technology that we all still use in studios today.

How many previous Festival No.6s have you attended?

Just the second one, in 2013. I played the Finders Keepers stage as Massonix, when I had a technical nightmare as I’d set up at dusk and the evening dew got into my mixing desk.
It can be damp in Portmeirion… I’m not a happy camper at the best of times and you wouldn’t want to be around me when I’m doing a festival gig, they are so stressy to me.
No sound checks, 20 minute change-overs, loading antique instruments into open, mud-splattered golf buggies because your vehicle is three miles away. See… I’m stressed already!
This all melts away along with your face as I get to play screaming guitar at high volume… it’s a cycle and it’s always worth it.

It’s 11 years in October since John Peel died suddenly… do you think he would have been at home at No.6?

One wonders how John Peel would fit into the BBC these days. He probably wouldn’t be on Radio One, but on 6 music.
And I guess he would still present Glastonbury and do some stuff for BBC Four TV.
The BBC do take an interest in these mixed arts festivals, they even covered Super Normal Festival and that’s only about 1,500 people.
I have an ongoing role with BBC6 doing a number of specialised shows with Stuart Maconie called Freakier Zone on Saturdays at midnight. It very much follows in the footsteps of Peel’s eclecticism and his championing of the experimental, so his spirit is still alive with us.

Is there anyone else on the bill you are particularly keen to see again or, for that matter, for the first time?

I’m curious to see what T.R.A.S.E. come up with. It’s an album by a guy called Andy P, who people involved in Manchester’s recording studio hey days will know as he was the technical maintenance man for most of them.
When he was at school back in the early 1980s he made his own synths and recorded a bedroom album. Decades later he played it to Votel and Finders Keepers put it out. He has been fixing up the old gear in an attempt to recreate it live.
In general I find at festivals it’s best to play it by ear… there’s a lot more than just bands on at No.6, that’s what I like about it.

Will it feel a bit like Manchester on Sea given the Manchester connections of so many of those performing at this one?

The short answer is yes, and I’m not actually sure why there are so many Manchester acts of a certain vintage. Each festival has its own demographic and this one, you could say, is a bit grown-up. We did Camp Bestival a few weeks ago and that was like 20 primary schools emptied into a field… it was great in the end, once the kids were ‘in bed’!
There are others that are very much for the youth. I’d love 808 State to be on at Parklife or Beatherder for example, but it’s an agent’s game, and you tend to see groups of acts recurring. While that’s great for the acts in question and they get a shot at longevity, you can bet they will have WHP reunions in about five years.
It’s one hard game to put on a bill that works, it’s like a planetary alignment. I’ve seen my son trying to get WHP tickets at 9am on the internet ,veins bulging in his temples…

At Portmeirion it’ll be Toolshed but not as we know it, Graham. So if there’s you, Paddy Steer and Andy Votel, what can the punters expect?

Yes, as well as the 808 State gig on the Sunday night, I’ll be doing a set on the Clough Stage on Saturday at 6pm as part of Finders Keepers 10th anniversary. Yes, we are going under the name of Toolshed, but only because we didn’t come up with another name in time!
Toolshed was a club night we used to do at Night & Day and Band On The Wall in the 1990s. We had a house band where the music was exploratory. We were lucky to have some real talent coming through that band, the best record of which you can still find [at this link]!
We were originally supposed to be putting a band together around visiting European musicians, but it’s not come off as planned and I’ve managed to get something together with some heavy local talent.
Paddy Steer is in both Toolshed and 808 State’s live band. A lot of people will have seen his solo live set at festivals in recent years and that’s amazing. He’s been doing a record a year on his own label, with a new one about to appear. I often play wind instruments on those, but we’ve also done other projects such as The Part Time Heliocentric Cosmo Drama After School Club (a Sun Ra Tribute orchestra) and Homelife (another big band that Paddy ran, with records on the Ninja Tune label).
We even go back as far as the Factory Records days, when we were in Biting Tongues together. We’ve had one rehearsal with this new band so far and all I can say is I’m very excited. We are also going to do Liverpool Psychedelia Fest on the 25th September.

When it comes to 808 State, what’s the ratio of Greatest Hits to those tunes that you’ve simply an itch to play when a festival set is being put together?

We will play the hits because they are the best and most exciting to play ,they have stretchability and room to improvise , there are tunes that haven’t been released and we’ve got so many album tracks to choose from.
I know somewhere in the early publicity for this festival it says we will be playing the album 90 , which is something we did for a couple of other festivals this year, but I think we will just do our most direct and rocking set that has been honed over many years of learning what works for a big crowd at a festival.
It has to work on its own merit, most of the audience are not as long in the tooth as us nor can possibly understand that once we were a pop band on daytime radio when there were only four TV channels.