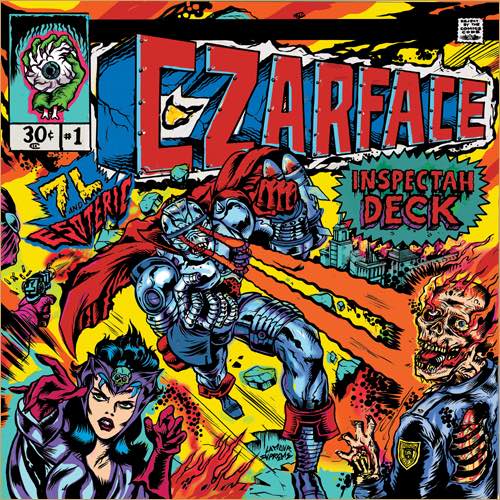 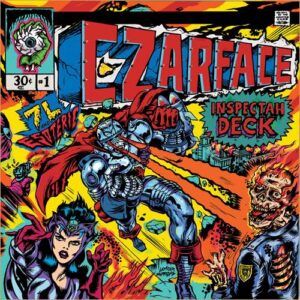 Czarface is a collaborative studio album by American rapper Inspectah Deck and underground hip hop duo 7L & Esoteric. The album was initially released in Feb 2013, so before he begins talking about the album Andy Carrington explains why the belated review.

I could make all the excuses in the world in regards to writing this album review a year and a half after the official release date: I am not a paid critic; I don’t have the money to spend on every CD/LP that I like; I’m not particularly fond of MP3s; and I refuse to download illegally. The truth is, though, I actually bought this 7L & Esoteric/Inspectah Deck joint album over a year ago – I just haven’t gotten around to reviewing it … until now.

I will often make the effort to review music (and indeed film) that has particular relevance to points in my life; and in between mostly writing poems, doing my business on the toilet and smoking the occasional spliff or two, I’ve actually been listening to Czarface quite a bit over the past eighteen months.

Listening, you know, the act of taking heed, paying attention – the thing that many writers will often gloss over in order to get their reviews out on time. Roland Barthes once said, “Listening is the interpretative action taken by the listener in order to understand and potentially make meaning out of the sound waves” – and that’s exactly what I’ve been trying to do.

Aside from the awesome artwork on the cover (and the added bonus of a limited edition action figure that was released with early copies of the album), Czarface is a record that warrants repeat listens for its enjoyability alone. Paying tribute to the golden era, this 7LES/INIS collaboration feels nostalgic with its sample laden production, without sounding contrived or outdated; and its talented emcees seem completely at ease bouncing rhymes off of one another for dramatic effect.

Simply put, Czarface represents the true kind of Hip-Hop that I fell in love with: raw, boom-bap beats; innovative samples and scratching; and most of all: cohesive lyricism. This is not some cheap vanity project put out to encourage the older Hip-Hop generations to part with their money and remember the good old days; this is an expression of love and appreciation towards the culture of Hip-Hop as a whole.

I wanted to take my time to enjoy this record (something I’ve struggled to do since I began writing reviews). Being inspired to head nod vigorously to the track Hazmat Rap in the company of a few close mates will remain a definite highlight for years to come; as will smoking a big bag of green to the vigilant, DJ Premier-produced Let It Off.

Whatever I may have been doing while this record has been spinning over the past months, I cannot deny the exceptionally pleasing crossover of Esoteric and Deck’s different styles flying off the beat, jumping in at any time and finding middle ground with lyrical slaughter. Below is a sample from one of my favourite Esoteric verses on the record:

To get that nineties vibe/

Czarface has plenty of pop culture samples and references such as Batman, Iron Man, X-Men and Spiderman to enhance the listening experience. It’s Raw (with chef/rapper Action Bronson) even features a sample from the Legion Of Doom (which, for anyone like me, who enjoyed late 80s/early 90s wrestling, will find very pleasing indeed).

The most notable sample of all, though, is taken from comedian George Carlin’s 1999 You Are All Diseased on World War 4. The 7L/Spada4 beat on this track wouldn’t sound out of place in a superhero movie; and in between Estoeric and Deck hitting us with clever rhymes, there’s a strong criticism of apathy and mediocrity within the general population:

“You need a little danger in your life/

Take a fucking chance once in awhile will ya?/

What are you gonna do? Play with your prick for another 30 years?/

What are you … gonna read People magazine and eat at Wendy’s til the end of time?/

Czarface, as described by Esoteric, is a vigilante, anti-hero character, and the overall emphasis on punchline rap and dark, boom-bap beats fits the concept perfectly. Various guest spots from the likes of Roc Marciano (Cement 3’s), Oh No (Czar Refaeli) and Mr. Muthafuckin’ Exquire (Poisonous Thoughts) further emphasize the unconventional, heroic qualities of the record as a whole.

It is perhaps Ghostface Killah who shines most of all on Savagely Attack – a real banger of a track – which sees Deck’s fellow Wu-Tang member hilariously attacking his imaginary opponents with brutal imagery and put downs:

“Look out/ attack like a nigga on bath salts/

Eat his face off/ leave his body on asphalt/

Rampant/ run through your town on attack mode/

The addition of Cappadonna and Vinnie Paz on Shoguns doesn’t work so well – mostly for Paz’s usual I’m-a-hard-man-and-gonna-slap-you-in-the-fucking-face type rhyming. Some people like him, personally, I’ve never really been much of a fan. The stripped down Dead Zone works a lot better, with Eso and Deck cleverly trading bars about surviving a zombie apocalypse, but allowing room for DJ 7L to shine in his own right with some dark production and impressive cuts/scratches.

Czarface by no means represents a ground-breaking mish mash of crossover sounds or pretends to be the leading voice of political consciousness – but I don’t particularly care. It comes across immensely focused with plenty of high replay value – more than justifying the 7L & Esoteric/Inspectah Deck hype that first developed following 1997’s collaborative effort Speaking Real Words.

Unlike Esoteric’s solo album Saving Seamus Ryan (which I reviewed earlier this year), Czarface didn’t take a while for me to settle into – I loved it as soon as I first heard it. But one does not simply listen to Czarface once over to sense its revivalist late 80s/early 90s nature; one has to live by it to truly appreciate its greatness.

7L & Esoteric / Inspectah Deck’s music can be found at their website: esoterichiphop.com.