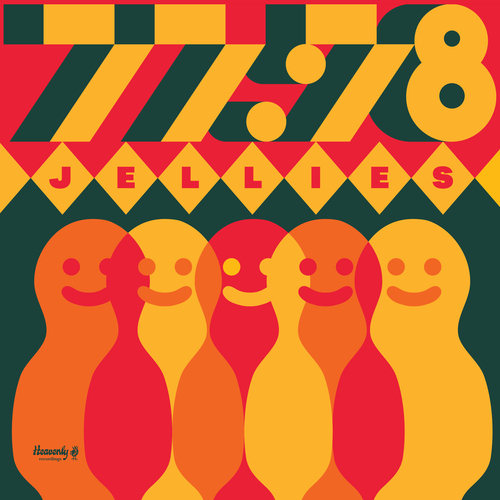 77:78, the new project from Aaron Fletcher & Tim Parkin, card-carrying members of the musical kaleidoscope that is The Bees, have announced details of the release of their debut album, Jellies.

The track listing of the 10-track album, which is released on Heavenly Recordings on Friday 6 July 2018, is as follows:
1. If I’m Anything

The album can be pre-ordered via the following link

The band have also recently unveiled Love Said (Let’s Go), their first release for Heavenly Recordings having recently signed to the label. The track was previously available as a limited edition white label seven which sold out within 48-hours and was the catalyst for Heavenly to sign the band having being blown away by the track after picking up a copy while out record shopping.
The track is accompanied by a fantastic animated video by Sam Wisternoff. Talking about the video, Aaron from the band said:  “Ever since we first saw John Slade’s designs for parties at The Social we wanted him to be involved with 77:78. His artwork makes you think ‘why’ and wtf!? It’s hugely vibrant and it hits a certain silly nail on the head every time. He got what we were after with the band and he didn’t fail once to deliver the goods. Originally at the beginning of the brief we gave him, he made a handful of magical giffs that had us all mesmerised. We were then lucky (again) to stumble over Sam Wisternoff who grabbed all the elements and designs John had created and brushed us a solid graphical vid together for Love Said ( Let’s Go)! There’s teasers to the main artwork included, peace love be silly get the jellies in.”

Set to pick up where the Bees left off, the album was recorded at Studio Humbug on the Isle of Wight and musically picks it way from sublime west coast harmonies that recall the frayed beauty of the Beach Boys Smiley Smile , to the ramshackle dub of King Tubby via the playfulness of early Syd Barret.

“Some musicians and bands definitely have their sound and stick to it, which is fair enough, but that’s just not us. Whenever we’re in the studio we’re constantly inspired to go down different musical paths, which I suppose is why the record we’ve made sounds so diverse. “

Crucially though, the outcome is something that is 100% Fletcher and Parkin’s. From the soft-focus, melodic love bomb of opener If I’m Anything To You, Jellies welcomes you into its own singular universe. There’s the sundazed, Balearic shimmy of Love Said (Let’s Go) emptying the sand out of its dancing shoes before dipping into woozy underwater exotica of Pour It Out. Look up and you can catch the gorgeous chorus that floats above Papers Joe Meek in deep space blip and ping, and then lose yourself in the loose-limbed shuffle of Copper Nail that was recorded – as was much of the record – in an old water tank once belonging to Queen Victoria.

Flip Jellies over and you’ve got even more grin-inducing gems and tiny details to delight in. The sparkling keyboards that glisten through E.S.T.W.D’s blissed out fantasia, the mariachi horns seeing out Chilli’s Tex Mex conga line, the skanking gonzo rave up that morphs into a dazzling technicolour sunset on album closer The Wagon… we could go on, but really you may as well just dive in for yourself right now and enjoy it.
“There’s an absolute joy to this and we really want to capitalise on that. We’re more happy than we’ve have ever been and we want people to see that there’s a lot of fun here,” states Fletcher. “77:78 is a beautiful vehicle and me and Tim want to give it a roll and see what happens.”
Finally, having recently announced their debut London headline show at Omeara, the band have added some further U.K. festival dates across the summer.
The full list of dates is s follows:
26.03.18 – London – Omeara

Can you tell us what was the first music you remember listening to?

I can’t remember the first music I listened to but as a kid I remember there being 3 tapes in rotation in mum and dads car.  Dione Warwick , ABBA and Blondie.  Pretty random selection but I can remember the singalongs to “do you know the way to San Jose” etc…

I started out as a classical trumpet player/piano player and went on to study at Music college in London so I’ve always had some “serious” music going on in my life. In my teens I got quit heavily into Jazz. Miles Davis, John Coltrane, Dizzy Gillespie. I suppose that could be considered serious music. I think the interest in Jazz lead me into a lot of other related genres of music and it helps being able to improvise and adapt to many styles of playing too.

What made you first start playing music?

I suppose we got into playing music because of the schools we went to. We were lucky to have it offered to us from an early age.

There’s been abit of a break from The Bees of late, can you tell us abit of what you’ve been up to??

Yeah it’s been a while….. Myself and Aaron have been busy having kids….not together! …. with our partners/wives. Lol.  Life….bringing up kids….gigging, working…
We’ve been working on this record for a while in between being Dads and all the other stuff that happens when you grow up and have responsibilities…..yawn….
We’ve been squeezing in recording sessions whenever we can and slowly gathering tunes for this Album. It’s taken a while but luckily Rob and Jim Homes, our producer friends, are very patient guys that are in a very similar position and love the music so that helped.

77:78 came about kinda by accident. We went into the studio to record some tunes but not really knowing what for. More out of frustration than anything else. It was only when we started getting interest from the odd label that we thought about starting another band. And then along came Jeff and Heavenly. That was the point that we realised we might be about to enter into the next chapter as it were.

How is the process in terms of writing the songs? Does someone have an idea and then you jam out the songs?? Can you explain further?

The writing process is quit a natural one for us. About half this album was written when me and Aaron went away on a little writing camp to a big barn house in Dorset a while ago and the rest has come about with half finished ideas brought that we’ve brought into the studio and workshopped around a mic or jammed out in the live room.

Yeah we can’t believe the reaction to the 7inch single. Really didn’t expect it to sell out so were super chuffed with that. The single is out to stream or buy now and getting a really nice response from people. It’s nice to hear for old Bees fans online welcoming us back as well.

You’ve now signed to Heavenly Records. How did this come about?

So happy to be signed to Heavenly. Easily the coolest label out there. And with the legend that is Jeff Barrett at the helm were confident we’re good hands.  Jeff and co showed some interest in what we’ve been up to when Aaron was DJing with Jeff and forwarded him a couple of tracks after having a chat with him about our new project. After the response to the 7 inch of Love Said and it selling out they decided to make us an offer we couldn’t refuse. We can’t think of a better label to be on at this point in our musical journey. Really happy :-)

Your about to release your superb debut album. What can you say about the album? What can fans expect to hear?

This album is about Joy and fun and hopefully the listeners can pick up on that. There are some similarities between 77:78 and the Bees but we’ve progressed. We didn’t want to make an obvious move away from what we had done before but add to it or move things forward and freshen things up a wee bit. We’ve always made our music in a natural way. Keeping things fairly simple as far as the recording process goes. We’ve worked very closely with Boe Weaver (Rob and Jim Homes). They have helped produce this album at their studio Humbug in East Cowes on the island. Just working with different producers and musicians has meant we’ve explored new sounds and techniques naturally without it sounding forced.
There’s Soul , there’s Dub , there’s folk, post punk, again. Like before we take our influences from all over and hopefully create something with clear and obvious influences but fresh as fuck.

Are you going out on tour?

No tours booked as yet. After our London show at OMEARA we are spending the summer playing at a few festivals around the country. I’m sure we will be touring a bit later In the year when we’ve got some music out there and we’ve created more of a buzz….oops.

Wherever 77:78 will take us. No real expectations or thoughts on where or what to expect. It’s just great to be out there again, making music making people smile and dance around like lunatics to our tunes. We had an amazing response from the crowd at our first gig at the Heavenly weekender at Hebden Bridge. We very quickly realised how much we had missed hearing that response and feeling the energy of the crowd whilst playing our tunes. It’s great to be back.

What’s on your turntable at the moment??

Recently I’ve been listening to a few of other bands on Heavenly. Trying to keep up :-/
I really like The Orielles, King Gizzard and the Lizard Wizard and the Mark Lanegan Band.
I recently rediscovered the Door Live at Isle of Wight festival. It was a charity shop discovery from last year. Can’t stop listening to it at the moment. What a presence Jim Morrison was. Great musicians as well.
I’ve also been listening to lots of 70s Freddie Hubbard. He’s a trumpet hero of mine. Red Clay is awesome.