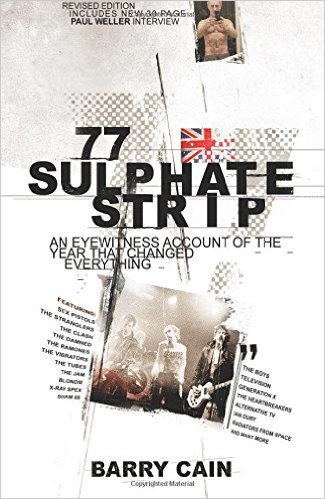 The classic account of Punk’s definitive year by Barry Cain has been updated and reissued and also features recent interviews with some of the main protagonists such as Rat Scabies and Hugh Cornwell. It also contains a new 30-page interview with Paul Weller (which is appropriate as the book was the best seller at The Jam exhibition in Somerset House). 57 Varieties of Talk Soup picks up where 77 Sulphate Strip leaves off and takes us through the late ‘70’s and early ‘80’s scene featuring a wealth of exclusive, never before published interviews with the likes of Bruce Springsteen, The Beach Boys, The Damned, The Clash and many more.

77 Sulphate Strip is written with the unique perspective of the insider, which is what Cain was. As journalist from the Record Mirror, he was accepted by the main bands of the time due to his comparative youth and support for what they were doing. Both books are also written in a breathless and, at times, hilarious style as Cain recounts interviews and stories alongside a wealth of anecdotes. Oh, and the writing is peerless.

The account of Punk begins with an interview with Johnny Rotten, “his vitriol is meticulous but strangely melodious”, the value of which really becomes clear when you realise that the day after was the infamous Grundy interview and life for Rotten, and Punk, would never be the same again.

This book therefore is a hugely valuable document of a period that, despite the fervent wishes of many, can never happen again – the world is simply too different. As a Damned fan I am inexorably drawn to the primary accounts of their early days. He writes that “Damned Damned Damned lifts Punk out of the dole queue and gives it a position in the logical progression of rock” while Music For Pleasure, often maligned and the only album to be completely ignored at the recent 40th anniversary gig, is praised as well thought out and not a rerun of the first album. Having gained the approval of The Damned, Cain is flown over to New York for the “taking of CBGB’s”, an eye-watering account of the 4 nights of the first British punk band to play in the US. Another treat is the report of The Damned Roundhouse gig, Captain’s birthday and 12 hours after stepping off the plane home from New York, performed in front of a hand painted banner that proclaimed “tax exiles return”. Pure gold dust!

The Strangler also feature prominently and Cain’s description of Hugh Cornwell, “he’s the street corner spiv with the suitcase, whispering in your ear “I’ve got something here that might interest you”, namely Peaches” is enough to make anyone who has dabbled in music writing green with envy. The story of the Amsterdam gigs, and Hell’s Angels participation is a chilling insight into the reckless early days of The Stranglers.

If you want some on the SPOTS reality, how about an eye witness report of a secret Sex Pistols gig in Wolverhampton in August 1977? Banned from most places and resigned to facing protests when they did, the Pistols were embarking on the SPOTS (Sex Pistols on tour secretly) tour, or may have been as they seemed uncertain. However, amid the pogoing throng and brawls with bouncers one thing shines through, Rotten announces “it’s the best show I’ve ever seen” and Cain’s verdict leave you in no doubt that the late era Sex Pistols were still a blistering live force.

The events of 1977 are set out in chronological order and the main players, Ramones, Buzzcocks, Sham, XTC, Drones etc are all covered. There are a number of books which can offer you written accounts of this period but few that can bring vividly to life the energy and, at times, danger, of the height of the Punk scene. If you are interested in the Punk era and you don’t own this book yet, you should not hesitate to purchase it as, along with the companion 57 Varieties of Talk Soup – sort of a ‘what punks did next’, it is an essential account of arguably the greatest period in British musical history.