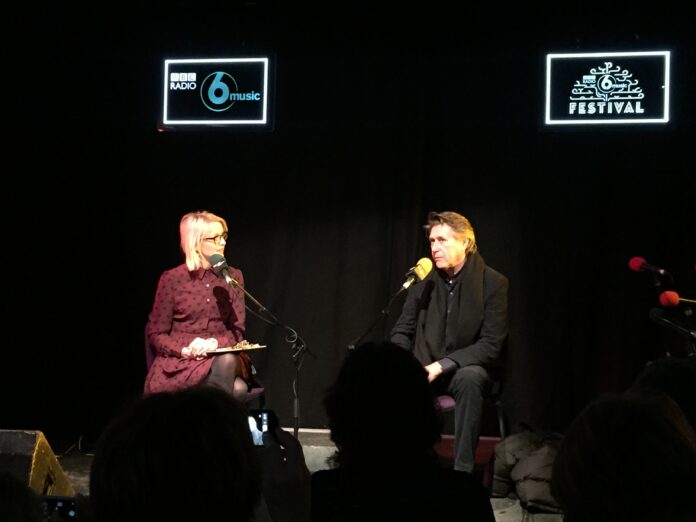 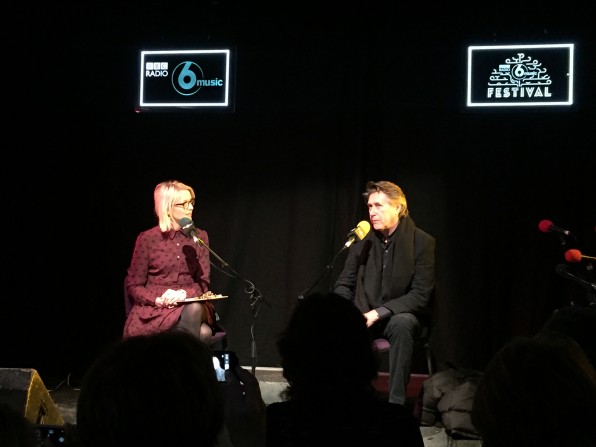 This year’s 6 Music Festival takes on its ‘By Day’ form with a phenomenal lineup of up and coming talent – and one elder statesmen thrown in for good measure.

The by day events to me seem to be more in line with the typical BBC events, take the BBC at the Edinburgh Festival for instance. Tickets applied for through a ballot system and its luck of the draw, as is the case with the two by day events this weekend.

So whilst the headline grabbing acts are playing the bigger venues, it would appear that the true talent is bubbling under the surface in the smaller venues that have been commandeered by the BBC. However, there is one special event on this morning that has got me out of bed at a ludicrous time on a Saturday morning.

That is the arrival of Roxy Music front man Bryan Ferry. Taking to the stage just after 11 he sits down with Lauren Laverne, providing half an hour of spellbinding tales about the city, its club scene as he was growing up, where The Gas Board used to play.

It’s with complete awe that I watch on as he divulges tales of Roxy Music’s inspirations, how he favoured eclecticism and how they were always in search of something different. He goes on to talk about how he was privileged to be around in the 70s as it was a pioneering time, especially surrounding himself with some phenomenal artists in the likes of Brian Eno and Andy Mackay allowing Roxy Music to always push things forward.

From this though we emerge back into the light for a very short while before heading into the Cluny’s main venue, as the unbelievable Slaves are about to take to the stage. Having seen these guys before I went in fully knowing what to expect but it isn’t even midday and Slaves were on top form.

The lazy comparison would be to compare this powerhouse duo to Royal Blood, but they’re so much more than that there is ferocity, charisma and likeability which Royal Blood do not possess. They pound through a set of insanely catchy hook-laden tunes, including the phenomenal Where’s Your Car Debbie. With only 25 minutes to leave a lasting impression Slaves win over hearts and minds in this packed venue, a real spectacle and they’ve still to release their debut album.

Opting to remain close to the Cluny I’m lucky enough to catch The Wave Pictures, who played just up the road less than two weeks ago. Now they’re back with their new album Great Big Flamingo Burning Moon firmly in the public domain, today fortunately sees them thrilling us with a plethora of tracks from it.

Opening with the title track it’s a jaunty affair which cannot fail to get this huge crowd singing along, as they jam in the hits new single I Could Hear the Telephone (3 Floors Above Me). It’s an absolute master class in indie pop and once again David Tattersall’s guitar playing is out of this world, he’s an absolute genius.

The highlight for me though is Pea Green Coat as it is by far the catchiest track in this short set; whilst the lyrics are simple they worm their way so tightly into your head and stay there. Unfortunately for me I still haven’t gotten them out from the last time I saw them, so I was perhaps a little over enthusiastic to hear it again.

The final band that I got to see today due to other commitments though is a band I’ve waited a long time to see, Joanna Gruesome have proved rather difficult to see live. However, today they’re here to play tracks from upcoming LP Peanut Butter and a couple of old ones.

They’re everything I want them to be live shambolic, over-excited yet at time insanely tight. As Alanna stuns me with her power, stomping about the stage the noise they create is almost deafening at times yet superb. The new tracks sound fresh, interesting and beyond any reasonable doubt Peanut Butter is going to be a massive record this year.

From one of music’s elder statesman to three of the best bands around today’s been a complete success, there is such a buzz around today though it’s a reminder that all is alive and well in Newcastle’s music scene.