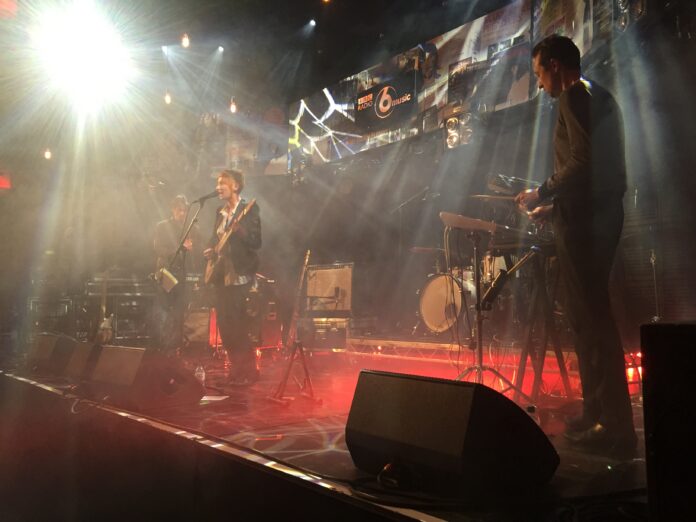 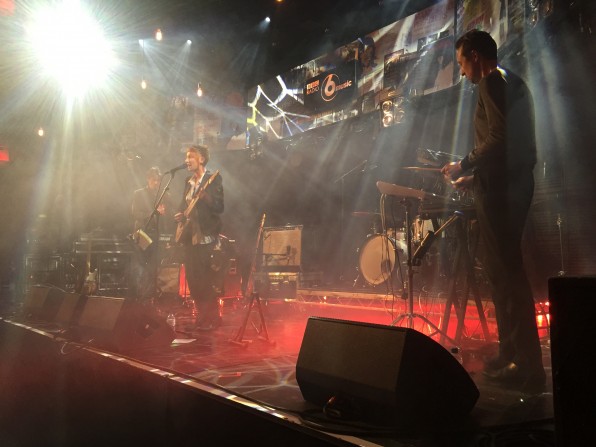 As 6 Music Festival reaches its close on Tyneside we’re on hand to get one last glimpse at this phenomenal spectacle, that has set Tyneside alight over the last three days.

Day three begins once again with a mammoth by day session including a variety of eclectic sessions, arriving in time to hear Tim Burgess in conversation with Cerys Matthews. They chat about country music and working with the brilliant Kurt Wagner of Lambchop, before premiering a track by Laura Cantrell that is a reply to Emily from the new Charlatans album titled Emmanuelle.

The day gets evermore exciting as Elbow’s Guy Garvey and King Creosote step on to the stage next to talk about the art of songwriting with Tom Robinson. They discuss the greats including Bowie, Simon and Garfunkel, Joni Mitchell before performing a beautiful cover of Always on My Mind.

Guy’s anecdotes bring a brilliant element of humour to this short discussion, particularly Howe Gelb and the “stolen” lyric that features in Elbow’s One Day Like This. The day keeps moving through as we cross to a much larger stage where local band Hyde & Beast are waiting to get going, opening up their set with Train To Nowhere.

They do their best to get the crowd moving in what feels like sub zero temperatures, after all it is essentially a warehouse without heating. My distinct lack of outerwear wore very thin rather quickly, yet Hyde & Beast continue to warm me through with Americana infused folk.

A Dark Mistake is a definite favourite from today’s short set, their impressive second album has really seen them hone their sound perfectly and they really go some way to brighten up this drab day. However, the weather is the only thing that is drab about today as the music continues with the hotly tipped Woman’s Hour, who aren’t the most apt band when you’re this cold.

Yet it is the perfect setting for them, their dark cinematic indie electronica fills this warehouse as frontwoman Fiona serenades us with her beautiful tones. It’s a beautiful set which passes by all too quickly Her Ghost is beautiful and haunting at the same time, it’s a stunning set from a band who are sure to be huge in the coming months.

They cap it off with a brilliant cover of Dancing in The Dark done in their own style, what a perfect way to conclude this beautiful display. Moving back to the smaller stage there is a talk on Northern Soul, a subject, which I will openly admit, isn’t something that I’ve ever had a huge interest in.

However, I found this half an hour brilliantly insightful into a world I’d never really given much thought to previously and the fact its roots were firmly formed in my hometown makes me feel slightly ashamed of myself. Up next was something at the other end of the spectrum in the form of the astounding genius of Beardyman.

Despite various technical difficulties due to the sub zero temperatures, he is in unbelievable form. Over the whole weekend this has to be up there with the best sets. The fact he is able to develop a near coherent album in an hour, in this case just less than an hour is nothing short of miraculous. His incredible talents make most other artists pale in comparison.

It’s not only his talents as a beatboxer or a musician though; his whit and comic sensibility shine through. It’s plain to see why he has taken this show to the Edinburgh Fringe. It’s the perfect act every time something different happens, it leaves me completely blown away and the hardest thing to believe is I’m not even half way through the day.

I make my exit and head towards this evening’s by night venue, the entrance to the venue is well managed and despite the number of people there are no queues. Upon entering The Sage it’s been completely transformed into a foliage filled wonderland, they’ve ripped all of the seats out of the huge hall one normally home to the likes of the BBC Philharmonic and The Northern Sinfonia not BBC 6 Music.

We gather in anticipation as the first band of the evening are announced, the brilliant, the inimitable and the wonderful British Sea Power. With only half an hour they waste no time in laying waste to the crowd of baying fans, chants of “EASY EASY EASY” precede No Lucifer. It’s a track that never fails to get any crowd going, as is Waving Flags, it’s the perfect opening set.

However, it’d not be a British Sea Power set without Ursine Ultra who is let loose in Hall One to end the set and joins in gleefully with proceedings, all adding to the brilliant atmosphere. Moving swiftly on what promised to be one of the most exciting spectacles of the evening, I’m biased about this one I’ve loved Wire for a long time so this would always be exciting for me.

Tonight though everything has been turned up to beyond eleven, it’s almost deafening they premiere tracks from their new album. All of which seem to have taken a really ferocious approach, where perhaps the last two albums haven’t been as in your face. The band themselves have described the new material as having Motorik beats and that is definitely evident.

They sound huge and it fills The Sage this evening helped only by the fact that they’re playing on the massive Concourse stage. It’s an incredible set and yet another highlight to add to the list, this evening already feels very special and when you think it can’t get much better it does. This time in the form of Lonelady someone who I’ve never followed but have heard the odd thing, tonight though she’s on fire.

It’s easy to draw a comparison to La Roux, with her appearance and even more so her music, yet it seems to go beyond that. She doesn’t fail to get everyone up and dancing this evening, her perfectly crafted punk funk is exquisite. With a new album due imminently on Warp surely its time for Lonelady to break through and infect all of our subconscious’s with her funky grooves, just as latest single Groove it Out does tonight.

As time creeps on the bands keep coming thick and fast as decisions become more difficult, opting for Public Service Broadcasting though will always be an easy choice. On the eve of their second album release, J. Willgoose Esq. and Wrigglesworth joined by a few friends take to the stage to provide us with what can only be described as a phenomenal set.

New tracks from The Race For Space sound fuller and funkier Gagarin is brilliant, with its huge brass section, they’ve just made everything so much bigger and more exciting. It was going to be a tough task to match Inform-Educate-Entertain yet they’ve done it with relative ease; a personal favourite of their new stuff is Go! which sounds utterly brilliant.

However, they do indulge is with some of their older stuff, I doubt they’d be allowed out alive if they didn’t play Spitfire and Everest. Both of which have become classic tracks and rightly so, they’re so different to a lot of the mediocre nonsense out there right now. Public Service Broadcasting has found their niche and they’re playing up to it perfectly.

It’s with a heavy heart that I come to make one final decision on which headliner to see this evening, despite all three being excellent and having their individual merits it has to go to the return of The Maccabees. Barr supporting a number of high profile bands, they’ve been in the wilderness for some three years now. For me they were a band that I once held dear to my heart yet I seemed to have lost touch with them.

Having supported the band since their early singles even organising for them to launch their album in a record shop I worked in at the time, which saw some of the most raucous scenes I’d ever experienced in a record shop. Tonight gave me that chance to reconnect and wow has it been worth the wait, playing tracks from their upcoming album all of which are much fuller than their previous offering.

There’s an intensity that was previously lacking, it’s like the band have their fight back, their set tonight is frantic yet controlled. They even bring out the really old tunes in the form of the poetic Latchmere, Precious Time and Love You Better; it’s a set for the heads and the hearts. It’s The Maccabees back to their best and it has only stoked the fire for what I hope is a return to their early form with this new record.

It tops off what has been an unbelievable surreal weekend, having time now to reflect it was phenomenal. Yet there is one underlying theme throughout the weekend and its not the acts, nor the BBC presence but the real sense of community that emanated from every event this weekend. The North East Community collectively got behind this event and provided some of the best crowds and the best hospitality that any festival could have asked for.

Yes interstellar By Night lineups and a phenomenal program of events throughout the days helped it. Overall though it hit home to me how much of a special place the North East is, how it can compete with any of the bigger cities with more venues and perhaps more variety but what we have in the North East is truly special. Many others have commented on this but it feels so true just from talking to a variety of people who manage the venues, who attended the events there is a collective sense of pride in the North East.