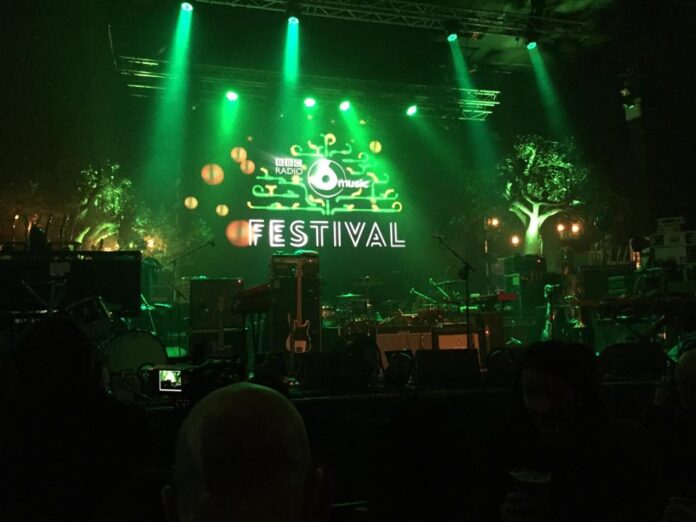 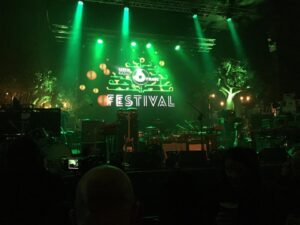 An eclectic lineup of epic proportions, filled with emotion and excitement. The return of Sleater Kinney is an obvious highlight this evening as they tear through Newcastle like a hurricane.

This evening sees the opening of the second 6 Music festival, what a way to begin or so we hoped at least. As The War On Drugs take to the stage first their amazing American rock is condensed into a very brief four-song set and that said Adam Granduciel and his band are on top form this evening regardless of the short set.

With ’Under The Pressure’ getting its full 10-minute airing to open the set, their languid style is a perfect way to open any festival. ’Red Eyes’ is a highlight though it sounds huge with its various layers of instrumentation to create this wonderful soundscape.

As The War On Drugs exit the stage the crowd are now rammed in to almost bursting point. The next band are one to savour, this being their first show in the UK for a decade.

A band that personally mean an awful lot to me, from being a sullen, miserable angst filled teenager living in a backwater town. Hearing Sleater Kinney for the first time was some kind of awakening for me ever since I heard ’One Beat’ it grabbed me with its intensity and excitement. To my disappointment I never got to see them live, so to be present in this room this evening feels incredibly special.

Taking to the stage with added member Katie Harkin from Leeds band Sky Larkin, they kick straight off with two tracks from their comeback album No Cities To Love. Instantaneously the atmosphere throughout the room changes, there’s an excitement and intensity to their set, as Corin Tucker remains almost stationary behind her mic stand. Carrie Brownstein high kicks and twirls around the stage as she flings her guitar in every direction, like a whirling dervish.

’Fangless’ is an early favourite, arguably one of my favourite tracks off the new album showcasing Tucker’s vocals at their best, again the intensity of the track shines through. However, the older tracks are still so powerful as ’One Beat’ sends chills down my spine, Janet Weiss’s drums on the track are utterly brilliant.

What is ever present in this set though is the beguiling musicianship from all of the band members they’re all incredible, it’s none more evident than on ’Entertain’. Overall it is an absolute joy to witness this, it leaves us on a complete high in the lead up to Interpol, as they take to the stage, the intensity drops somewhat.

Whilst it is an accomplished set Paul Banks and company seem a little lacklustre compared to the hurricane which has just torn through the building, I have nothing against Interpol but this evening everything just seemed to be a little flat. Even ’Slow Hands’ didn’t carry its usual intensity, which is a shame as I had been looking forward to Interpol.

So it fell to the awesome Mogwai to take the headline set this evening, on a night where any of the bands would be seen fit to headline this venue Mogwai have the pleasure, they ratchet the volume right up. As they open with ’Heard About You Last Night’ and ’I’m Jim Morrison, I’m Dead’ it felt like this would be one of Mogwai’s slower sets, which is never a bad thing but the arrival of ’Rano Pano’ pushed the intensity level up a notch.

As the band hit their stride they break into the otherworldly ’Mogwai Fear Satan’, which no matter how many times I see them live still nearly gives me a heart attack. This track alone is sheer genius; it is also why they’re celebrating their twentieth anniversary this year.

They’ve honed their craft and are understandably the kings of post rock and tonight is just a demonstration of why they are so, even with newer tracks ’How To Be a Werewolf’ and the brilliant ’Teenage Exorcist’ breaking the mould and having some vocals in them. It shows a slight shift in their sound but it’s a welcome one.

Despite the near death experience, Mogwai prove that they’re a phenomenal band as they round off an eclectic evening, to begin the festival. It leaves us on a high filled with excitement, a night which we never believed we would see in Newcastle.