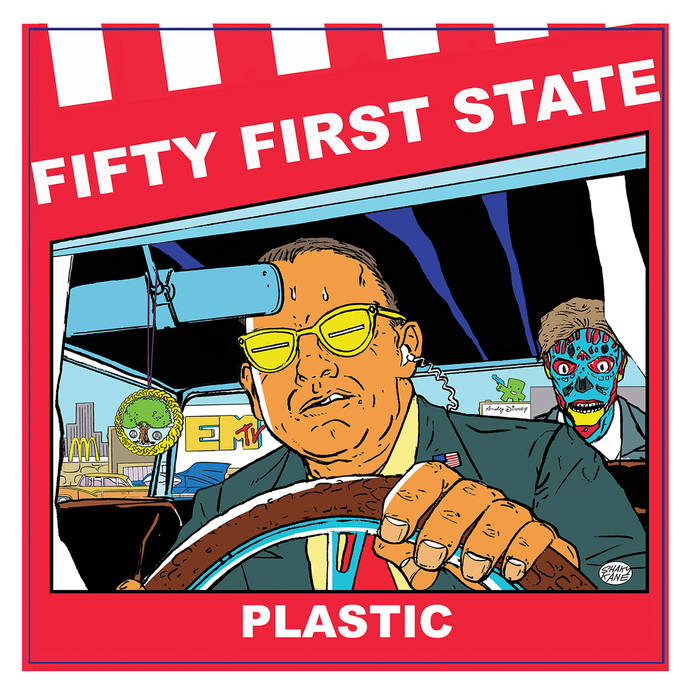 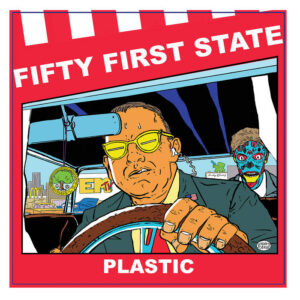 Grow Your Own records presents Exeter’s 51st State who unleash 6 tracks of a hippy-punk mashup of anarcho punk, ska, dub, thrash and space rock on a range of formats.  Nathan Brown finds it difficult to pin them down but gives the record a big thumbs up.

Over the past 5 years or so I’ve seen this pair as far South as Southampton, as far North as Glasgow, as far West as Bath and they have been a lot further, popping up at various festivals. You certainly can’t fault the effort they have put into getting around the country. However, I’m still at a loss to describe 51st State. Anarcho-hippy-punk-dub-thrash-space-freakout may sound like too much of a contradiction but contradiction and about-turns is part of what you get from this duo. Hopping from one style to another, you’d be forgiven for thinking this was a compilation album. This makes it difficult to pin down exactly what 51st State’s style is. And I think that is the point. They start with a riff, add some solid frantic drumbeats and then build the song around that. This is drum and bass, Jim, but not as we know it. The beauty of being a 2 piece is the ability to change in the flicker of an eye to a different style, tempo or riff – once you get to 3 people it becomes much more complicated. Then take into account that these lads have been playing together for so long that I’m sure they have developed the “golden thread” meaning they can virtually read each other’s minds. I’m not convinced they practice the changes religiously and get them in the same place every time, it’s sound too organic for that. Maybe I’m being naive but the organised chaos is a part of 51st State’s charm.  This is also what has undoubtedly won over many on the festival circuit.

Every now and then they go effects mad, veering into full on hippy space rock and then they may drop into a ska style number, a thrash song then something with a dub reggae influence. There is definitely something about 51st State that reminds me of old favourites 2000 DS in the way they work seamlessly from almost bluesy festival rockouts to bleeeurgh thrash. DS were another band who blurred the lines between punk and hippy. This is most obvious on side 2 with Beasts & Slaves and the follow up thrasher Carz. Perhaps it’s the roving, distorted bass, played as if it was a guitar, just like Lemmy did.

Amazingly I don’t miss the guitar, which stands as testament to the talent or song writing ability of 51st State or just a damned good recording. Vocals are sometimes reminiscent of 80s tuneful punk singing from the likes of Mark Wilson of The Mob or Nox Mortis and at other times there is angrier stuff that is more in the vein of Pete Wright singing for Crass. At this point they bear similarities to anarcho 2 piece Burnt Cross (who do have a guitar).

51st State present as eco-warriors, anarchists, young lover of freedom, cynical users of technology.  They are also creative and playful. I love the snippet of robot speak “You are in Credit. You are in Debt. Credit Debt Credit Debt… You are in a coffin.” And the chant in the middle of Plastic President speaks truth to the contradictions of current technology culture – what sets us free also enslaves us: “I’ve got a computer at the end of my arm. It makes me anxious and it makes me calm (…it’s selfie time with the all-seeing eye)”

What I guess you might call the title track, Planet of Plastic/Plastic Medicine, is a wonderful apocryphal and apocalyptic tale of the not too distant future, when there are “no humans on the planet of plastic”. I really hope that when they call plastic “The alien substance from Area 52” it is metaphor/good natured dark humour and that they aren’t getting drawn into a world of chemtrail conspiracies!

The packaging features some nice graphic novel quality cover art from Shaky Kane that draws on the 80s horror/sci-fi film “They Live“. and has something of Shepard Fairey about it. The 10 inch vinyl comes in transparent khaki – giving it the look of the sort of vomit you’d project after a night on the scrumpy followed by chips and curry sauce.

You can pick up the vinyl, CD or download from Grow Your Own’s bandcamp page.
51st State can be found on Facebook but you’re better off catching them in the flesh.