Home Blogs 5 new underclass drugs from around the world…

5 new underclass drugs from around the world…

In the past Argentina has primarily been a country that has transited drugs. After the economic collapse of 2001 that saw violent riots nationwide and poverty at an all time high it has slowly developed into a producer of cocaine, and it’s from the production of cocaine itself that ‘Paco’ derives. This super low budget (10p a hit) and highly addictive drug’s base is made from Andean coca leaf paste left over from the actual manufacturing of cocaine. The paste is then mixed with crushed glass and kerosene to produce Paco, so cheap that it’s become commonly used amongst the children who live in the slums at a dollar a hit and so dangerous that it’s said to cause brain damage within months of regular use. 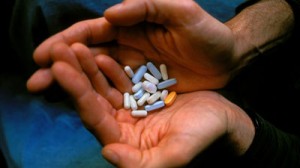 One of the most disturbing of these new underclass street drugs is ‘Wunga. Made up of rat poison, weed and anti-retroviral drugs including medication used by HIV sufferers. The demand for the med’s to make the drug is resulting in HIV patients being robbed right outside the Med centres they attend to receive their Government funded antiretroviral drugs which has resulted in some of the locals taking to the streets in protest.

Rolled and smoked like a spliff Wunga is said to be highly addictive and has already claimed scores of deaths in Durban where the problem is at its worst. 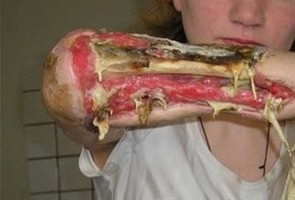 A homemade cocktail of petrol, solvents, phosphorus and most importantly codeine make up the properties of the DIY budget opiate based ‘Crocodile’. It’s devastating effects leave skin rotting at an alarming rate. A users life span is, on average, 3years. Once the drug enters the user’s bloodstream it immediately starts killing the white blood cells in the flesh around it, leaving the user’s skin greenish and scaly like a Crocodile’s, before it completely rots away.

The drug problem initially stemmed from the state making codeine available over the counter without prescription which enabled heroin users to cook up a cheaper alternative. Bigger problems lay ahead as the Ukraine Government plan to take it off the market this year which is expected to leave the many thousands of users of Krokodil with no help, support or rehabilitation leaving the country in fear of a major on-coming heroin epidemic to take over the supply and demand that this cheap and accessible opiate has created amongst the people of Ukraine.

This is a recreational drug popular in the hip-hop community and particularly in the southern U.S. states. The main ingredient in Purple Drank is prescription-strength cough syrup that contains the drugs codeine and promethazine. The cough syrup is mixed into a soft drink like 7-Up, or possibly with fruit juices or even wine.

Also known as ‘lean’ ‘purple jelly’ and ‘syrup’ the drink’s been heavily associated with US rap artists Lil Wyane, Paul Wall and 36 Mafia who’s track “Rainbow Colors” celebrates their favourite ‘players’ slurp as well as it being credited in influencing the new ‘Chop & Screw’ rap style with the slowing down of beats and bars which complements the drug’s effects.

Though sounding quite innocent, if not interesting, Purple Drank is still an opiate and is said to have resulted in some cases in overdoses as well as having the capability to lead to coma’s, seizures and loss of consciousness. 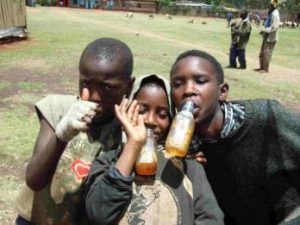 Probably the most fucked-up way of getting high, ever, is Jenkem. Solid human waste and urine are mixed together to produce a gas which is then inhaled. Originated in Zambia by the children of Lusaka who discovered the high by hanging around local sewers, it’s now reportedly being used in US high schools.

The waste is placed in a jar and covered by a balloon which collects the fumes. Inhaling the gas is said to have a euphoric high similar to ingesting cocaine and causes hallucinations almost immediately.