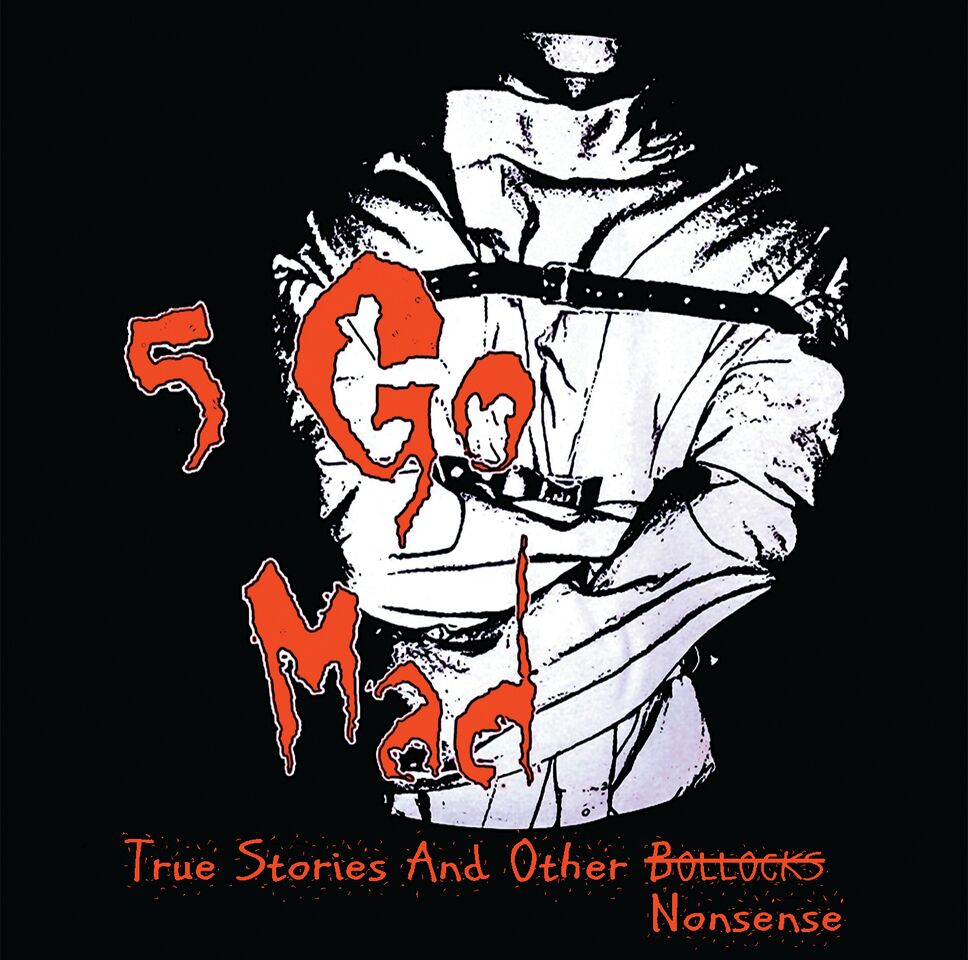 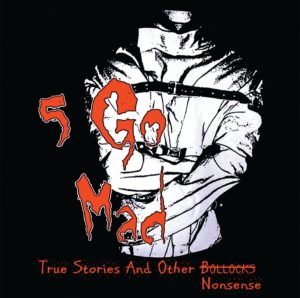 5 Go Mad – True Stories and Other Nonsense (Self released)

Second studio album from (a new line-up of) 5 Go Mad, but the songs remain the same: Rude, lewd, Punk and Proud.  Russ Bestley reviews for LTW.

Since they played their debut set at Gosport Punkfest on 15th August 2015, Portsmouth area punks 5 Go Mad have become a staple fixture on the live circuit around the UK. They regularly play in the midlands and the north, including two storming visits to Rebellion Festival in Blackpool in 2017 and 2018, leading the charge among their (envious) South Coast peers. They clearly take their inspiration from the early Anti Nowhere League (when the ANWL were funnier and weren’t trying to act hard), Peter & the Test Tube Babies, the Toy Dolls, Chaotic Dischord and a whole host of post-UK82 groups who embraced humour and a sense of fun at their gigs, rather than following the po-faced ‘hardcore’ crowd endlessly trying to find something that rhymes with ‘nuclear holocaust’ (“Worcester sauce” perhaps?).

More recently, Dirtbox Disco have seized the punk public’s imagination with their unapologetic approach to combining punk and comedy, gaining a large following across the North West. It’s no surprise that 5 Go Mad were invited to take part in a 2018 UK tour by Dirtbox spin-off group Kid Klumsy, and they have continued to build a strong live reputation as a kind of Southern Dirtbox (pun intended).

5 Go Mad released their debut album, Lashings and Lashings of Five Go Mad!, on their own label in the Summer of 2016, and followed it with a Live & Loud style live album, Live at the Rifle Club, a year later. Lashings and Lashings showed promise, though it was clear that the band were fairly new to working together (or, in some cases, playing instruments), while the live recording was an astute demonstration of punk wildlife in its natural habitat – laughs, abuse, interruptions, warts and all. The band have always been best heard in a live setting with a pint or two in hand – the nearest staying-home alternative might be binge watching Carry On movies while reading Viz comic, drinking cider and black through a straw and listening to the first Anti Nowhere League album on repeat, ad infinitum. 5 Go Mad operate in the spirit of earlier punk humour – more bawdy music hall than outright offensiveness: phrases like “He’s a bleedin’ rotter” (Frotter) hark back to a more innocent age, and mimic the great Steve Jones’ first televised reaction to Bill Grundy, while I’ve not heard the male appendage described as a “winkle” (Great Balls On Fire) since the days of Charles Hawtrey and the golden age of Carry On.

Recently the band took a weekend out from their hectic live schedule to retreat to a basement, recording ten tracks including some older live favourites – Syd Mankini, PMQ’s, Friend Of The Stars – along with some new material honed to imperfection through recent live performances. It’s a totally punk DIY effort, with a rough and ready sound to match, but the production is surprisingly effective in capturing the band’s live energy and the comic spirit of their oeuvre (I just had to get that in there, hoping they might use the quote on their publicity).

The album kicks off with PMQ’s, an old live favourite with a particularly catchy chorus: “PMQ, PMQ, Shut Up you have a job to do” berating the childish behaviour of MPs at Question Time every Wednesday (well, every Wednesday when Parliament is in session, a timetable which curiously mirrors the public school calendar – whether that’s to allow MPs to spend time with young Tarquin and Tiffany during their home visits, or simply another reflection of the privileged lives of the born-to-govern from nanny to nursery, through public school and Oxbridge, to the Commons and the Lords I don’t know, though I have my suspicions). It’s an unusual song to start the album, as it is one of a small number of more ‘serious’ topics that 5 Go Mad tackle in their own inimitable way.

Indeed, other more serious tracks included here, such as Madness (about mental health issues), Politician (mirroring PMQ’s disdain for our supposed public representatives) and Demagogue (the same critique maxed up to global leaders), show something of a dual direction as the band progresses and songwriter Andy Matthews gains more confidence in his approach to narrative and observation. The band may be forced to make more of a choice in future, perhaps structuring some of their songs to more carefully foreground some of Matthews’ more pertinent and hard-hitting lyrics, which can at times be obscured behind the group’s usual ramalama shoutalong style – though even then, like the Anti Nowhere League and their other punk comedy heroes, their live audiences will probably still be waiting to hear the ones with the swearing.

By contrast, second track Banjo String laments a tale of a torn frenulum (look that one up), while Frotter calls out a sexual predator who likes to get a bit too close to the opposite sex at gigs, with one of my favourite rhyming couplets of the whole set:

He prowls round the crowd, picks the right spot
Behind a girl moves in to frot
“Oh, I’m very sorry – wasn’t my fault”
Yes, it was mate, that’s sexual assault!

Another older song reworked here, Syd Mankini, tells the true story of a mate of the band turning up at a gig in a green mankini, with another great shouty chorus that is deceptively (and annoyingly) catchy. If Andy Matthews ever quits punk rock he has a natural career waiting, churning out uber-annoying advertising jingles in the Shake ‘n’ Vac mould. Demagogue is a fairly straightforward uptempo punk song, though the backing harmonies lift it into Dickies territory (no mean feat), while Great Balls On Fire (about chemical hair removal) mimics the Toy Dolls Fiery Jack, though involving very different body parts. Friend Of The Stars again mirrors the band’s circle of acquaintances, gently mocking that bloke we all know who claims to have been everywhere first and who knew everyone before they were famous, the legend in his own bedsit. Mind you, these cutting lyrical observations can be a double-edged sword: I’ve seen 5 Go Mad many times over the past three years, and I think I share a concern at the back of my mind with other regulars – what happens when we get featured in their songs? Will we even know it?

Politician wears its heart on its sleeve as a kind of follow-up to PMQ’s, and the album ends with the live favourite Shit Town Rat… once again a catchy chorus draws you in and refuses to let go days later:

Geldof, Geldof, Shit town Rat
Sparkly suited, fucking twat
You’re a wanker, we all agree
We hate you, I guarantee.

The group’s line-up has changed over the years, stabilising more recently around longstanding singer Alan, guitarist Andy and drummer Wozza, with Weeze on bass duties and the helpful addition of Murderers Row guitarist Matt on lead guitar. Their sound has certainly tightened up as a result, and despite its raw origins this album displays some quality instrumentation along with the Muppet Animal drum rolls.

Like the early League’s obsession with the ‘nowheres’ of Tunbridge Wells, many of the songs simply reflect the day-to-day lives of the characters in the band and their immediate friends, family and acquaintances, and they manage to draw out some of the bizarre drama and ridiculousness of our everyday existence. 5 Go Mad have come a long way over the past three years, though they haven’t lost sight of their desire to simply have fun and to drag their live audiences and listeners kicking and screaming into their crazy world of true stories and other nonsense.

Hear and buy from the following digital outlets

Or get a CD from the band via Facebook

All words by Russ Bestley