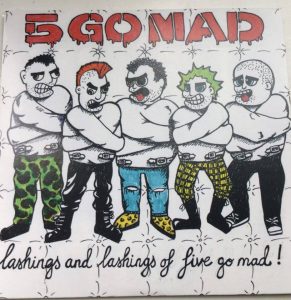 Pissed’n’Proud, Punk’n’Loud, punk-as-fuck and so on, 5 Go Mad are beyond any parody or caricature of punk.  Ged Babey is conflicted.

Just thought I’d paint a picture of the album in words.  A pen portrait of the debut punk rock album made by the Idiots Savants of Pompey Punk. If that’s not offensive to the learning disabled.

From Portsmuff…. Five Go Mad!!!!  There are five of them and they are ‘mental’ so it’s the perfick name for them, evoking as it does the fictional nostalgic world of Enid Blyton and relocating the adventures to the world of badly-behaved provincial punk rock .

Basically. If your punk rock collection includes the complete works of Peter and the Test-Tube Babies, Toy Dolls, the Macc Lads and the Anti-Fucking-Nowhere League then you’ll love 5 Go Mad. They are old-school, if you went to one put on special measures in the UK in 1982.   Hard-drinking, un-PC but anti-fascist, stuck in a rut, punk rockers.

I’ve noted recently that young American bands who are fast and loud and novice musicians mocked by their ‘straight’ peers use the term ‘shitpunk’ to describe themselves as it turns the insult on it’s head.  Well, 5 Go Mad are the Godfathers of Shitpunk!

They are kind of ‘mates of mine’ in that I bump into them at local gigs and they are always friendly and a laugh. Nice geezers who are well aware that ‘old-punks’ are sadly quite-literally a dying breed.  So they want to cram in as much fun as possible between day-jobs and family.

Alan (vocals) is one of a few people who still wears tartan bondage trousers in 2016 and puts on an annual punk-fest called Bash the Bishop in Worthing.

Drummer Wozza is one of natures anarchists and has a habit of baring his arse if anyone points a camera at him.

Guitarist Brian was in a dis-core band in the 80’s called Ad Nauseam who had a fearsome reputation. He’s a larger than life character who could be Arturo Lurkers kid-brother.

Bassist is Jon Lamb, who also plays solo, promotes odd gigs and is just an all-round nice geezer and wearer of white jeans .

Andy on rhythm guitar is a perennially smiling, baldy dude with the weakest bladder in the county (immortalized in a song on the album).

Much as I like them as individuals and a band, there’s one thing we don’t agree on, which can be summed up in four words; The Anti Nowhere League.  The homophobia and lazy everyday sexism of. The out-dated Benny Hill humour therein  and so on.  Its not just the League ; I’m not a fan of Macc Lads, Test-Tube Babies and others –  it’s the Guardian-reading Grammar-Schoolboy “Faux-Feminist” in me I guess.

Five Go Mad do have elements of the same kind of stupidity in some of their songs…  but not the homophobia and without any hatred.  It’s more like the American deliberately-dumb provocation of Angry Samoans or the Queers. That said,  I do have a problem with lyrics that are so Roy Chubby Brown that they belong back in the early 70’s.  It’s cartoonish comedy  maybe but references to ‘dirty slags’ and comparing female genitals to a ‘badly-made kebab’ are not something I applaud.  Even if it is deliberately-placed irony to wind up the PC Brigade?  The whole issue of punk political correctness is covered in one of the songs.  Its called unsurprisingly  Punk Police.  And it’s not really a well-researched, backed up with evidence and facts from the great thinkers of our time, argument.  It goes;  “Fuck Off! Fuck Off! Punk Police…” Oh well.

If I though for one second that Alan Calver, the singer and Andy, the lyricist were wife-beating child-haters I wouldn’t give them the time of day, let alone any coverage, but I’ve met their wives and Alans daughters and they are caring  husbands and Alan is a great dad, often seen with his 2 year old daughter (with ear-protectors) at many a punk gig,

So, why do I, against all my rational better judgement love this album?  Well, its because its genuinely laugh-out-loud in places  (Ginger Beer, Andy’s Bladder and What Shall We Do With..).

‘Ginger Beer’ features the piratey voice-over skills of Brian whose laugh is as infectious as herpes  (Looks like their juvenile humour rubs off!)   ‘Andy’s Bladder’ has some rhymes which Pam Ayres would be proud of, and the closing  ‘What Shall We Do With …’ is the old traditional Drunken Sailor tune re-written to include and insult each band member in turn.

Musically, ‘Lashings..’ its just pure ( D-U-M-B …)  punk-rock-fun. Five blokes in a room hammering away at it (oo-er)  and having a whale of a time, and it comes over in the recording.   Despite having one token ‘anti-war’ song, this is the sound of old-punks deciding the best way to fight the savage austerity of the Tories is to have a laugh, make your own fun and not let the bastards grind you down.

The album will also be available at the following gigs

Note – whilst writing this I compared notes with Dr Russ Bestley – ‘Pompey Punk’ and now an researcher and author working on a book on Punk and Humour.  He disagrees with me on some of the issues on Political Correctness and Punk and we plan to do a serious joint discussion piece in the near future.