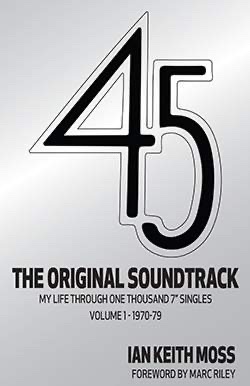 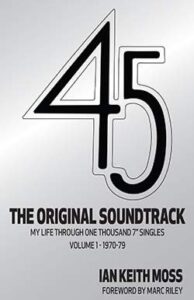 In a city that has produced more than its fair share of musical heroes, Ian Moss remains a steadfast figure in the Manchester musical underground. As one of the handful of people who were actually at the first Sex Pistols gig at the Lesser Free Trade Hall in Manchester in June 1976 and the co-creator of the legendary band Hamsters, who John Peel described as being too “dark and dangerous” to appear on his Radio 1 show, Ian has often found himself at the cusp of key events in the evolution of music in the city.

Let’s just focus on Ian for a moment before we take a look at the book; as the PR blurb says, he can genuinely ‘swear he was there’ to witness the Pistols first trip to Manchester. As the vocalist and lyricist of bands such as Stepbrothers, Sicknurse, Kill Pretty, and Four Candles, Ian has realised his own musical vision; but also created opportunities and spaces for other bands and artists as the founder and co-owner of the German Shepherd Record label. His writing reflects someone who loves music and wants to share it. It also reflects the personality of a man who has spent his life championing music that most people don’t get to hear. His previous book 100 Unhip Albums’ (We Must Learn to Love) was a hit with music lovers from all over the world.

His latest book, 45 The Original Soundtrack, or 45 The Original Soundtrack: My Life Through 1000 7” Singles: Volume 1 – 1970-79 to give you its full title; covers Ian’s growth from callow teenager to young adult during the golden years of popular music. It’s punctuated with photographs too, so you can see his development over the decade. The great thing about Ian is he loves all music, glam, disco, soul, reggae, punk, rock… nothing is off-limits, and everything is as valid as everything else which makes this book so interesting. It’s also not a ‘network television rundown’ of the popular hits of the year. I was often sent down rabbit holes, searching out tracks online and joining dots that I didn’t realise I needed joining.

Each section, or rather year in the book is preceded by a summary of events; notable births and deaths; notable books and films along with a summary of that year in music, and Ian’s experiences in that year. For youngsters like myself, who was born in the last year of the 1960’s it’s a handy reminder of ‘recent’ cultural history and helps put things into context. For each year, Ian selects 100 singles (chart hits and those that failed to chart (it seems unfair to call them ‘flops’ or ‘misses’; counting down from 100 to 1, detailing the A side / B side, artist and label (a thrill for a trainspotter such as I) then following this with a bit of insight and thoughts.

Not only insightful, it’s a great reference and educational book too. An example,  I immediately skipped to 1975, my first real memory of singing along to the radio was Bye Bye Baby by the Bay City Rollers. Chuffed that Ian had made this his 88th record of the year I was interested to hear his view and began reading… now I like to think I have a vast record collection, but in the year of Our Lord 2022 doth, I find the first song I knew all the words too was actually a cover of a Frankie Valli and The Four Seasons song. Thankfully because of iTunes I was able to listen to the original in seconds rather than having to scour the back pages of Record Collector or racks the local record shop to ease my curiosity.

45: The Original Soundtrack is a feast. There is so much in it to absorb. I could only manage a few pages at a time, soaking up the knowledge within, but soon after was picking up again for another course, time and time again. Honestly, if you’re reading this review you need this book. Unlike (criminally) many of the tracks in Ian’s 1000 singles, this is a hit!

A launch event for the book will be held on 13th April from 7pm, at Aatma, 14-12 Faraday St, Manchester. Free entry. Details here