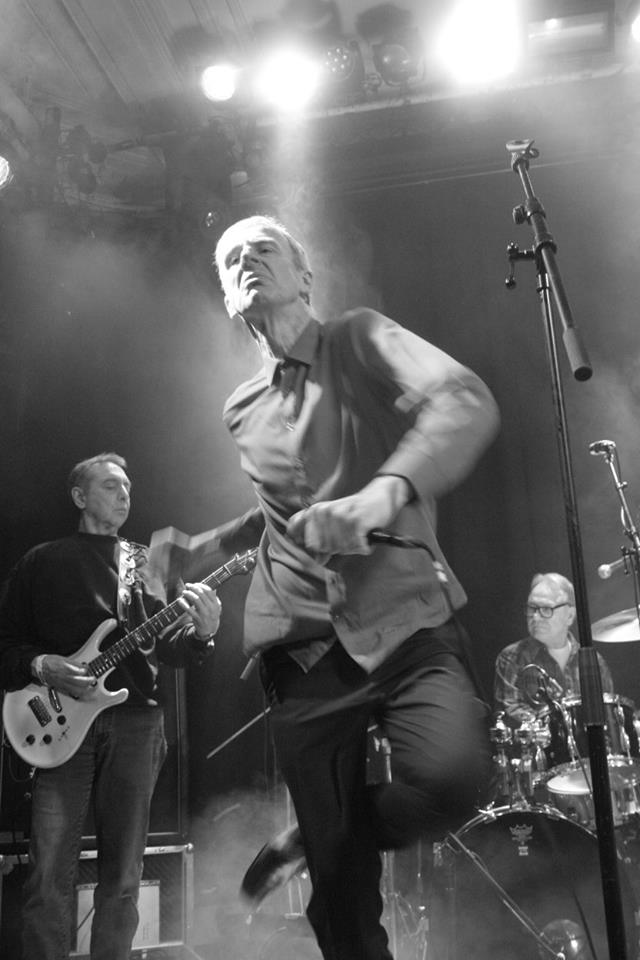 “Ever get the feeling you’ve been cheated?” It seemed that a bunch of upstarts and unfunny jokers wanted that feeling to be present at the Torso/No Fun/Plurex party upstairs at the Paradiso. Young people making fast and loose with other people’s memories, idiotic texts from a snotty presenter and weird takes on “what punk is” by bands who were a twinkle in most of the audience’s children’s eyes when the No Future generation hit its stride. How dare they? 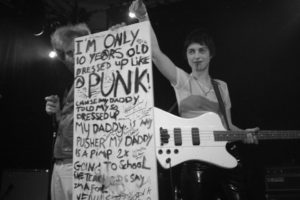 Further, this first shot in the 40th anniversary of punk in The Netherlands “campaign” also felt like a piece of pranksterism from those behind the labels Torso and Plurex (and existentialist Leideners, Smikkelbaard). Torso, Plurex and No Fun were three integral elements in the developments of Dutch punk (and post-punk) for sure; the No Fun shop especially. But bands like Tits, Rousers and Mecano weren’t really first generation punks. Bands such as VD Patients, The Flyin’ Spiderz and Ivy Green have more to claim to that mantle. And you do wonder whether after this night, someone (maybe in Panic, Suzannes, or God’s Heart Attack) will ask the legendary gig promoter Fer Abrahams to put on his “Showkees” Paradiso night again, one more time, to right the balance.

Regardless of questions of “authenticity” or “fitting tributes”, this was a hell of a night. Dutch punk (an amorphous term if ever there was one) has a magnificent and ongoing, if largely unnoticed legacy. The deal for this night was to showcase as much of that as possible whilst having (no) fun. Every band got 10 minutes to whack out their tunes. Plug in play and get off. But even in that short time there were inklings of how great it would have been to see these bands back in the day. Some of the bands packed an enormous punch with the quality of their songs and stagecraft (yes, really). Rousers, Filth, Mollesters and Mecano were outstanding in this regard and Tits and Helmettes rode a wave of emotion and reached heights your reviewer wasn’t really expecting (even with Tits’ daftness on full display).

But more of that later. Let’s start at the beginning and deal with the first sand in the vaseline. Leiden label Smikkelbaard had been called up to pick four “young” or “”new” acts to offset what could have otherwise been viewed by those on the outside as a tribute night. After all punk isn’t just a 4-4 beat and a guitar sound, even if many don’t like to stray too far from those parameters. One of these new acts, Sugar Coated Mindbombs (huge fans of NL punk incidentally) opened proceedings with a classic squat slacker-thrash gig that owed more to an Extreme Noise Terror rehearsal than old school, “1-2-3-4” punk. The Mindbombs managed to bash out 10 enthusiastic songscreams in 10 minutes, which left many (if not Pierre de Luxe from Mollesters, who danced with a great big grin on his face) bemused. Was this punk? Was this a piss take? It was bloody loud, regardless, in true SCMB fashion. 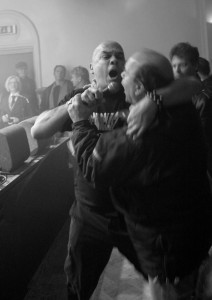 Following this assault was Mollesters, notorious at the time for being (ahem) uncompromising in their socio-cultural approach. On the night, they buzzed around the stage as if they alone owned it; their classic tracks like Plastic and I Am chugging along merrily, and benefitting greatly from some rock ‘n’ roll riffs thrown in by guitarist Do Gagliardi. All of the “showbizz” stuff was offset by some daft face-pulling by Pierre de Luxe. The crowd (a mix of original punks and their younger nephews, some still with ants in their pants) started to jig along. This was more like it; especially Plastic, with its deliberately tinny jangle and clockwork beat really hitting a chord. More good stuff was to come in the form of a great set by Rousers (now calling themselves Re-Users). Reduced to a threepiece, the band shrugged off any old issues with an invigorating display of sharp power pop, all riffs and chiming angles and growling counterpoints. Two of their tracks, Magazine Girl* and The Jump were just brilliant and made you realise they could have given Devo or The Feelies a run for their money. At this stage there was a definite sense of triumph in the hall, people were vibing off the fact that these “long-lost” bands could still cut it. (* OK I’m guessing here, because I can’t remember, but in my head, in my memory, they played Magazine Girl).

Completing a trio of oldie gigs were the legendary Tits, who had never played before. Apparently the last time they tried, a hotel had burnt down. Not a good omen. Still, I suspect many present had come to see Tits, just to tick them off the “seen” list. Tits was, after all, Minny Pops’ frontman, Wally van Middendorp’s first and last foray into punk. And their (brilliant) single Daddy Is My Pusher / We’re So Glad Elvis is Dead, the beginning of the Plurex label. This gig was always going to be weird, mind. And Wally, wearing a chef’s hat and red nose, played up to the notion that this whole tribute/anniversary thing was a bit light-hearted when all said and done. What was brilliant, though, was the bullish amateurism of their show; bassist Sam Tijoe spent most of the time laughing through the set. And an extended version of Elvis needed two cracks of the whip, due to ineptitude, or laughter, or just plain weirdness. It mattered not. Their take on Daddy.. was the embodiment of what made the night special. Funny, warm, ramshackle and full of character, this absurdly basic song took off; Wally bawling out the lyrics like he was possessed. So there you go, just over ten minutes of punk history, precious only to a few, and that’s just how it should be. 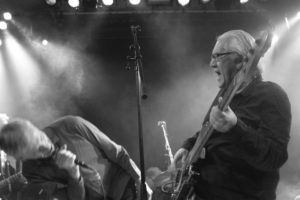 But what’s this? Oh no, not the young ones again! KIEFF (a bunch of doleful 17 year olds from Oegstgeest playing only their second gig, how “punk” is that, even if it was one more than Tits?) were up next. The sound and chatter in the hall didn’t do their quiet, stand-offish slacker pop many favours mind, but their take on Tits’ Daddy is My Pusher was (if anyone had listened in) a gem of super simple, can’t-be-arsed cockiness.

There was a time when Joris Pelgrom was the same age as KIEFF… and in a band (Helmettes) who made one of the most loved singles of the era. (For those who bought this classic dubbeltje, anyway). Half Twee / I Don’t Care What The People Say still sounds like a blast of righteous energy and (almost incoherent) frustration. Given that these two songs constituted the entire Helmettes gig, Pelgrom & co (here: post-punk impresario Mick Ness on bass, legendary Mecano guitarist Peter Kooyman and original drummer Ron Kreeft) stretched out I Don’t Care What The People Say into a slow-burning racket that eventually boiled over, and topped matters off with a riotous Half Twee; Pelgrom baying out the lyrics and gesturing off to the crowd like the last man standing at the bar. Throw in a great chiming solo from Kooyman and most of the crowds’ cup was full. This incidentally was one of the few times when the mobiles were raised to the air (punk etiquette overruled in a rush to catch the moment). 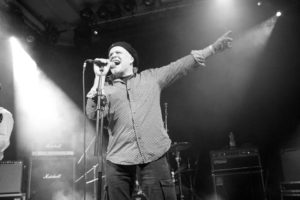 Just at the point when many punk cups were overflowing a vision of darkness appeared, like Milton’s Satan in the Garden of Eden. This vision of darkness were called Sid and Jacco. Known art terrorists in their hometown Rotterdam, the two had seemingly – on this performance at least – decided to deconstruct punk. This entailed Sid spraying a gob-full of beer and chewed nuts onto the audience, and playing the most lumbering bass line ever whilst Jacco, looking like a refuge from Charlie Manson’s cult, wandered around the hall with a big canvas. Once onstage, he attacked the audience with a mic stand. Two old rockers intervened, still up for a ruck after 40 years. This was getting tense, maybe too authentic… “Boo!” went the hall. “Hipster!” The ultimate insult… Plastic beakers started to get chucked on the stage. Insults were exchanged between “band”and crowd. But Sid and Jacco wouldn’t go until the canvas – adorned with names from all the punk band members – was sold off to the highest bidder. Somehow they decided – after no takers were found – to saunter off anyway. What was this all about? A cute parody of retromania, or just two chancers taking the piss? The jury is out. Still, as Roger Eagle would never have said, it was legendary after a fashion. 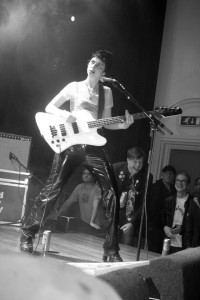 Righting this utter outrage in many people’s eyes were Filth, who’s gig was a masterclass in old school nous and assured showmanship; Dick Bakker steered the band along courtesy of a pulversing bass line (one that visibly shook the boards of the stage) and a canny line in vocal delivery. Of course the hall got Don’t Hide Your Hate (there would a riot if not) but other surprises involved a shredding  take on So Damned Close, and a cover of classic NL punk tune, by The Softies Suicide Pilot. Did anyone see that one coming? 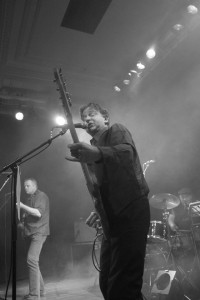 Party time feel restored we had time for one more young band, Rotterdam’s Venus Tropicaux. It was getting loose in the hall, and Venus Tropicaux somehow used this to their advantage; their skanky, needle sharp punk-pop hitting the groove with many. Of course they don’t do anything really new (Slits, Au Pairs) but they really have something, a scratchy, restless, standoffish attitude that has something of Jozef K about it, and one did win some in the crowd over. Oh, and it was nice to see a few women leading the charge on such a male-dominated night. 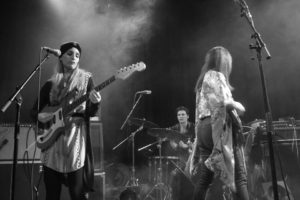 Last up were Mecano, who played so late because they had to wait for their drummer to show. Regardless, this was possibly the gig of the night; despite it being only two tracks (Meccano, and Face Cover Face). Meccano was a brilliant choice of opener; its structure a mix of proggy looseness and post-punk grandeur (expertly interpreted by the band) allowed Dirk Polak all the room he needed to remonstrate. Polak’s great gift is his timing; switching expertly between eloquent soliloquies and vicious rants. There is something of the thespian in his approach, but he knows when to cut back and let this extraordinarily powerful band (with surely one of the greatest of all back catalogues of the old Dutch punk/post-punk acts alongside Minny Pops, Mekanik Kommando and Nasmak/+Instruments) room to flex its muscles. That they did on Meccano and a burning, crashing version of their first song, Face Cover Face (the first and the last time they played it, apparently). A timeless band and one who brought the night to a brilliant finale. 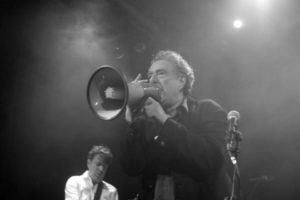 So there it was; 10 bands in less than three hours. Everyone felt a bit giddy after such a roller coaster ride. Your correspondent did at any rate… And just to round things off there were fun and games aplenty, involving Captain Beefheart singalongs, running round a park at 3am and acapella versions of old punk numbers in “media” bars. Dutch punk eh? They should bottle this spirit.

Big thanks to Marcel Harlaar for the tremendous pictures.