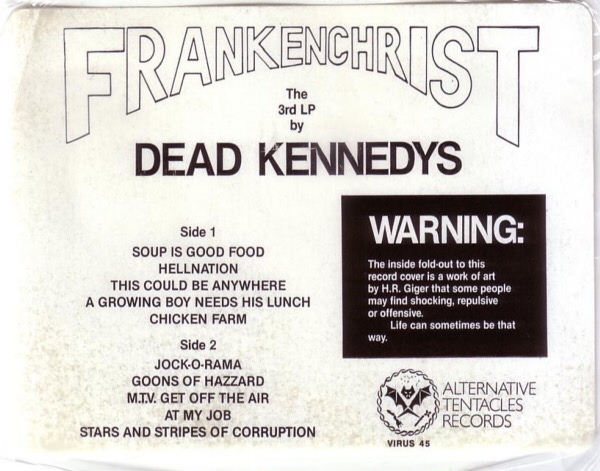 In 1977, punk took hold on both sides of the Atlantic. For guttersnipes from Los Angeles to Amsterdam, the spring sortie from The Clash rang clear:
“No Elvis, Beatles, or The Rolling Stones / In 1977”
As it turned out, Elvis Presley only had a few months to live (d. 16 August 1977). The Beatles were still making so-so solo records, and The Rolling Stones were in repose after wrapping up their worst sequence of studio LPs to date (Goat Heads Soup, It’s Only Rock ’n Roll, Black and Blue).
Over the next four decades, the cycle of punk provocation and moral outrage created some of the most compelling moments in rocknroll history. The expression of anger as an energy and the subsequent popular indignation remained in punk’s favor through the riot grrl years, but what about today? In these difficult times, when anger and outrage serve as our lingua franca, can punk still provoke?
To imagine punk’s future, let’s take stock of seven magnificent moments of punk insolence since 1977.
1. The Sex Pistols’ (Non-)incident at Heathrow Airport (4 January 1977).

Fresh from their legendary exchange with Bill Grundy on Today, the Pistols headed to Holland on a morning flight, allegedly plague-green with hangovers. That afternoon, page one of Evening News condemned, “These Revolting VIPs!” The Pistols reportedly vomited and spat their way through the terminal. “We had been keeping an eye on them in the departure lounge,” noted a KLM official, “because we thought they were thoroughly unsavory.”
EMI’s Graham Fletcher knew first-hand that the report was absolute rubbish. He accompanied the Pistols to Heathrow and, due to their tardy arrival, the band bypassed the check-in desk for KLM. Still, quick-draw MP Robert Adley penned a letter to Sir John Read of EMI that same day. “Surely a group of your size and your reputation,” he imagined, “could forgo the dubious privilege of sponsoring trash like the Sex Pistols.”
Two days later, they did. McLaren appeared forlorn after EMI dropped the band, but soon enough “began to eye the future with a renewed sense of optimism.” With the proper label, McLaren imagined, the Pistols “‘could make a really big deal, [and] get into the movies.” For John Scanlan, author of the sharply concise Sex Pistols: Poison in the Machine (Reaktion Books), this moment marked a key turn in McLaren’s imagination. All McLaren needed to do was generate more headlines in order to monetize the moral panic. McLaren displayed his boldest, truest colors on 7 June, the Queen’s Silver Jubilee, as river police dragged him from the deck of the Queen Elizabeth. “There’s Johnny Rotten!,” McLaren shouted. “Arrest him!” Into the shadows, Rotten escaped.
Others didn’t, of course. The casualties included the band itself (January 1978), Sid Vicious (d. 2 Feb 1979) and, by some accounts, The Ramones. “Whatever chance the Ramones had to get on the radio based on the merit of the music was then wiped out by the Sex Pistols,” according to their manager Danny Fields. “[Punk] became too hot to handle.”
2. Elvis Costello’s Performance of “Radio, Radio” on Saturday Night Live (17 December 1977).
McLaren’s shenanigans paid off well for Elvis Costello, whose LP My Aim Is True (Columbia) landed on the US Billboard’s national list of top requested LPs the second week of December. While the Pistols awaited their visas in London, Costello and the Attractions gladly subbed in on Saturday Night Live.
According to Costello, Columbia brass wanted songs from My Aim Is True. In first half of the show, the band obliged with “Watching the Detectives” and, upon their return to the stage, played two dozen bars of “Less Than Zero” before Costello awkwardly marshalled them to a halt. “There’s no reason to be doing this song here,” Costello told the audience, and counted into a whip-snap rendition of “Radio, Radio.”
https://www.youtube.com/watch?v=eD_24nDzkeo
Costello later recalled that the storyline for “Zero” about UK fascist Oswald Mosely was likely to be lost upon American listeners. For New Yorkers, especially, the storyline of radio and its fools was not. Critics Lester Bangs and Robert Christgau offered regular broadsides through 1977 against the schlock served up by FM programmers.
Popular music is rarely aesthetically, politically, and commercially effective. By way of a modest refusal, Costello celebrated his connection to the audience instead of “pushing the product” (“Radio, Radio” appeared in the US on This Year’s Model in May 1978). Most importantly, the legend still persists that producer Lorne Michaels issued Costello’s lifetime ban from SNL for offending General Electric, corporate sponsor of NBC and manufacturer of transmitter technologies and transistor radios—and thereby lends credence to the notion that corporate brass once feared the power of post-punk.
3. The LP Cover for The Slits’ Cut (Sept 1979). 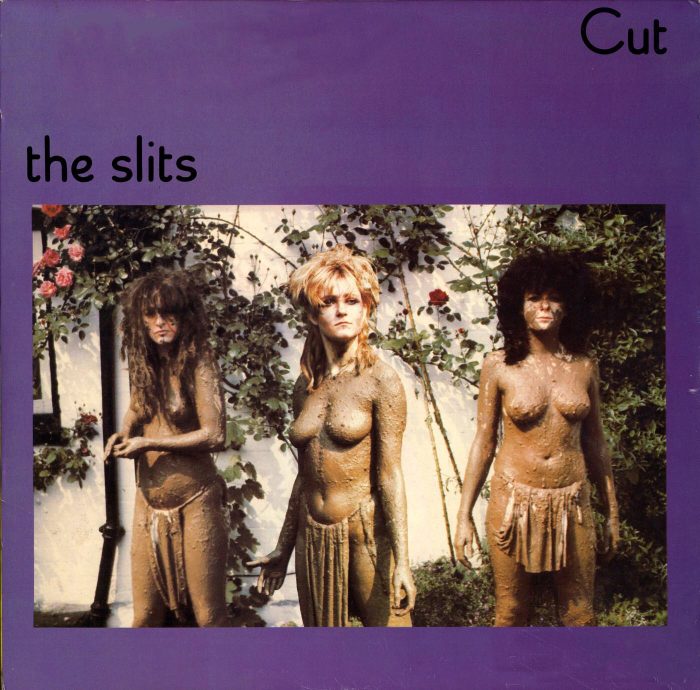 The album and its cover were three years in the making, and The Slits wanted to get both of them right. After signing a “complete control” one-album deal with Island, guitarist Viv Albertine butted heads with Island about the LP cover, and won. “We’ve waited so long and been so careful about our output and our image,” Albertine noted in the excellent Clothes Clothes Clothes Music Music Music Boys Boys Boys. “We can’t just let it be taken over by people who don’t understand what we’re trying to do and say.”
Pennie Smith and her Pentax captured the antics of Albertine, Tessa Pollitt (bass), and Ari Up (lead singer), as painted faces yielded to mud-caked torsos. A serendipitous remark resulted in a set of improvised loincloths. “We know we have to have a warrior stance, not try and be all seductive,” according to Albertine. “We want the photo to have the right attitude, not be prurient.”
Cut’s marketing campaign (September 1979) included big posters plastered all over London. Music editors recoiled. A passerby crashed his car. Feminists took opposing stances. Vivien Goldman at Melody Maker got it straightaway: “[Albertine] looks like the statue of Dame Edith Cavell [a WWI hero] … Playboy pinup thrills are not foremost in their minds.” The grooves inside proved equally disruptive. Their homage to dub and reggae anticipated the celebrated departures by The Clash and Public Image Ltd. from the aesthetic orthodoxy of punk.
Such heresy came with a price, and the toll collectors included key figures in the music industry. “No A&R men were interested in us for a long time,” Albertine lamented. In 1981, CBS released The Return of the Giant Slits (UK only), and the band broke up eight months after. The daily physical and verbal harassment was particular exacting for Albertine. “My face got so hard. I walked past a window in Knightbridge and I caught sight of this hard blonde woman, and, my God, it was me.”
Still, Cut solidified The Slits’ legacy with a range of rock rebels, from Kurt Cobain to Carrie Brownstein. “Discovering the Slits and their album Cut was such a formative moment,” Brownstein recalled. “The image of these women caked in mud on the cover was so shocking and exciting.”
4. The Clash’s “Not For Sale” Gesture at the US Festival, San Bernadino, California (28 May 1983).
In December 1982, for the first time in six years, The Clash turned idle. With the success of Combat Rock (May 1982) and a tour with The Who, the band and their manager got their books in order. Even Joe Strummer, the “king of the squatters,” bought himself a flat. In spring 1983, manager Bernie Rhodes inked a $500,000 deal to headline day one of the US Festival. For festival sponsor Steve Wozniak of Apple, the US Festival represented a counter to the “Me generation” of the 1970s. Rhodes, though, dismissed the ethos of solidarity and saddled up for one last gunfight in the American west.
On Saturday, 28 May, with 150,000 people milling about during Men at Work’s set, Rhodes took the festival hostage. In Redemption Song: The Ballad of Joe Strummer, Chris Salewicz recounts Strummer decrying the $25 entrance fee (which was alleged to be $17 originally), demanding Wozniak cough up $100,000 for a summer camp for disadvantaged youth, and serving as Rhodes’ pawn in an ill-defined standoff. “They didn’t have a fully formed agenda,” noted drummer Pete Howard. “They thought anger was cooler.”
After some frantic negotiations with festival organizers, The Clash took the stage two hours late before a backdrop of two massive banners: “The Clash Not For Sale” and “Sex Style Subversion.” The first sign alluded to Strummer’s frustration with Wozniak’s ties to Apple, and his alleged desire to “re-stag[e] Woodstock for his own ego gratification and tax loss [i.e., a corporate write-off] in his own backyard.”
Other bands had already dispensed with any artifice of authenticity. In 1980, Earth, Wind & Fire danced and swayed for Panasonic’s bottom line, and Jovan Musk sponsored the Stones’ 1981 American tour. If Strummer struggled to articulate his frustration, he clearly sensed the difficulties of maintaining any semblance of politics as a pop star.
https://www.youtube.com/watch?v=wPXvIxLXWDM
The second banner quoted McLaren, Rhodes’ one-time rival, who in 1982 bemoaned the dearth in current new wave acts of “sex, style, and subversion.” Rhodes took great pride in his avant-garde sensibility, but in this moment turned lazy and derivate. Other members of Clash-de-camp were equally exhausted. After years of indulging “rock’n’roll Mick,” Strummer and Paul Simonon were scarcely speaking to Mick Jones.
The post-gig fisticuffs at the US Festival between camp members and concert staff shored up some of the goodwill forsaken over the past year, but its effects were fleeting. “My exclusion from the mock brawl was further proof that I was no longer part of the inner circle,” noted backline roadie Barry “the Baker” Auguste. “With sickening clarity, I felt my time was finally up.”
Contradictions carry weight—a weight The Clash could no longer bear. In September 1983, Strummer and Simonon kicked Jones out of his own band. On his own accord, the Baker soon followed. Two years later, the “only English band that matters” ended with a whimper.
5. The Dead Kennedys’ Frankenchrist LP, the Inclusion of a Poster of H.R. Giger’s “Landscape XX,” and the Subsequent Trial (October 1985).