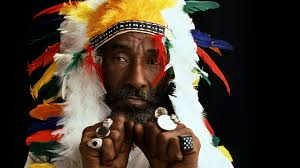 You can tell a man by the company he keeps. Lee ‘Scratch’ Perry’s quality and reputation is underlined by four special support acts. ‘Scratch’ junkie Sean Diamond celebrates.

As anyone who’s witnessed a set from the great man will surely tell you,  a Lee ‘Scratch’ Perry show transcends the idea of the mortal ‘gig’ and instead offers up a completely unique, involving experience that works on both a communal and internal level. One thing that’s struck me after thrice seeing the great man is the quality of the support slots at each show which completely poo-poo the notion that reggae is somehow ‘dead’ and confirm that the British reggae scene is, in fact, more alive, exciting and vibrant than ever.

In these austere times, and with the zombie conglomerate Camoron And The Condemned seemingly hell bent on making  the lives of all but the richest of their multi-millionaire flesh eating friends a nightmare which even Freddy Krueger would run away screaming from, we need fire in our hearts and smiles on our faces. In the order of viewing, here are four Lee Perry supports who have knocked me for six with their sets. First up….

The first time I saw Scratch was at The Regal in Oxford. A local band called Dubwiser came on stage and blew me away completely; a thrilling rollercoaster ride through the soundworlds of roots, dub, dancehall, ragga, punk, pop, psychedelia and beyond, with the dreadlocked frontman Jonas acting as the operator, one of the most compelling live acts I have ever witnessed. ‘Eyepopper’ is the leading track from the new ‘Dubwiser Dancehall’ EP, a catchy slice of electro-ragga with Jonas and drummer Spider taking centre stage in the video. Not to be missed!

The second band on at The Regal were Laid Blak. Hailing from the fair old city of Bristol, a hot bed of musical talent and innovation, Laid Blak proceeded to dazzle with their white-hot, energetic 21st century sonic meltdown, several of their songs sounding like about twelve different genres all playing at once full blast on a specially erected PA at the top of an armoured tank. Centred around the bass line for The Stranglers’ classic  ‘Golden Brown’, this new video is a shining example of the band’s bouncy, boundless enthusiasm and insight. Is that summer I can see on the horizon?

Describing themselves as “sunshine music from Toxteth”, I came across White Bicycles at Mr Pipecock Jackson’s show at Eric’s, Liverpool, in February last year. A riot of brass, bass, ska, steel drums and surfing, this Liverpudlian eight piece astounded with their versatility and wide range of influences; everything from indie punk to ska, pop, roots and more reflective numbers like the featured track, ‘Today’, a righteously blissed-out aural evocation of lying on a Caribbean island with an ice cold can of Lilt, by way of the River Mersey. Who needs a holiday?

The most recent discovery, the support for Mr Perry at his Kazimier show. Combining the anger and energy of punk, the fire and brimstone sermonising of roots and the foreboding cobwebs of dub, Greater Manchester/Merseyside’s Rasta4Eyes mean business. Frontman Billy McKelvie is a formidable stage presence; alternating between guitar, harmonica and melodica and with a steely, thousand yard stare in his eyes which practically screams “madman”, these young men are not to be messed with. Intense stuff, not to be taken lightly. Essential.

Lee ‘Scratch’ is currently in the middle of a UK tour, dates can be found here. Be sure to get along and report back on the, inevitably, great support acts!