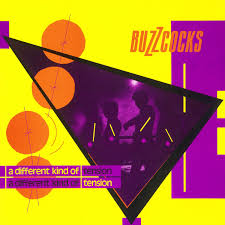 Paul Hanley is part of one of the great post punk rhythm sections. Along with his brother Steve he was a core member of the classic line up of The Fall and they can both now be found as the rock in Brix And The Extricated. (check their facebook page here). In this piece he argues that punk delivered some great third albums…

Mr Robb’s recently re-promoted LTW article regarding the difficulties the original punk bands encountered when it came to their second album (which by and large were fairly unedifying) virtually demanded a follow-up article on the class of 76’s next attempts – and the fact that on the whole they really got it right third time round. (In case you’re wondering, I haven’t included ‘Black and White’ by The Stranglers here because I’d argue that they didn’t produce a fully convincing and consistent hybrid of pop and menace until ‘The Raven’; which saw them finally drop the rampant sexism and calculated misanthropy that somewhat blighted their earlier efforts.)  I was half convinced to call ‘Metal Box’ John Lydon’s third album just so I could include it here, but my conscience got the better of me.

The Damned’s reformation in 1979 (less than a year after they’d originally split) was confirmation that the decision to break up a band with such potential was premature at best. That said, the hiatus did provide an opportunity for Captain Sensible to flex his guitar, keyboard and song-writing muscles, so he was more than ready to fill the shoes of the non-returning Brian James when The Damned resumed active duty. ‘Machine Gun Etiquette’ represents the first recorded fruits of this renewed activity, and the fact that it contains three of their most popular and enduring singles as well as a good crop of album tracks (notably ‘Plan 9 Channel 7’) is testament to the power of a year apart. First single ‘Love Song’ (featuring a searing Lemmyesque bass intro from new recruit Algy Ward) proved that a diversion into a more heavy-metal style needn’t come at the expense of pop sensibilities. The lyric remains one of their most up-beat, the chorus one of their catchiest. A corresponding marriage of prog and pop was to be found on ‘I Just Can’t be Happy Today’ – dystopian lyric underpinned by the Captain’s finest performance on the ivories, complete with an immense two- fingered keyboard solo.   Flying in the face of what was expected from Punk bands, ‘Smash It Up Part 1’ can legitimately be described as lovely  – a dreamy instrumental that remains in their set to this day, while part 2 still vies with ‘New Rose’ for the title of definitive Damned song.  A triumph, then.

Key track ‘Smash It Up (Parts One and Two)

The Jam – All Mod Cons

After the justifiably lukewarm reception meted out to their previous album, it was clear that the band, and Paul Weller in particular, would have to buck their ideas up for their next outing or risk being considered passé. (The negative critical reaction to ‘This Is the Modern World’ appears to have permanently dented everyone’s faith in Bruce Foxton’s song writing ability, especially himself, and tellingly the only song on here where he gets a lead vocal is a cover of The Kinks’ ‘David Watts’).

Fortunately Mr Weller’s renewed labours unearthed a talent for song writing only hinted at on ‘In the City’ and ‘This Is the Modern World’.  The quality of his lyrics, which in truth hadn’t been much better than Foxton’s to this point, massively improved and his musical panorama widened commensurately. The bible-black ambience of stand-out track ‘Down in The Tube Station at Midnight’ (the spikes and angles of the musical accompaniment expertly mirroring the good hiding meted out in the lyric) didn’t stop it becoming a live tour-de-force complete with that rarest of beasts  – a positively exhilarating drum solo.  A number of the other songs on here (notably ‘In the Crowd’; ‘To Be Someone’ and ‘A-Bomb in Wardour St’) can be counted amongst the band’s best work and at least four took up semi-permanent residence in The Jam’s live set. On top of that ‘English Rose’, which they never played on stage, is now often aired at Weller’s solo gigs, reflecting the fondness in which it (and ‘All Mod Cons’ as a whole) is rightly held.

Key Track ‘Down In the Tube Station at Midnight

Not the most difficult of sells this one, it’s Rolling Stone’s album of the eighties for God’s sake (yes, it came out in 1979 in the UK but it didn’t make it across the pond till January 1980, so it’s a perfectly legitimate candidate) and it represents the zenith of The Clash’s song writing and recorded performance. All four are at the top of their game.

Most importantly, Joe’s lyrical combination of erudition and gormlessness is at its most endearing. Having exhausted his thoughts (for now at least) on being young and poor in London, UK politics and the band itself, he is forced  to look elsewhere for lyrical inspiration, with refreshingly efficacious results. Reflections on Hollywood film stars (‘The Right profile’); Growing older (‘Death or Glory’) and The Spanish Civil War (‘Spanish Bombs’) sit comfortably next to his ruminations on the perils of drugs, both corporate (‘Koka Kola’) and domestic (‘Hateful’).

Similarly Mick’s musical landscape manages to be vastly more eclectic than on previous albums while remaining entirely appropriate and authentic throughout. He tackles Jazz, Reggae, Ska, Rock and Roll and Motown with as much legitimacy as he ever brought to playing Punk. What’s more he sings Joe’s best lyrics (such as the nakedly autobiographical ‘Lost in the Supermarket’) with at least as much conviction as his own signature number, the originally unlisted ‘Train In Vain’.

Paul gets a solo cover shot, and more lucratively a solo sogwriting credit on ‘Guns of Brixton’, where his -ahem- unique vocal style ensures its lyrical call to arms never feels overblown. The album features some marvellous bass lines too– that intro on the title track is only one amongst many. (‘Death or Glory’s bass is particularly melodic).

Finally, though he didn’t start getting writing credits (and a vocal of his own) till ‘Sandinista’, Topper Headon’s contribution cannot be overstated. Now he’s firmly settled on the drumstool his drumming and percussion add so many colours to The Clash’s palette they are virtually a different band from the one that made the first two albums.

The way the Clash approached ‘London Calling’ (ferreting themselves away in a cheap rehearsal room and not emerging till they had enough songs to record an album) worked perfectly, so naturally they never adopted this method again. For ‘Sandinista’ they went straight to the legendary (and far from inexpensive) Electric Lady studios in New York with no songs at all, started the tape rolling as soon as they’d got their jackets off and kept it running till they’d meandered their way to a triple album. Joe’s mates, Micks girlfriend, Kosmo’s kids and Topper’s dog Battersea were all asked to contribute and while the album they ended up with is still in many ways a lovely thing, it could never be described as concise. By the time the significantly snappier ‘Combat Rock’ rolled around it was difficult enough to get Mick and Joe to share a stage, never mind a cramped rehearsal room. ‘London Calling’ then, is The Clash at their best.

Buzzcocks – A Different Kind of Tension

The bands’ final album before the split isn’t considered by many to be their finest effort but there is a case for arguing that on here Shelley in particular was at his absolute peak, both lyrically and musically. He was clearly expanding his horizons, and while the album is not without its flaws (we’ll get to them in a minute), several of the tracks here count among Buzzcocks’ most excellent. Shelley sets out his stall on the leadoff single ‘You Say You Don’t Love Me’, which matches a typically agreeable melody to a lyric that sees him finally admitting that over the last two albums and  four singles he’s probably told too many people he loves them, and it’s time to stop. In fact, as the run out to ‘I Believe’ (the best track on the album) confirms, he’s just about given up on love altogether. He conveys his confusion over what to replace it with over several of his most thoughtful tracks, and side two of the album is a near perfect sequence of Shelley at his very best. The drums, bass and production are (as ever when Maher, Garvey and Rushent are involved) magnificent throughout.

After submitting ‘Autonomy’(which remains one of his finest contributions to the Buzzcocks catalogue) for their first album, Steve Diggle struggled to find his way for his subsequent efforts, and was reduced to emulating Shelley, both lyrically (‘Love Is Lies’) and musically (‘Promises’). On splendid single ‘Harmony in My Head’ he finally succeeded in finding his own voice, and was rewarded with no less than three tracks of his own on ADKOT. Unfortunately his new found confidence in his writing ability isn’t yet matched by the consistency of his output. ‘Sitting Round at Home’ is at least successful in conveying the frustrations of a musician on his day off (though unlikely to garner much sympathy) and ‘Mad Mad Judy’ just about conceals its tatty lyric beneath the braggadocio of its musical aggression, but in stretching to three songs Diggle’s threadbare musical cloth begins to come apart at the seams. ‘You Know You Can’t Help It’ (which could only have been written as an attempt to get as far away as humanly possible from Shelley’s considered romantic vignettes) is frankly, embarrassing. The lyric, which sets out to prove that not everyone in the band is bisexual (who cares?) is mirrored perfectly by the ham-fisted heavy metal guitar solo, itself a stark contrast to the crafted and melodic lead lines Shelley routinely adds to his tracks.

Traditionally side two of Buzzcocks albums give hints of what is to come, (though all the tracks on the second side of ‘ADKOT’ are by Shelley) but sadly after three more singles (where Diggle was finally successful in standing toe-to-toe with Shelley in the song writing stakes) the band split, and this imperious line up never recorded together again.