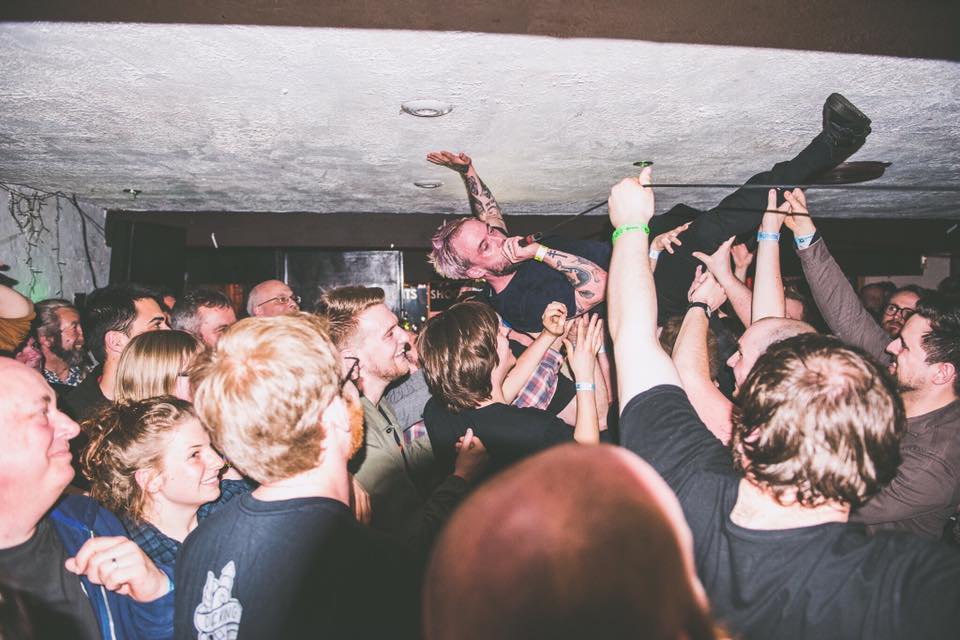 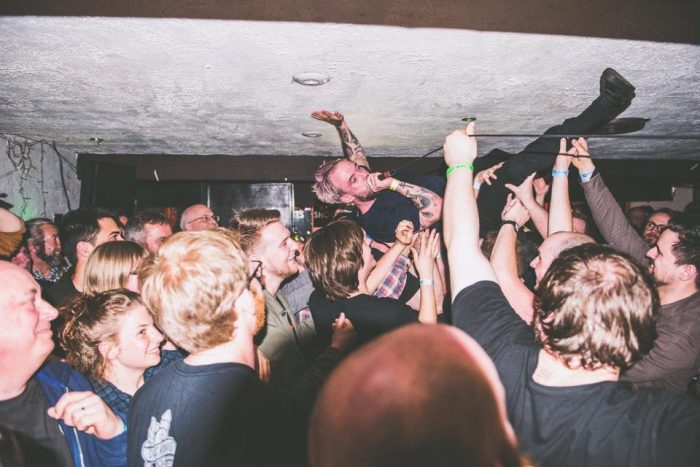 Returning for a second year Derby’s multi-venue all-dayer has grown in size and gives the small city a big event in their cultural calendar. Louder Than War editor Sarah Lay reviews.

It’s amazing just how big this little city feels as you’re striding across it on a sunny Spring afternoon, the streets bustling with people who gather in knots around the doorway to each of Derby’s music venues, each of us trying to catch another set from the many available today.

Now in its second year 2Q has brought the multi-venue city-centre format of festival to Derby, a city with a quietly vibrant scene but often (not always) overlooked on the touring circuit in favour of nearby neighbour Nottingham. Not so today as across ten venues almost 100 bands take to stages for this one-day music fest. Growing in size and stature from last year’s first run 2Q has shown itself to be a serious contender in the one-dayer city crawl calendar.

The crowd ebbs and flows throughout the day – from small and intimate rooms above pubs to historic theatres as well as the city’s two larger music venues and a host of stages inbetween – but there was no shortage of choice as bands from across the spectrum of guitar music thrashed, strummed and three-chord wonder’d their way through the day. And while headliners at both ends of the crawl circuit packed out their venues – returning indie underdogs Milburn at The Venue and Temples leaving the late-coming but eager outside the at capacity Silk Mill Museum – the performance of the day came much earlier and in front of far fewer people.

The queue built for Idles well before the band were due to play the small stage of the Vines, the sort of low-ceilinged, creaking floored and oak-beamed pub expected along Derby’s historic Saddler Gate. The room was at capacity as the band de jour began and before long the chaos of the mosh pit was reaching all corners, the wooden floor gently bouncing beneath our feet.

Before long frontman Joe Talbot was hoisted aloft, his hands pressed against the roof as he travelled back and forth, the anger of the Bristol punks songs infecting the crowd as violently good times. In truth this band could have headlined one of the much-bigger venues but as their reputation grows it was something extra special to see them in this dimly lit and heaving space.

There were plenty of other high points across the day – different flavours of guitar music drawing different parts of the overall flock – but the usual unavoidable clashes of multi-stage festivals meant that some due a bigger audience missed out. One such was Hannah Lou Clark on one of the larger stages, newly added for this year in the Silk Mill Museum, deserving of a greater number but holding those there rapt with infectious and fuzzy guitar lines, pop melodies and laid-bare lyrics.

On the same stage Inheaven soon got hands aloft as their grunge-infused dream-pop, with plenty of chewy distortion to go along with the hands in the air understated anthems. Jaws too found their stride as hundreds packed into the Hairy Dog to catch the band’s alt-surf rock. Elsewhere Hooton Tennis Club got them up and dancing in the Guildhall theatre, John Power doled out Cast and solo numbers in the ballroom of the Old Bell, and Tall Ships played their pop-by-way-of-math-rock at the Bluenote. Indie, acoustic and noise bands competed for attention, the local music scene represented sparsely in favour of giving a local run out to those touring bands in the midfield of music.

There was just one stage offering non-musical delights as Dubrek Studios hosted a Word Wise spoken word line-up including turns by poet Jamie Thrasivoulou and LTW contributor, author and poet Sophie Sparham among others. The stage marked an interesting inclusion in the programme, a sudden but welcome diversification and a showcase for an art form just as punk as any music has ever been.

In an already busy festival calendar city crawl all-dayers have started to edge in ahead of the main season. While Derby might not be the biggest city on the circuit, and with a line up which ploughs heavily in a narrow furrow of musical style, as a relative newcomer 2Q is certainly making its mark and gaining an enviable reputation among punters and award-givers alike.

2Q is set to return 7 April 2018 with early bird tickets on sale now, keep an eye out for further updates on Facebook and Twitter.

All words by Sarah Lay. Sarah is editor of Louder Than War and you can read more from her in her author archive. You can also find her on Twitter and her wider portfolio of music writing here.

Image of Idles at 2Q by Lindsay Melbourne / courtesy of 2Q.