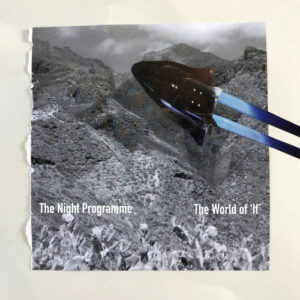 The Night Programme: The World of ‘If’

Paul Foster take his The Night Programme moniker further onwards with this his follow up to 2017’s Audition. Simon Tucker reviews.

Paul Foster has, in various guises, been making music since the 1980s and it was when he wore the clothes of Dementio13 that he really started to wake waves and whilst that persona has officially been put on the shelf it is his work as The Night Programme that Foster has decided to explore further. 2017’s Audition was a great slab of electronica that carried an accessibility and melodicism about it and for this latest album Foster has proclaimed in his press release that he wanted to push this side of things further….he is partly correct for The World Of ‘If’ is not just dreamy synth roll outs or deep techno workouts. Instead it is multi-faceted work that eschews all normal conventions (especially in the songs running order) and works to its own rhythm. This is an album which gets better and better the further you get into it and whereas a lot of albums since the long-play was introduced are front-loaded to grab the listeners attention, The World of ‘If’ actually starts with what is the weakest track on here. Rictus Grin has all the right elements but not necessarily in the right order. It is a track made up of four distinct parts and it is the way Foster makes the track transition between these section that make it a jarring listen with the beauty of the intro being suddenly upended by whip-turmoil and crashing drums. It is abrasive and uncomfortable yet when the third and forth sections make their entrance you get a sense of what Foster was setting out to achieve with the track. Maybe this is his way of throwing off casual listeners, but whatever the reasons, it is this writers duty to inform you to stick with it as the album is just getting started and there is a lot to discover on the rest of the way.

The idea of split narratives seems to be the running thread throughout The World of ‘If’ echoing our own flick-between-apps state of living. Shadow Of A Doubt which follows Rictus Grin announces itself on a deep rumbling sub-bass, wobbling and squirming like dubstep meeting Carter Tutti Void before a sudden breakbeat announces itself making the song swing and a gorgeous and light melody line starts playing over the top. Three worlds colliding into what is a perfect harmony….and this is just the first few minutes as the track then proceeds to carry on morphing to its lovely glistening closure.

Whilst The World Of ‘If’ can seem confused on first listen it never once feels like Foster has just thrown everything at the wall in the hope that something sticks. In fact it is an album that is firmly in the multiple listen category as there are constant callbacks to themes and motifs throughout which when absorbed and investigated by the listener show us what a vivid world Foster has created.  The country inflections of Badly Drawn Country tap into the same melancholy as the dystopian onslaught of Blood and Zed Not Zee (which contains a stunningly beautiful last section) and whilst they are a completely different soundscape they share that feeling of being far from home, calling out to anyone who can listen for help to get you back.

Album highlight Dysko has the hard-edged patterns and punch of prime AFX and has an inherent sense of danger and paranoia that tracks Ephem Error and Through Plastic Eyes carry through them. It is on tracks such as these and the Rimbaud referencing ‘Novel’ and ‘Phrases’ where the idea of a more smoothed out The Night Programme release is shown up as a sleight of hand by its creator. These are dense and unsettling numbers….and are frankly rather wonderful.

The World Of ‘If’ is not hear to take you by the hand and gently soothe you for an hour. It isn’t here to be shoved in a box of your own creation. It is an album hard to tame and to come to terms with. You don’t just let this album wash over you as background fodder. If you do not engage with it fully it will either a) alienate you or b) not connect with you at all. Paul Foster (The Night Programme) has created an album that demands you work at, finding your own ways into it. It is not an easy ride and is not an easy listen and that is its beauty. With so much disposable content floating around out there, here is an album that plays like a glorious jigsaw puzzle where at points it seems that Foster has deliberately left pieces missing for you to go find. An album for mind as much as heart. The World of ‘If’ is Foster’s finest work to date and you should take some time for yourself to discover its multiple charms.