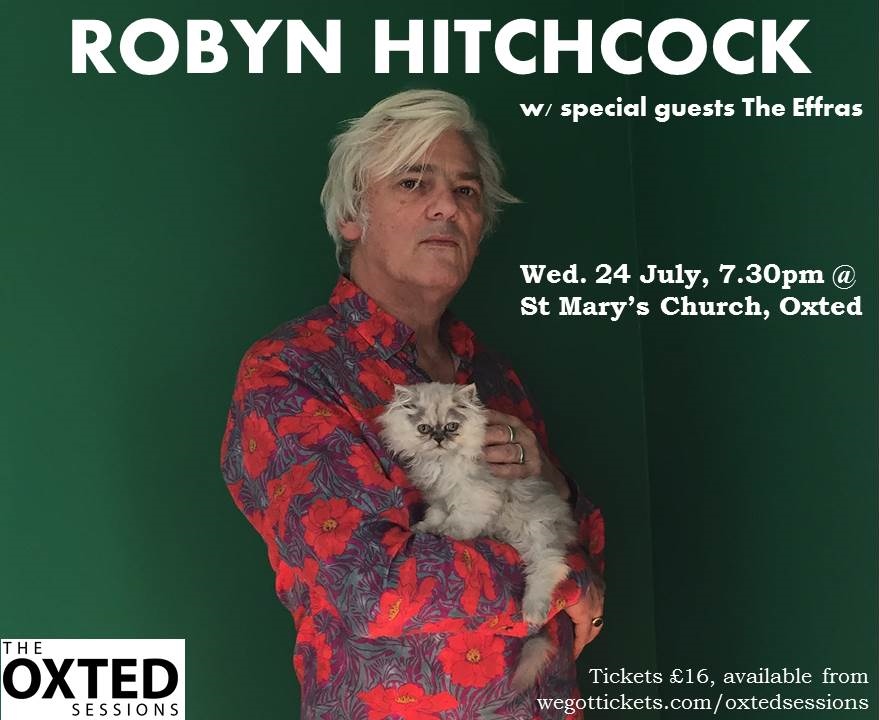 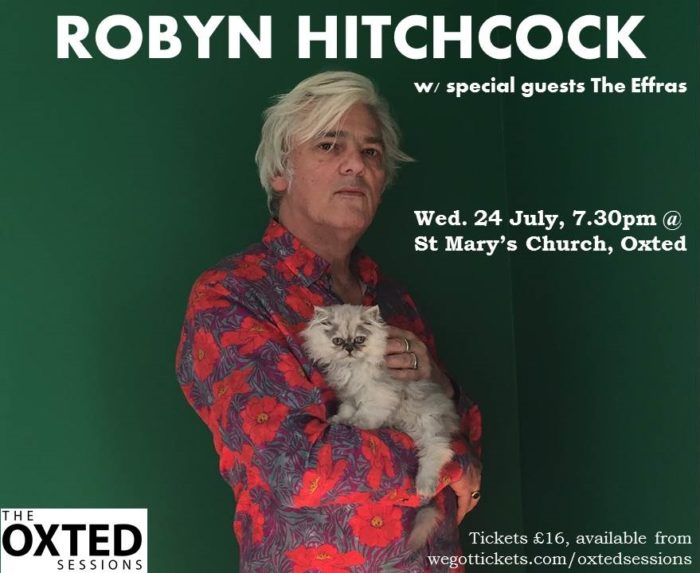 On Wednesday 24th July, the Oxted Sessions is delighted to welcome one of England’s most enduring contemporary singer/songwriters and live performers to St Mary’s Church.

Where to begin with Robyn Hitchcock? He is a surrealist poet, talented guitarist, cult artist and musician’s musician. Hitchcock is among alternative rock’s father figures and is the closest thing the genre has to a Bob Dylan (not coincidentally his biggest musical inspiration).

Since founding the art-rock band The Soft Boys in 1976, Robyn has recorded more than 20 albums, collaborating with the likes of Jon Paul Jones, Peter Buck, Nick Lowe and Johnny Marr during that time. He also starred in ‘Storefront Hitchcock’ (1997), an in-concert film recorded in New York and directed by Oscar winner (and huge fan of Robyn’s) Jonathan Demme.

Blending folk and psychedelia with a wry British nihilism, Robyn describes his songs as ‘paintings you can listen to’. His most recent album, self-titled, was released in April 2017 received rave reviews from UNCUT, Rolling Stone, Paste, Tidal and more.

Opening for Robyn, will be The Effras. With their own brand of literatre folk-pop, founded upon ‘classic English songwriting in the tradition of The Kinks and Squeeze’ (The Windmill, Brixton), this will be a return home for the band. Lead-singer and songwriter Andrew Rumsey lived and worked in Oxted until January of this year, and was indeed Rector of St Mary’s Church. Having supported the likes of Chris Difford, Martin Carthy and Kathryn Williams in the last year, the stage is set for a triumphant return to Oxted for The Effras.

Oxted is served by direct trains from London Bridge (30 mins), Victoria (40 mins) and East Croydon (15-20 mins). St Mary’s Church is a 5 minute walk from Oxted train station. The last train back to London leaves at 23.23.

Alternatively, a limited amount of free parking is available at the venue.

A cash bar will be in operation.