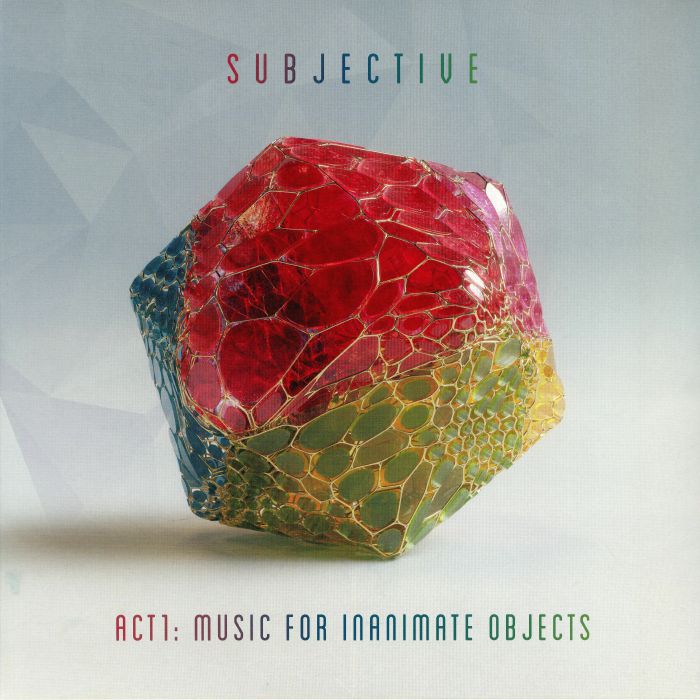 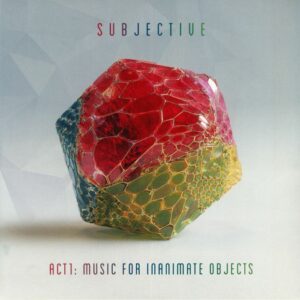 Act One: Music For Inanimate Objects is the debut album by Ulterior Motive’s James Davidson and Drum and Bass pioneer Goldie under the Subjective moniker. Simon Tucker reviews.

The roots of Subjective can be traced back to Goldie’s celebrated album The Journey Man  in which the drum and bass legend worked with James Davidson. The pair were obviously happy with the results as they have now produced a brand new project together under the Subjective moniker and this, their debut long player, takes selected narrative and textural strands from their previous work and have developed them further creating an album that is widescreen and serene.

The first thing you must be prepared for is the fact that Act One is not an album full of cuts designed to shake bass bins and get the teeth gritting. Goldie and Davidson have made plenty of those type of tracks over the years so why would you want that from this project? Instead, the duo have taken various elements from their oeuvre and create a new, spiritual album that celebrates the good in the world and forces the listener into a state of contemplation and hopefully leaves them with a more positive mindset. This is head music that keeps the beats in the mix but makes the main focus of the music the atmospherics and sound design. There is a shimmy sprinkled all over the production of the album that adds a tropical sunset sensation to Act One and it is this that makes the album not only a new style of sound of the duo but also serves as a reminder of why we loved this new genre of electronic rave culture in the first place.

You see, from the horns and strings that snake through opener Midnight Monsoon to the skittering percussion and vocals singing about “I just want to be free” on Rift Valley you realise that this album is a love letter. It is a love letter to the halcyon days of acid house, when the possibilities seemed endless and many of us thought we were creating a change. This is an important lesson Subjective are preaching here as, although there were many changes for the positive birthed from that explosion of beats, warehouses, fields and drugs, we now find ourselves in a place of spiritual malady where greed = good and this entire island of ours seems to have turned back the clock to the 1970’s. Ecstasy replaced by Ketamine or “spice”. Getting high to stay imprisoned instead of setting yourself free. Act One is a vital form of protest music. It isn’t here to shout at you and batter you over the head with sloganeering or lyrics that spout liberal ideals, instead it makes you do that most important of things….take a deep breathe, examine, reevaluate, admit your flaws and strive to do better. In fact, one of the most powerful moments on the entire album is on Silent Running where the beats are nowhere to be found and instead a piano loops a melancholic motif as strings and synths slowly swoop and dive around it. It is, quite frankly, gorgeous and should be celebrated as highly as any of the more classic and well known tracks that Goldie has been a part of.

The desire to look backwards does not make Act One a sheer exercise in nostalgia however, as by infusing the spiritual aspects of early rave culture with modern production techniques, Subjective have created a music that steps out of the “dance” music category and into what can only be described as modern soul. The fact that the album came out on classical imprint Masterworks should give you a clue as to what you are about to hear. Fear not though, as Davidson and Goldie have not forgotten that once you have centred yourself, we humans still feel at our most free when engaging in total abandon moving our body to a rhythmic pulse and that pulse is created by the deep sci-fi palette of Re-Entry. You can tell a lot of though has gone into the sequencing of this album as we have a run of tracks at the front of the running order that align us with the intent and overall aims of the album before Re-Entry does exactly what it says it will and brings us back to the awoken state all refreshed and reborn and ready to take the albums message forward. This is a sensation that continues with the urgent string-led Waypoint (another album highlight) and I Saw Her Last Summer which is where you are truly sent spinning backwards to a field surrounded by friends and with nothing but positive thoughts in your mind.

With this album Subjective have created a soul record in heart and intent. It is an album that resonates long after listening and which has the ability to alter the mood for the better. It is heartfelt hymn to the past and a sincere plea to the better nature of our human nature. Act One: Music For Inanimate Objects is a welcome balm for the soul and an incredibly powerful protest album in the way it is not here to take pot shots and get angry but instead forces the listener into a state of open serenity where peaceful thoughts and positive intentions can be birthed. A deep and rich album and one that I truly hope signposts just a first step for the duo as you get the sense that Davidson and Goldie have a lot more to say….and boy doesn’t the world need voices like this right now.