Home Music Music Interviews An interview with the 5.6.7.8’s 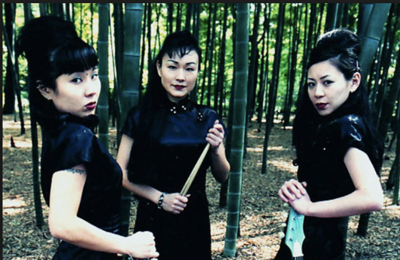 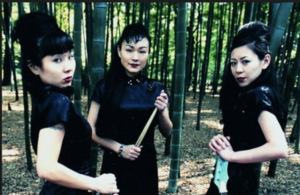 Having just released a 30th Anniversary edition of ‘Woo-Hoo’ and with a new career retrospective compilation being readied for release, we thought it time to catch up with The 5.6.7.8’s

Japanese three-piece The 5678’s came to international prominence via their cameo appearance in Tarantino’s ‘Kill Bill’, playing their cover of the 50’s semi-instrumental ‘Woo Hoo’. They seemed so perfectly idiosyncratic – indeed so Tarantino-esque – that you could be forgiven for thinking they were a band created for the film. Of course, the truth is that they were an established band well before QT came across them on a trip to Japan. I recently interviewed Yoshiko Fujiyama (Guitar/Vocals), Sachiko (Drums) and Chelio Panther Omo (Bass).

I started off by asking how long they’d been together. Yoshiko: “Sachiko and I have been together for about thirty years, Chellio Panther Omo joined us on bass about five years later – so quite a long time! We’d all played in other bands before The 5678s.” I wondered what they’d been listening to and what their reference points were on putting the band together. Yoshiko confirmed what most of us probably suspected, in that the classic girl bands like The Shangri-Las and The Ronettes definitely influenced the band, but their influences also ran to “New York Dolls, The Cramps, The Ramones, The Heartbreakers, The Clash and The Rezillos – all those punk bands who covered the 50’s and the 60’s music.”

I was interested to find out how a band like The 5678’s fared in the Japanese marketplace. Sachiko “It took us about five years to get our first single ‘Mondo Girls A-Go-Go’ released. We’d built up a good live following, so it did well for us”. Was it harder for an all-female band to break through in Japan playing your kind of music? Yoshiko: ”No matter where you are, it is still hard to keep doing a band for women, especially those who are married and raising children.” 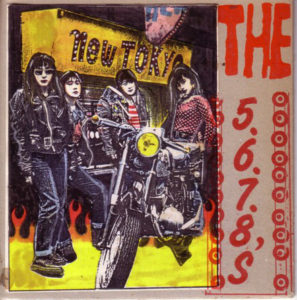 The big step up in profile for the rest of the world was obviously the Tarantino ‘Kill Bill’ connection – did it boost the band’s profile in Japan to the same degree it did for the rest of us? Sachiko’s response surprised me as she said it made very little difference to their visibility at home. Also surprisingly, ‘Woo Hoo’ wasn’t a regular feature in their set pre Tarantino! Yoshiko told me that the iconic Kill Bill club scene was actually filmed in a movie studio in Beijing in China and was modelled after ‘Yamashiro Hollywood’ – a Japanese restaurant in Los Angeles!

There must have been a lot of pressure that accompanied such a massive leap in profile once Kill Bill was released, given the global success of Woo Hoo. Yoshiko “It definitely got busier for touring abroad – we could hardly find enough time to record for years after the film. For me, I felt so much pressure during the film shooting, and it took a long time to realise how well known we suddenly became.”

They’ve never had any contact with Tarantino since their time on ‘Kill Bill’.

I wondered if the band were benefitting from their longevity in their home market. Yoshiko told me that there were no real changes in sales really and that although people knew the film that didn’t really translate into ‘fame’. When I asked where their biggest fan base outside of Japan was she said that they were far more well known in America than at home. That seems to be fine by Yoshiko though. ”Yes, I think it’s OK for me, as I don’t want my daily life interfered with by great popularity.” As for that ever-present problem confronting many bands these days with regard to combatting the loss of income via free downloading Yoshiko said that they don’t really make enough to live on from the band anyway.

Assuming that the success of’ Woo Hoo’ was presumably a career highlight, what else had been significant for the band? Yoshiko “Starting tours abroad was a big event for us. Ten years before ‘Kill Bill’, we had gotten to know members of garage bands from San Francisco and New York, and then we started to do some tours together. We were really influenced by American local bands – especially The White Stripes.”

The band have a reputation for their ability to add something unique to their cover versions – they do a fantastic version of The Ramones’ ‘Howling At The Moon’. Yoshiko told me that about half their set is comprised of band penned numbers. I was curious as to why they sometimes translated the lyrics of their covers to Japanese. Yoshiko cleared that one up – it was really a case of whether the song had already been remade and released in Japanese in the 50s or 60s.

Given their range of influences, what they were listening to these days? “Recently, we were invited to the birthday party for Jello Biafra in San Francisco and met The Darts there. They are so cool and reminded me of The Pandoras in the 80’s. Plus they were accompanied by their children and I can really relate to that. There are some great Japanese acts at the moment too – such as Fujio Yamaguchi and Geno London.” 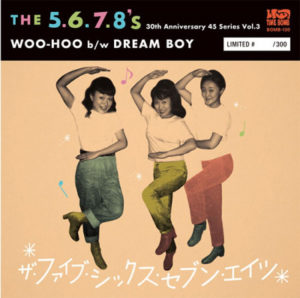 To wrap up, could they ever do a gig where they didn’t play Woo Hoo? Surprisingly and to their credit, they don’t always feel compelled to play it and they don’t feel that there’s any disappointment when they don’t. I wondered if maybe they’d come to hate the song but Omo denied that saying they’ve always thought it was a fun song to play.

The band are starting to tour a bit more extensively again and have recently played in the UK and USA. With a new career covering compilation out soon and the prospect of some new material not too far away hopefully we’ll be seeing a lot more of the band outside of ‘Kill Bill’ re-runs.

A 30th Anniversary edition of ‘Woo-Hoo’ was released by Time Bomb Records in December 2018; its a 7″ limited edition of just 300 and available direct from Time Bomb.