Home News WATCH THIS! the trailer for ‘Lords Of Chaos’ the film about the... 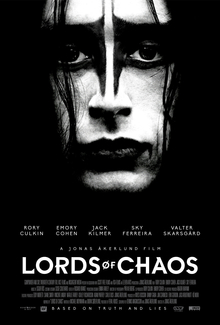 Watch the new trailer for upcoming Lords Of Chaos film based around the birth of black metal in Norway.

The black metal scene has been one of the most fascinating and cutting-edge music scenes in the world but its roots were intense, dark and bloody.

It shouldn’t really work but the film, starring Sky Ferreira and Rory Culkin the acclaimed true-story horror from Grammy-winning music video director Jonas Åkerlund is meant to be very good.

It tells the story of the band Mayhem – revered by as forefathers of Norwegian black metal and their bizarre story that included in 1991 then vocalist Per Yngve Ohlin (“Dead”) taking his own life, before guitarist and scene driver, a Øystein Aarseth (“Euronymous”) was murdered by former member Varg Vikernes (“Count Grishnackh”) of Burzum.