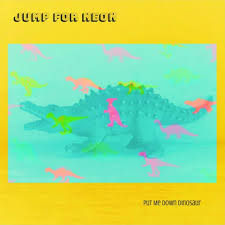 Jump For Neon: Put Me Down Dinosaur

The latest project by artist William Gray under the Jump For Neon moniker, Put Me Down Dinosaur sees him shift stylistically from his previous sound whilst mining his own personal battles for inspiration. Simon Tucker reviews.

Put Me Down Dinosaur is the second album by solo artist William Gray under the Jump For Neon moniker and whilst Gray has stated that some of these songs are older than on his previous eponymous debut album, it has taken him this length of time to fully flesh them out and to find the true centre of the songs. A stylistic shift from the previous, more heavier sound into a more acoustic based setting helped as did him receiving the diagnosis that he suffers from depression. This diagnosis helped Gray to understand a lot of why he had suffered various forms of mood swings and negative behavioral patterns. With this in mind, Gray went back to his older songs that he had written and came to a clearer understanding of what they were truly about and how exactly he should frame them.

It can be worrying when a press release announces a shift in style by an artist especially if you are fond of their previous work but with Put Me Down Dinosaur there really is no need to panic. The more acoustic tone and the using by Gray of a drum machine to flesh out the songs and add another textural element works wonderfully well helping not only the songs to reveal themselves but to aid the listener into settling into the correct mindset for the albums running time. It’s a blending that reminds of the folktronica movement which included the likes of Four Tet and Trwbador and there is more than a shade of Radiohead’s The King of Limbs album on some of the tracks which may serve as proof that that often maligned album is quietly becoming one of the bands more influential.

Gray’s decision to openly discuss his depression and present himself so exposed on Put Me Down Dinosaur is a brave move and it is one that he should be proud of as the songs are all the stronger for it. Tracks like Solace and Suzie are beautiful little vignettes that paint such vivid colours whilst others manage to take unexpected swerves which can catch you off guard like opener Somewhere Else which is foot-tapping one minute then has these sudden bursts of animated sci-fi sounds that seem to come out of nowhere. It’s moments like this and like the one on Baggage where Gray’s vocal goes full early Morrissey that show an artist not afraid to have fun and push himself even when dealing with such heavy material.

Put Me Down Dinosaur is a wonderfully timed album as it suits the fast oncoming rush of Winter. It is an album that is melancholic without being maudlin and one that never bogs itself down too long in the heavier side of things with Gray knowing just the right moment to inject a lightness or sense of humour into proceedings. It is also wonderful to hear someone who you can just tell has even more to give as their career develops and as he has decided to be bold enough to switch up his sound so dramatically for this album, Gray is an artist with a long and rich future ahead and this Jump For Neon project certainly has more tricks up its sleeves and more stories to tell.