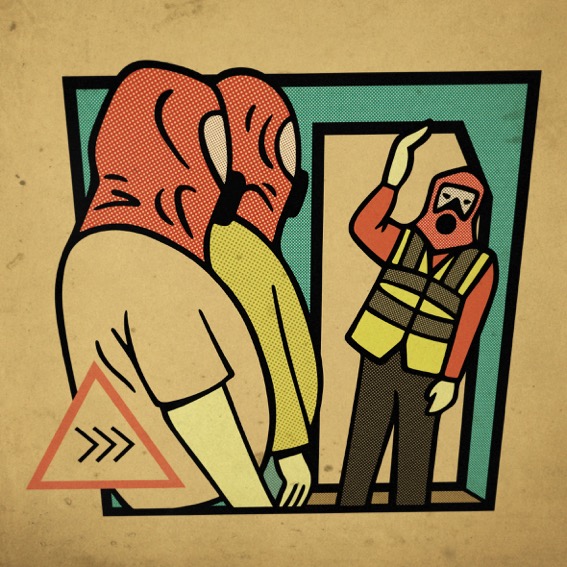 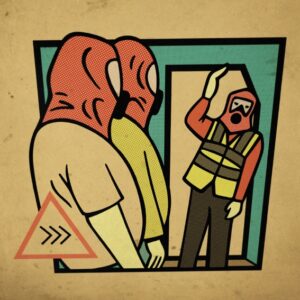 For their first long player since 2012’s >>, Beak> throw back the curtains and come out all guns blazing. Simon Tucker reviews.

The classic debut. The difficult second album. Album number three. The latter doesn’t sound as exciting as the first two but look through the history of recorded music and that third album is often where the real magic happens. Bands with longevity. Bands with rich and varied careers. It is normally on album number three where they start to blossom. OK Computer, The Man Who Sold The World, Tago Mago, Mezzanine. All albums where the artists start to truly throw off the shackles and stretch themselves. The excitement and rush of getting a debut album out has passed. The demand for a second album quickly has been resolved. Album number three is where so many artists place their flag in the mountain and exert their inner selves. We find ourselves at this point with Beak> who, even though they’ve not had the classic record label exec pressure to create something not true to themselves, have up to this point been making intriguing and exciting music albeit one that has sonically seemed deliberately murky and wilfully varied. All that changes right here right now with >>>. >>> is an album where the band (Billy Fuller, Geoff Barrow, Will Young) stride forward with confidence and an audible dose of warranted self belief. It is an album that within is dystopian and angry exterior displays a fragility and emotional core. This is modern music made for modern times. The sound of three men locked in with a singleness of purpose.

To understand >>> you must first go back to the bands 2015 ‘The Meader’ EP. It was on this four track EP where you sensed a shift in the bands desire. The experimentation was still there (brilliantly so on the closing track There’s No One featuring Jonwayne) and the motorik beats the band had become known for were also present and correct but there was a tangible sense of a band hitting their stride. The EP also featured their greatest moment to date in the song When We Fall (more of which later).

The twisted strut of >>> comes at you from the beginning with opener The Brazilian which oozes so much attitude it sounds like its smoking a cigar and kicking in doors. It is a hard-hitting groove where every snare snap and hit-hat shut-tight is recorded so sharply it has the potential to create whiplash in the listener. As Fuller’s bass line rotates around the night-time Bristol streets, synths are morphed and twisted creating a deep sense of unease and of woozy momentum. The band are that confident in what they are creating they even allow for a odd audio dip and return in the songs volume which tells us we are in the hands of craftsmen who fully have control over you for the duration. Can they be trusted not to pull the rug from under you? Can they fuck. Would you want them to be anyway? Not for a second. This is the Beak> we have loved for a while now and we are here for whatever they throw at us.

Brean Down you would have heard by now if you are a BBC 6Music listener. It’s the gnarly, snake charmer that’s been on their playlist. Loose in groove and stabbing in strings. Brean Down is a nasty little bugger. A song that is designed for movement and is the closest the band have come to date to creating a song that would smash any alternative clubs dancefloor. It’s the hit they have deserved.

Birthday Suit and Harvester are two sides of the same coin and represent the heart and soul of >>>. The former plays cyclical and plaintive, synth lines and melodies sometimes not in time or in sync but perfectly matched. There is a moment on Birthday Suit that perfectly represents the album as a whole. As we get to the centre of the album Geoff Barrow sings “free will / tonight / tonight”. The word “tonight” echoes off into eternity and is clearer than a lot of vocals on the rest of the album, and the music builds and builds as it loops with ever more intensity. Perfect human fragility married to technological dominance.  Harvester follows Birthday Suit thematically and is plaintive and lilting until a burst of mighty strings shake us out of our head-nod. Introverted and humane. Powerful and exposed.

Allé Sauvage was the first real glimpse of >>> that we were given and what a treat it was. The song is more akin to the sounds made on previous Beak> albums but again there was more grit in machinery. More grime in the mix. The bands fondness for the works of John Carpenter is present and correct but the trio again to create a work that is cyclical and dizzying. It paces itself to perfection until we reach a point where it is almost unbearable and it is only when the band feel they have driven the song enough do they allow it to break down and place us back on solid ground.

It is at this point where >>> starts leading us down the home straight. First we are turned around a dark corner and are marched down a rain-soaked desolate high street with the eerie Teisco, all backward slipping tape and grumbling bass, before the band slap us between the eyes with the boisterous cop movie funk of King of the Castle. King of the Castle is anger covered in swing and strut. It is also one of the most playful and smile inducing songs the band have ever written. An enemy coming at you with a smile.

RSI lifts the album into a sprint to the finish and is, like Allé Sauvage, the closest the band come to sounding like any of their previous albums. The difference here though is the larger feel to the production values (this is true of the whole album). The canvas feels bigger and brighter. RSI is destined to be a live Beak> classic with Barrow’s drumming crisp and driving. It is at this point you realise we are nearing the finish line now and a false sense of security falls on you because remember earlier when I said the band were unafraid on >>> to pull the rug out from under you? Well there they go with the razor-wire slash of Abbots Leigh. The love of bands like Earth and Sunn O))) is displayed here and the duality of >>>  returns as the mind-altering first section falls away into a heavy rhythm with flourishes of beauty sprinkled over the top.

Here it is then. The finale. The end to an album that is the first full length release by the band since 2012’s >>. So how do the band decide to close this latest chapter? They decide to bring When We Fall (told you we’d be returning to this later) back for a second round. When the tracklisting was announced it was a mixture of delight and puzzlement when this writer saw that When We Fall was sitting on here. The delight comes from the fact that When We Fall was the bands finest hour to date. One of the most beautiful and devastating protest songs in many many years. It is a song that, in its lyrics, was more a call to arms and inspiration to DO SOMETHING than any shouty punk cliché or  right-on fist waving anthem. It is a song that deserved a second wind and further exposure to more listeners. However, there was also a sense of questioning from an artistic point of view of why the band would do this. One listen later and the answers were clear. This is not just placing an old song onto the end of an album, more an extended version. This is When We Fall the Directors Cut and boy it’s thrilling. To describe the alterations would be akin to spoiling the ending of a movie. All that it is safe to say is anyone who claims you can’t improve on perfection is wrong as Beak> have done just that. When We Fall (>>> edition) maintains the grace and beauty of the original whist adding a larger emotional clout. As it reached its climax the tears ran down this writers face….what a feeling it was.

With >>> Beak> have made the album fans have known was coming yet managed to surprise us all. It is the album that should send them overground leading the charge. It is an album where the three players are playing for their lives. The instrumentation is louder, brasher and more clear cut. Vocals are more decipherable (for Beak> anyway) and the production enlarges every emotion. It is powerful and pristine. It is swampy and divine. The fog has lifted and what a vision we have been gifted.