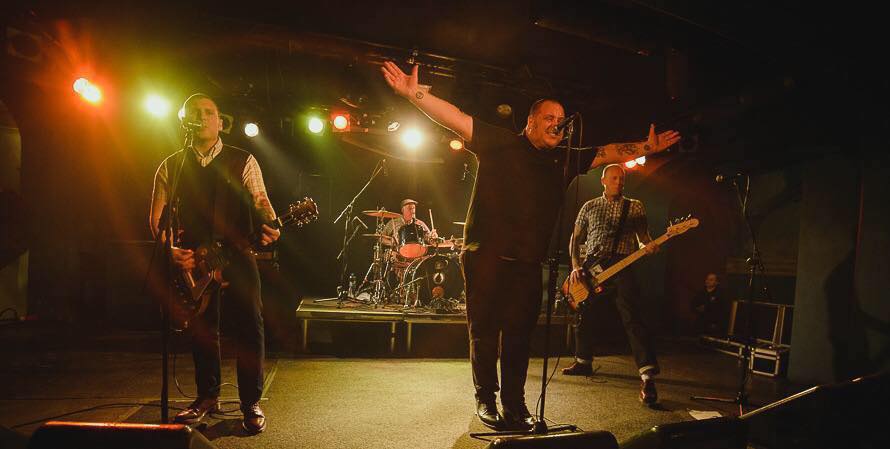 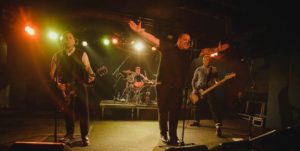 US boot boy rock‘n’roll specialists (plus one Canadian) Suede Razors – made their first ever live appearance in Manchester at the Star and Garter and played a killer set of non–stop bovverbeat anthems. The band had only had one rehearsal and one gig prior to tonight’s show in nearly a year, due to bass man Mike’s legal problems (see my LTW interview for info).

You would never guess though – they sound like they’ve been on the road for months. Tighter than the skin on Cher’s face and rocking harder than Slade on steroids, this was the highlight of my gig-going year so far.

Having played the records to near destruction over the years, it was great to see the band in the flesh and witness four guys operating at maximum rock’n’roll overload.

Darrel is the visual focal point but axeman Bryan, drummer Eric and Mike on bass are all equally vital cogs in the machine. The crowd was exuberant and enthusiastic and the band were suitably appreciative of the great response that they received. In a set without one duff filler, highlights for me were probably ‘Berlin or Bust’, ‘I’m a Bovver Boy’ and ‘Keep On Rockin’.

Anyone wanting to know what all the fuss is about have had life made a lot easier as Pirates Press have just released a compilation CD of everything they’ve recorded so far, newly remastered. Look out for ‘All the Hits…and Misses’. It’s a limited pressing though so don’t hang about!