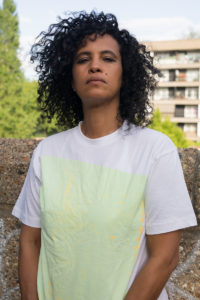 Twenty-four years after her worldwide hit Seven Seconds with Youssou N’Dour, Neneh Cherry returns with another protest song mixing a hard-hitting message with an irresistible tune.

Co-produced by Four Tet and Massive Attack’s 3D, it’s a slow-burning electro-dub skank with an infectious piano melody floating over the top before a killer bassline kicks in. But that’s just the medium for a topical message.

While 7 Seconds, which reached number 3 in many countries (including the UK) in 1994, was an emotional response to the innocence of a new-born child in a violent world, Kong once again fuses the personal and the political, in a timely protest at the ongoing European refugee crisis, filtered through the history of colonialism and western military power.

“Every nation seeks its friends in France & Italy / And all across the seven seas / And goddam guns and guts and bitter love still put a hole in me.”

This stunning video by fast-rising south London director Jenn Nkiru, who cut her teeth on Beyonce and Jay-Z’s internet-breaking Apeshit, and the single’s striking artwork – a portrait of Neneh in defiant pose – is by Turner Prize-winning photographer Wolfgang Tillmans.