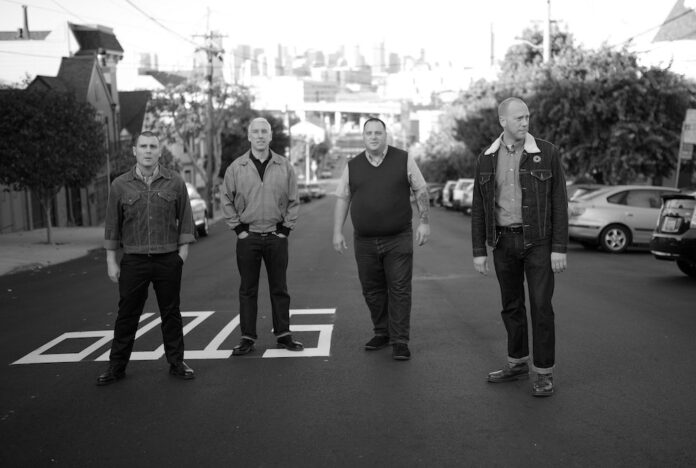 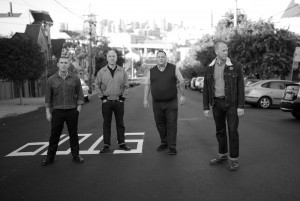 San Francisco based Suede Razors first featured in Louder Than War back in 2014, with European dates in August we thought it was about time we caught up with them; US correspondent Mark McStea was duly dispatched;

There’s been a slow and steady upswing in interest in, and in bands playing, what can best be described as ‘Bootboy Glam’. That term is, in itself, overly restrictive, as the spectrum of bands who are embracing key elements of the golden age of glam span a fairly broad range. There’s Giuda and Faz Waltz at the more Slade-alike end through to The Biters and Smash Fashion who sit somewhat in the middle, with hints of the Bowie and Bolan vibe. Then there’s BBQT and Glam Skanks, who sit firmly in the Suzi Quatro camp. Other acts of note would be Hammered Satin, Hard Wax and Star Studded Sham. It’s interesting that all but the last two hail from overseas, as the original age of glam was very much a UK based phenomenon.

To that list can be added Suede Razors, who are from San Francisco and sit firmly at the Slade influenced end of the movement. Anyone with a love of good- time rock’n’roll, with great riffs and an instantly memorable chorus, needs to check out the premier exponents of bovver rock’n’roll – Suede Razors!

I discussed the roots of the band, their influences and their plan to visit the UK in August with bass player Mike Josephson.

LTW: How did the band get together?

“Suede Razors formed in mid-2013 when me and Bryan were not as busy with our bands at that time – Sydney Ducks and Hounds and Harlots. We were looking to try to play something a little different. As a long-time friend and incredible drummer, Eric joined up and being the spectacular front-man that he is, Darrel from Harrington Saints completed the line-up. The initial thought was just to get together with no real plans or goals, and to just have fun playing music that was a slight departure from what we were all doing in our current bands. Of course, with that much creativity and experience in the room, it didn’t take long before we hit the studio. So yeah, we started in 2013, but there has been an unfortunate hiatus for the past 6 months.”

LTW: Who are the main influences on the Suede Razors sound?

“Well, at least as far as I’m concerned I’d say Slade, Sweet, The Faces, Thin Lizzy, Rose Tattoo, Coloured Balls and AC/DC. There’s a whole lot of great stuff in that ‘junkshop’ genre as well, like Iron Virgin, Hector and Bilbo Baggins. I grew up in Canada, so our pop culture was far more in line with the UK than the USA. Bryan, for example, is much younger. Whilst the big names like Sweet, T Rex and Gary Glitter were accessible enough in America, it was from compilation albums like ‘Glam Crazee’ where he came across Slade and Mud.”

LTW: Is there a big ‘fan culture’ in the States for the bootboy look? Is it seen as threatening by the average man on the street?

“I think that the overall ‘bootboy’ image at this point has been co-opted so much by high fashion, that to see someone in Docs or a Fred Perry shirt etc is not perceived as ‘threatening’. Dare I say it, but it’s almost becoming an off-shoot of ‘hipsterdom’ these days! Even the way that tattoos have become so acceptable in mainstream culture means that when someone’s seeing a heavily tattooed guy with a shaved head, they’re probably not even gonna register it now! Well, definitely not in urban areas – maybe in smaller towns it might have a different effect!”

LTW: What are the other guys currently doing in relation to the other bands that they are/were in?

“Darrel is in Harrington Saints. Currently, Bryan and Eric are now doing Ultra Sect as a side project – check out their first EP which is great! I’m living in Canada at the moment and I’ve been playing with No Heart”.

LTW: It’s been a bit of a turbulent time for the band with your immigration problems. What was the story there?

“Basically, after living and working in the USA for nearly 15 years as a Canadian and having a legitimate work visa, I was held for eight hours in October upon returning to the States, and after lengthy questioning they came to the conclusion that I had been illegally ‘performing’ without a proper permit because I‘d been gigging and recording. The upshot is that I was technically deported and banned from entering the USA for 5 years. Obviously, this seemed like a really over-the-top decision based on the current political climate in the United States with respect to immigration and border security.”

LTW: Are you basically living in Canada moving forwards?

“I’m working with a lawyer to try to request that the ban be waived so that I can, at the very least, enter the USA, but this will take the best part of two years – and a lot of money.”

LTW: How does that affect Suede Razors?

“Well we’ve been forced to put a bit of a hold on things. I can’t gig with the guys in the States, but I can do anything outside of America. If the band pick up gigs where I’m not able to play, we’ve got a great guy who can deputise for me. With recording, it’s not much of an issue, you don’t all need to be in the same studio at the same time anyway anymore.” 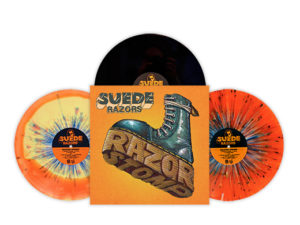 LTW: You are well known for the great graphics on your singles sleeves and the variety of coloured vinyl’s etc – is this part of a master plan to undermine the illegal downloading world in that the items become mega collectable as physical objects?

“Thanks! We owe all the great artwork and imagery to Muna, who is well known and admired within the scene for all his incredible work. As for it being intentional in any way, not really from the start, but once the first couple of 7”s were out and there was a definite ‘look’ to our releases, we definitely wanted to keep using Muna and we consider him to be the ‘fifth Razor’! We never really thought about trying to prevent any piracy, but of course if the artwork helps to motivate people to buy the physical release, that is a great result!”

LTW: Razor Stomp was your best work yet – when can we expect more new music?

“Unfortunately, again due to the situation, we have not really been able to do much writing. It is in the works and there are some songs that Bryan and the guys have been working on, which I will have to just learn on my own and record up here. As for a release date, watch this space!”

LTW: How has the Razor Stomp mini album done for you?

“Sales for the ‘Razor Stomp’ 12” which was released a little over a year ago have been great! I’m guessing it’s probably sold out most of its pressing.”

LTW: Can a band at your level make enough to survive just from playing in Suede Razors?

“We’ve all got families and bills to pay – you know, the regular everyday stuff. It’s not realistic to think that many bands at our level can make a great living unless they’re constantly on the road, and I honestly doubt there would be 250-300 places in the world that would wanna book us! Certainly, the money from selling albums helps, but like so many bands these days we all have to have jobs or play in other bands as well – whatever it takes to get by! Our sales from recording and merch basically cover our costs, so whilst we’re not out of pocket, we’re also not able to make playing in the band our day job.” 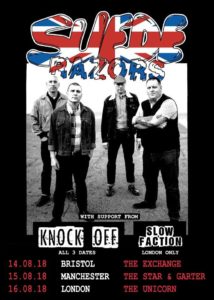 LTW: Great news coming up though with the announcement of dates in Europe…

“Yes! We’re in Spain for the Beach Beer Chaos festival and we wanted to play a few more shows. We discussed a lot of options, and with relatively limited time to be away and other commitments, we were only able to do a maximum of about 4-5 shows. We’ve all never really toured the UK, so we focused on that. Thanks to Knock Off we’ve got three shows with them in Bristol, Manchester and London the week before we go to Spain. So, if anyone is around in those cities and has the energy for a show post-Rebellion, please come out to see us!”