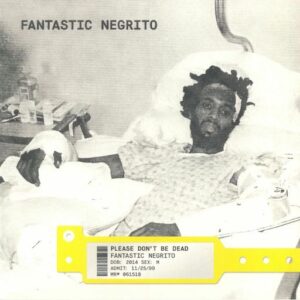 It’s setting the bar high, not to mention riding for a fall, when you call yourself Fantastic Negrito. But if anyone can get away with it, it’s Xavier Amin Dphrepaulezz. Not just because his real name doesn’t exactly roll off the tongue but because at his best he really is fantastic.

Negrito (as I shall call him henceforth to save my typing fingers from further punishment) has updated the blues and restored its currency as a vehicle for protest. Filled with anxiety about a range of contemporary social ills, of which there are more than enough in 2018, he says he made Please Don’t Be Dead principally because he fears for the lives of his son and is uncertain about what kind of future black children face in Trump’s America.

“Will someone shoot up their school? Will they become addicted to prescription pills? Will they wind up on the street, sleeping under freeways and overpasses? Will the police murder my son?” he asks. “I came up with the name Please Don’t Be Dead because I felt like we’d lost our way as a society and I know what happens when you chase the wrong things. It’s the story of my life.” It is indeed.

One of 15 children born into a strict Muslim household, his Somali-American family moved from the East Coast to northern California when he was 12. He began showing musical talent in Oakland, just as San Francisco’s once-radical influences of the hippies and black power were being erased by the new threats of gentrification and global capitalism.

Signed to a million-dollar deal in the mid-1990s by Interscope, who mistakenly saw him as a “new Prince”, his budding pop career (under the name Xavier) never took off as planned. His expensive debut album flopped, his career was stalled by record label squabbles and it was brought to a standstill by a serious car accident that left him in a coma for a month and damaged both of his hands – an incident referenced in both the title of his new album and the cover photo of him in a hospital bed (and inside shots of the written-off vehicle).

Negrito returned to Oakland and invested his not inconsiderable wealth into a profitable marijuana farm before returning to music after a two-decade hiatus and the birth of his son three years ago. His re-entry, with a new sound that updated the blues, came with a TinyDesk concert that won the YouTube channel’s 2015 contest for newcomers and has now been viewed 1.5 million times. It was followed a year later by the comeback album The Last Days Of Oakland which, remarkably (and deservedly) won the debutant with the funny name a Grammy for Best Contemporary Blues Album in 2017. Please Don’t Be Dead continues where it left off, blending blues with rock, funk and elements of hip-hop.

It kicks off in uncompromising style, with the Zeppelinesque riffing of Plastic Hamburgers and its rallying cry to “tear down the walls that separate us and face who we really are.” The pattern is clear: juddering riffs and funky rhythms, vocals veering between a bluesy growl (Transgender Biscuits), emotional soul singing (Dark Windows) and a sensitive falsetto (Dark Windows), married to lyrics addressing topical concerns – race, poverty, violence, inequality – and squealy virtuoso blues guitar that would not be out of place on a Black Keys or White Stripes record.

It’s all delivered with passion, infused with humour and imbued with the confidence and belief that can only come from being a survivor. As he sings on the final Bullshit Anthem, a funky jam whose singalong chorus pays tribute to Parliament and Funkadelic: “Take that bullshit / And turn it into good shit.” It’s not just good shit: it’s fantastic.