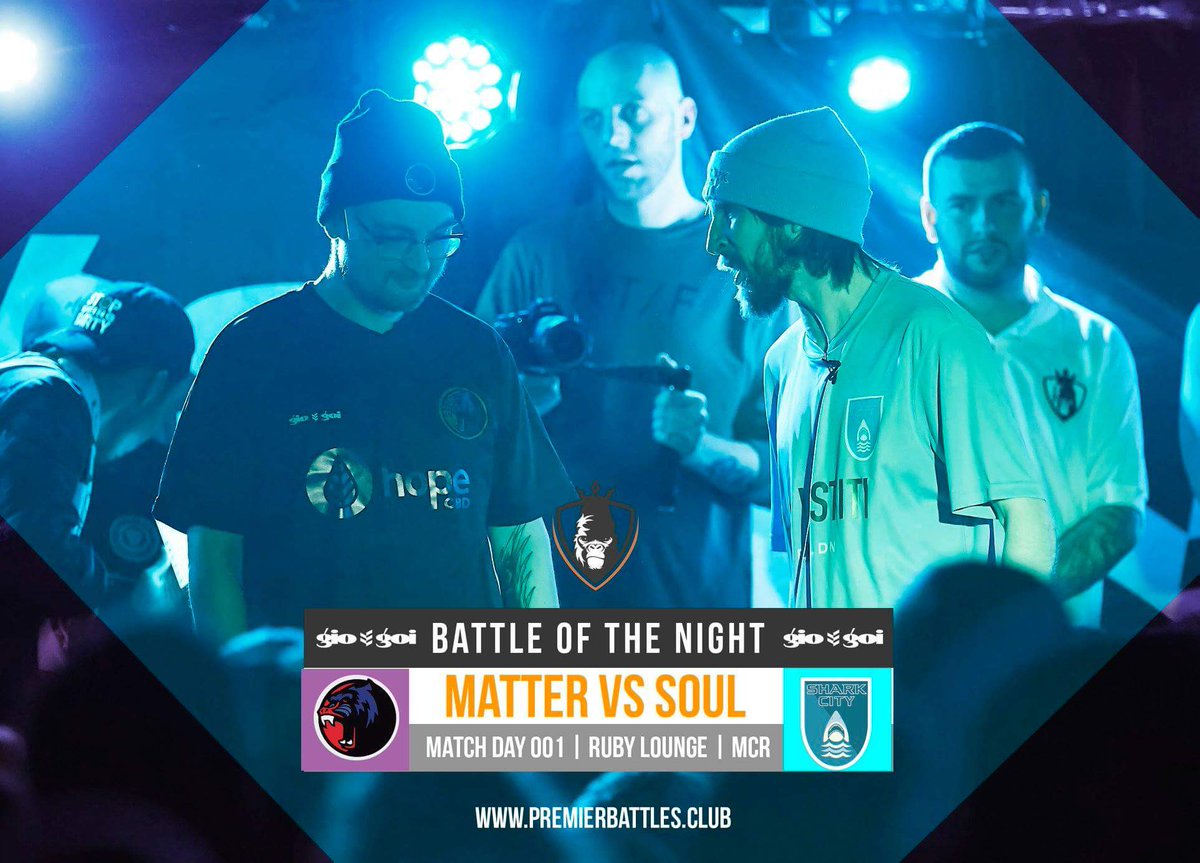 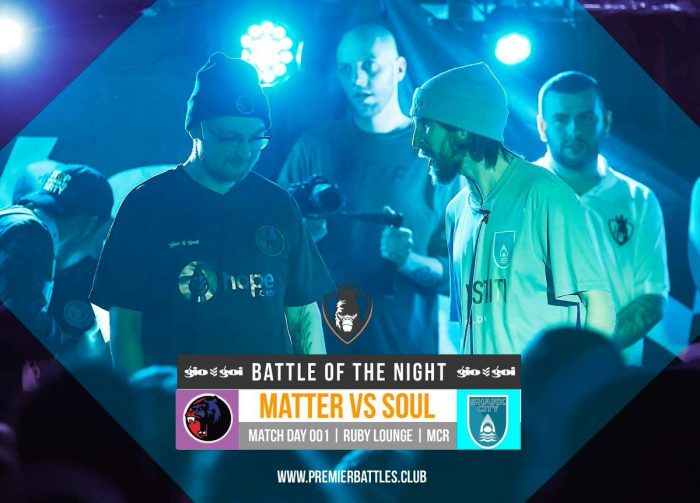 all photo’s by Jordan Magill

Bringing together Manchester’s love of hip-hop, football and fashion saw one of the best UK battle rap events of the year so far ‘Match of The Day’ go down at The Ruby Lounge to a sell out crowd – put on by Premier League battles and whats more hosted by one of the biggest battle rappers on the planet today. Manchester’s own Shotty Horroh alongside another leading name in the UK battle rap scene Bison Briggz, who with Shotty is co-owner of ‘Premier Battles’. Here Bison looks back on the event with LTW.com.

Making up 4 teams of battle rappers, all under the guise of their favourite football teams with the team shirts designed and made by another Manchester legendary name in the world of street fashion – Gio Goi. ‘Match of the Day’ was the first in a series of such events which we’ll see more of in 2018. And included some of the UK’s biggest names on the battle rap scene, like Liverpool’s O’Shea and the capitals ‘Villun’.. it was nothing short of a total bar fest. 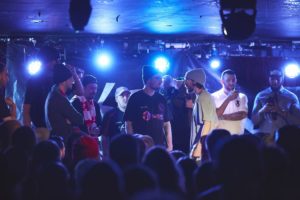 ‘Match of the Day’ event at The Ruby Lounge/MCR

‘Match of the Day’..what a great day of battle rap match up’s, but who put the work in on the day battle wise, and which team would you say came out on top and won the event?

Bison Briggz – For me personally, I feel Oshea gave the best performance of the day. Osh is a UK Legend and International star in battle rap (below) and he’s been a name everybody knows for the best part of a decade and he shown why on Match Day 001. He went against one the biggest names in the UK with Manchester’s Raptor Warhurst and still managed to put on a show and come away with the performance of the night bonus.

Team-wise, Shark City had a great day with Soul and Chris Leese both taking wins but for me, Knight’s shocked everybody by beating a team i manage Pride Battle Club which was a set back for us but one we’ve learnt from. 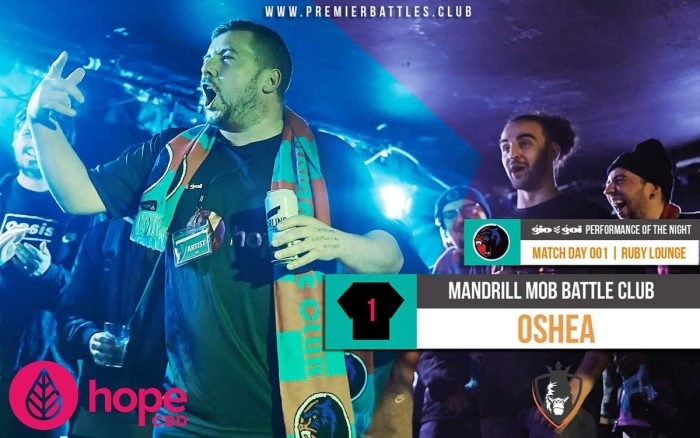 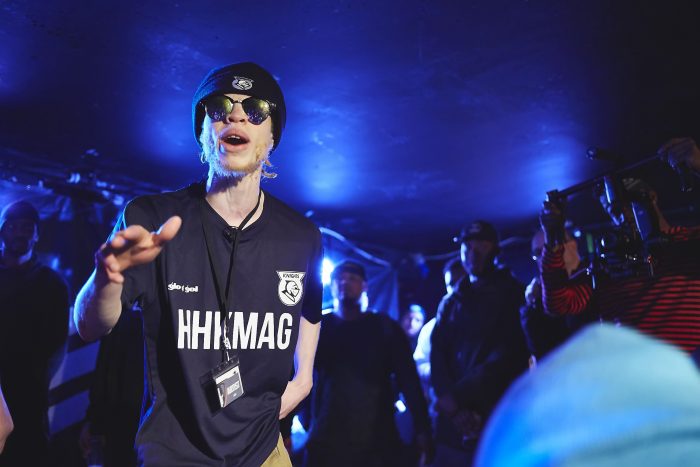 As well as hosting the event you managed one of the teams too?

BB – Yeah… I hosted the event and also managed Pride Battle Club. We started off really well, Juan picked up a comfortable win against Olde English but sadly we took 2 loses on the bounce and came away 2-1 down as a result.

..and what a great idea putting the battlers into teams, all based on their own fave footie teams. With the team tops designed and created by Gio Goi, can you tell me how the teams and tops were designed

BB – The jersey’s we’re something myself and Shotty spent hours designing while we were setting up the league. Luckily for us, Shotty has a great relationship with Ant and Chris Donnelly over at Gio Goi and ran the idea by them. And we’re very grateful they believed in our vision and wanted to work with us. 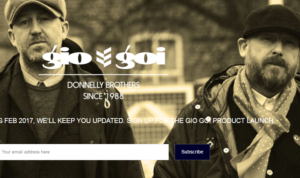 Gio Goi sent over some samples of what could be produced, we picked the colours and Chris and Ant handled the rest for us and mate, the final product is amazing! To be honest. When we had this idea for the league.. if you would have told me a kid from Salford and a kid from Harpurhay trying to absolutely wing this idea of an event, we’d end up with Gio Goi on board – I’d of asked a bit of whatever your on cos it must be good haha.

I understand your friend and colleague Shotty Horroh has just signed a 4 album deal with Sony..great news hey..what does it mean for UK battle rap scene and for the rest of the battle rappers like yourself do you think?

BB – Been a long time coming! I’ve run with Shotty for around 12/13 years now so to see where he’s come from and got to is amazing in itself. It’s great for UK Battle Rap as it now shows other battlers who make music, that you don’t have to be manufactured to be a success. You can be a skinny, rapper with a limited amount of hair growth from Manchester and still make it! 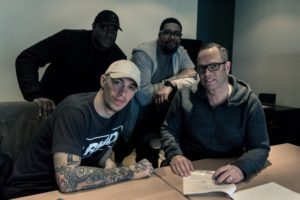 I’m absolutely buzzin’ with the Sony deal, Can’t tell you the shit I’ve seen him go through over the years and for this to be the outcome, just makes it all worth it! 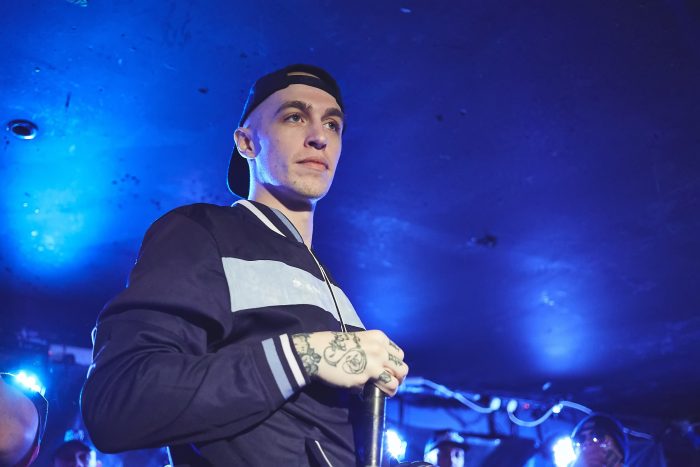 Shotty hosting ‘Match of the Day’ in Gio Goi

Whats next for ‘Premier Battles’, what future events have they got lined up for this year, and will we see you back in Manchester?

BB – Yeah, we’re keeping the engine running. Next event is ‘Away Days’ and we’re taking it down to London for April 14th! then we’re back in Manchester for June at the Ruby Lounge again.

We’ve already planned up to the end of 2019 so expect to see the brand grow and become unstoppable! Just got to see how much we can wing it and have fun before we need to be serious haha.

Also whats your own plans for this year..any releases or events you’re putting on yourself?

BB – I’ve taken a bit of a backseat with my own music over the last year and focused more on the business/management side of things and now with Premier Battles as another brand on the tree I’m just looking at ways to make a living doing what I love. 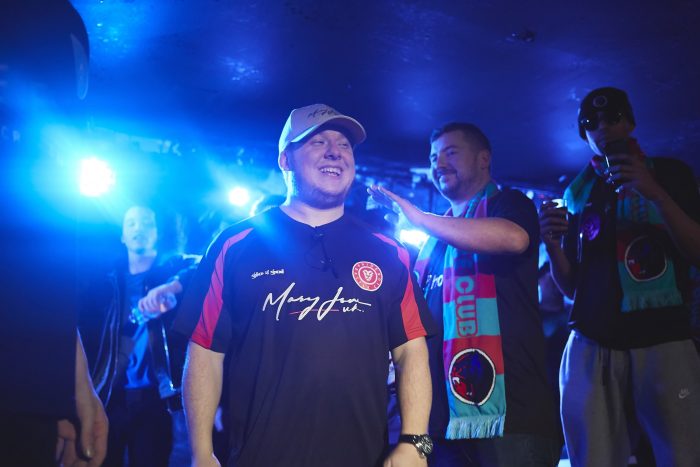 above – Bison Briggz hosting ‘Match of the Day’

I’ve still got the album I finished last year “New Wave Oasis” sat on my laptop, if I get a spare few months to breath I may package it up and do a little campaign and put it out there, but music wise it’s just a hobby now, I’ve had my fun with it haha.

Just make sure you check our premierbattles.club and all our events for the year will be dropping! all photo’s by Jordan Magill – https://twitter.com/Magillphoto

go to the Gio Goi website for all new collections – https://www.gio-goi.com/