Home Blogs 25 years since the fall of the Berlin Wall : John Robb... 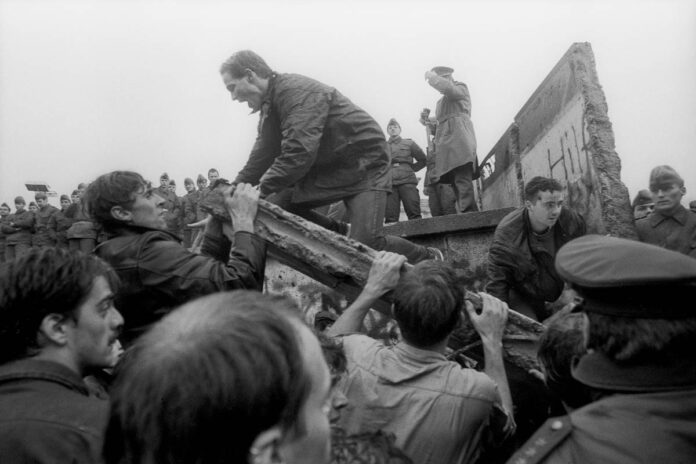 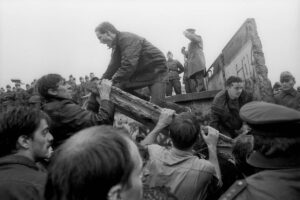 1989 OK! Wall across the DDR!” As Iggy never sang. But he should have. Because there I was in 1989 wandering around in the middle of history. The (Communist) party was over and the grim faced bastards that had run East Germany into the ground were donning their shabby suits, packing their official suitcases and leaving the city in their demented droves. The game was up, but East Germany still hadn’t been declared over. There was no one left to bring the flag down.

Sounded good! I got an overnight train to Berlin to inhale the scent of freedom and join the party as Berliners whooped it up on the hated wall. Problem was I fell asleep on the train and woke up in East Berlin. I dashed out of the station into bandit country. The last time I was in the West of the grand old city, just three years earlier, this would have meant instant arrest for wandering around without a visa, followed by some uncomfortable hours in a damp East German prison.

In fact I had never managed to reach East Berlin before. I tried to get in via Checkpoint Charlie during a 1988 Membranes tour, but had been knocked back due to the nature of my punk rock attire. The rest of the band got through and trooped around on a freezing cold afternoon with twenty quid’s worth of East German currency that they were forced to buy and could not take back to the West. Theoretically the aluminium coins had to be spent in the East, but apart from one stale loaf and some rancid old vodka they found nothing to spend the money on, and gave it all as a huge tip to a taxi driver who burst into tears at their lavish gesture.

West Berlin in those days was a powder keg of fierce entertainment. Squats packed with every dropout in the country showing off in a 24-hour Technicolor party right by the wall. With no national service in West Berlin and a few other legal loopholes, the city that wasn’t officially part of Germany made for a great bolthole for every small-town freak.

Yet everywhere you walked you would bump into the brutal concrete of the Berlin Wall. It was a brooding snake covered in great graffiti and a stark reminder of just how stupid and stubborn politics can be. The very claustrophobia of living in a man-made island also amped up the good times in the West as people partied into the apocalypse. There were always parties overlooking the wall. The sound systems were cranked up and windows thrown open just so the East German robot guards could see and hear the good times twenty yards away from their concrete observation towers.

Deep in the night you could go up specially built wooden steps and peer over the wall at the empty sanded runways and barbed wire, then into the big housing blocks on the other side and freak out at just how impossibly different those lives were just 100 yards away. Kreuzberg was the cool part of town. A general air of lawlessness reigned in the bacchanalian strip of bars, squats and punk rock graffiti. Good minds came alive and the mad got to breathe as the squatters mixed it with the Turks in a multi-racial, counter-cultural zone of action.

A couple of years later and there I was stumbling towards the wall from the wrong side. All I could hear as I got nearer was the shrill tapping of a thousand hammers chipping away at the reinforced concrete.

On top of the wall were confused looking guards with their guns pointed at the West and no orders of what to do. The wall was totally different from the East side. No graffiti. Just blank concrete. I walked up to the wall pulled down my fly and unleashed my cock and pissed all over the concrete blocks. It was a small gesture, but it had to be done!

I rounded the corner and waltzed through Checkpoint Charlie the wrong way round. The guards were stood around and not checking anyone’s papers. No one knew whether East Germany actually existed anymore, but at the same time they hadn’t been told to go home. Once through Checkpoint Charlie and back in the West I borrowed a pickaxe and chopped out some big chunks of the wall and put them in my pocket. Looking through the holes in the wall you could see the guards looking confused. “Go home!” shouted the merry throng before some of the guards put their hands through the wall and shook hands or sold their furry hats and Communist stars. You could see their confused faces and smell their fear. If this was the taste of freedom I was after, it tasted good.

Nearly twenty years later Berlin has turned into a normal city. The wall is long gone apart from one chunk just by the River Spree. The city is booming. Cranes now dominate the skyline and big glass buildings sprout up everywhere. The wall may be gone but Kreuzberg is still cool. The European epicentre of punk rock and alternative culture, cheap accommodation and a tradition of living beyond the law have left the former squat zone with a reputation. It’s still a big Turkish area and there are loads of great drinking dives are dotted around the area, along with a punk rock hotel with a 24 hour bar.

In Berlin there is an atmosphere of creativity and excitement as the city pushes towards the future. The punk rock backbone and powerful techno scene make it easily the most important counter cultural zone in Europe.

The winter chill might bite your bones but Berlin is a city that knows how to have a good time, the decadence of Weimar has somehow survived the Nazi clowns and the post war occupation, and is flourishing again in the twinkling neon of the new millennium. With a city centre flat costing about 40 grand, every freak with a few quid zipped into their back pocket is heading out there to set up camp and join the party. And who can blame them?

Berlin is also a city where history is right now. Instead of a clutch of ruined castle walls from the 12th century there are huge scars left over from the Second World War. The wall maybe gone but you can easily trace its former path through the city. The Checkpoint Charlie museum is still there and well worth a visit just to get a whiff of that post war paranoia and strangeness. The Reichstag is now reopened with its great Norman Foster designed roof and you can still see the bullet holes in the walls from the scars of street warfare in 1945.

One haunting spot with a real hum of evil is a scruffy piece of fenced off land between some huge skyscrapers and glitzy banks. This is the site of Hitler’s bunker where the half-crazed Fuehrer spent his last sorry and pathetic hours. No-one wants to build on the land and it stands there anonymous and out of the clutches of neo Nazis hoping to create a shrine to the strangely moustachioed lunatic.

In Berlin the past is never far away. To give the Germans credit they don’t back away from it, but the future is in your face as the German capital city reinvents itself for a far more productive century than the last one. Berlin in 2008 is fast-forwarding to the future and has a dynamism to match.

When you walk these streets you are walking around a city whose time has finally come.