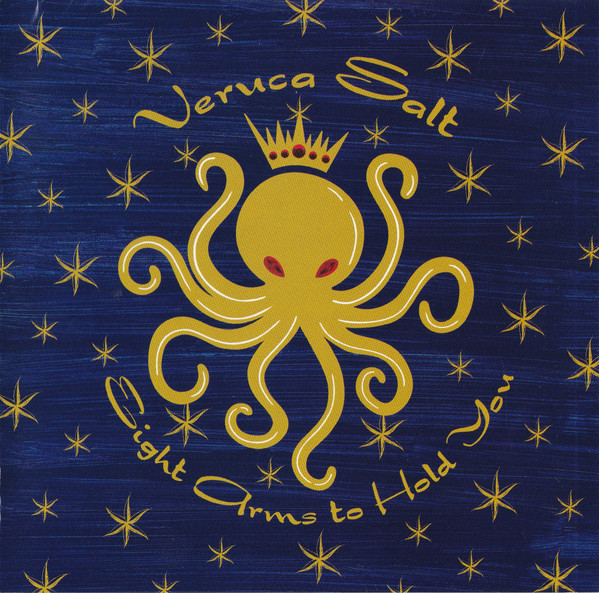 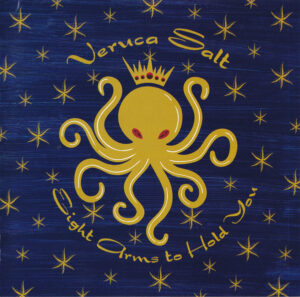 Veruca Salt’s electrifying album Eight Arms to Hold You is 25 years old. It’s time to give it the celebration it deserves.

Twenty-five years ago in February 1997, Veruca Salt’s second album Eight Arms to Hold You was released to eager fans like me who’d loved American Thighs and screamed along to Seether. I haven’t stopped listening to the record since buying it on CD back then, and I’m here to tell you it’s among the most underrated albums of the ’90s. How is it that everyone’s not still talking about this record twenty-five years later? In a recent interview with the band’s frontwomen Nina Gordon and Louise Post, Henry Rollins opined, “I would be loathed to relegate Veruca Salt to the pejorative term of being a ‘90s band.” Eight Arms to Hold You transcends the decade in which it was recorded with a kind of glam metal pop that blows away all the competitors.

Veruca Salt recorded the record in a rental house in Maui during the summer of 1996. While they’d worked previously with Brad Wood and Steve Albini, Bob Rock came on to produce Eight Arms to Hold You. (You might know Bob Rock for his work with bands like Metallica, Def Leppard, and the Cult, but before turning to sound engineering and production, he co-founded the band Payolas, whose song Eyes of a Stranger features in Martha Coolidge’s 1983 film Valley Girl.) Speaking to The Canadian Press at the time of the album’s release, Nina Gordon remarked, “Bob Rock seemed like a natural progression to us… We wanted to be sonically massive.”

Sonically massive, indeed. The album comes in at just over fifty-one minutes of thunderous guitar riffs and ferocious vocals. Gordon’s and Post’s voices explode with anger and loss, but also with power and pleasure. Like me, maybe you’ve wanted (and tried) to sing along with tracks like Volcano Girls, Shutterbug, Don’t Make Me Prove It, and One Last Time, only to recognise it’s impossible to come anywhere close to hitting those notes with the same intensity. Veruca Salt was and is formidable.

On Eight Arms to Hold You, Gordon and Post draw on musical references of the past while eclipsing some of the genres that reverberate on the album. Tracks I’d describe on one hand as metal ballads are also vicious love songs on the other, marked by cunning lyrics and the emergence of brutal characters.

For example, consider the lyrics from One Last Time: “I sold your love/ Down the river for a bow and arrow/ Euphoria has just been here/ and she’s looking terrible/ I never sunk this low/ It’s better if you go/ When you’re nearby/ I sit here and want you to try/ To love me like a monster/ One last time…” And from Loneliness is Worse: “December’s all alone and he’s calling me on the phone/ But he sounds so cold/ He says he loves me so/ But how would I ever know?/ Certain words grow old/ It’s a vicious kind of catch/ It sides me blind/ Now I’m out of my mind/ I want to scream…”

Nancy Bardawil directed dramatic music videos for Volcano Girls and Shutterbug, two of the album’s glorious singles. Look, if you’re not someone who listens to these songs and immediately wants more, you’ve lost me. Baradawil turns Gordon and Post into larger-than-life rock gods with a superhuman stage presence in her Volcano Girls video, thanks to bungee cords and safety corsets.

Bardawil later transfigures the frontwomen into preternatural leviathans in her Shutterbug film, pushing back against tropes of objectified female bodies. Gordon and Post appear in white bras and Yohji Yamamoto-like hoop skirts gone mad, monstrously and defiantly bending toward the camera as if to say, fuck off, but make it fashion.

Coming back to the reflexivity of their music, Gordon and Post engage in so much delightful play with the past. Eight Arms to Hold You is fiery and rebellious, but it also revels in its own fun. On MTV’s 120 Minutes in March 1997, Matt Pinfield asked Gordon and Post about the band’s lyrical reference in Volcano Girls back to their single Seether (“I told you about the seether before/ You know the one that’s neither or nor/ Well here’s another clue if you please/ The seether’s Louise”). He suggested they give a “clue” like the Beatles did in Glass Onion (those lyrics, if you can’t recall, are “I told you about the walrus and me, man/ You know that we’re as close as can be, man/ Well here’s another clue for you all/ The walrus was Paul”). Gordon replied, “Reprises, and referring to yourself… We’re all music geeks, and we love wearing our influences on our sleeves.” Post laughed, “we were basically breastfed the Beatles from birth” and agreed with Gordon, “we like tipping our hats to the people who have shaped our musical lives.”

Though its title Eight Arms to Hold You pays additional homage to the Beatles, earlier incarnations would have resurrected the Kinks. Indeed, the band considered naming the album Veruca Salt is the Royal Canadian Occult Society. Other musical reference points abound across the record, too. Sonically, Sound of the Bell has always struck me as an ode to The Cure, and there’s an obvious paean to David Bowie. The tributes might seem trite, but they’re in fact witty ways of instilling a timelessness to rock’n’roll.

Following the album’s release in midwinter 1997, it should have been met with sweeping praise for its enduring metal ballads and power-pop anthems. Yet sexist overtones made their way into reviews, and certain cringe-worthy pieces should leave magazines like Rolling Stone feeling ashamed. But let’s centre the ones still worth reading. In the band’s hometown, Greg Kot’s piece in the Chicago Tribune described Eight Arms to Hold You as “confident, strident… top-down, blast-the-stereo highway rock in the Midwest tradition of Cheap Trick, Material Issue, and ‘Saturation’-era Urge Overkill.” NME celebrated it as “the best love album… ever,” and SPIN writer Sarah Vowell urged us all to listen.

Outpost Recordings and Minty Fresh released Eight Arms to Hold You on February 11, 1997, on CD, with a small number of Outpost cassettes and Minty Fresh LPs. Geffen Records and Universal Music Group reissued a vinyl LP in 2018.

When Henry Rollins recently spoke with Gordon and Post, he inquired about their autonomy as musicians. The frontwomen joked they’d make a record filled with “epic fuckers” if left entirely to their own devices, a term they use to describe “long, brooding, bubbling, simmering, anthemic kind of songs.” Twenty-five years after the release of their second album, it’s clear to me there’s more than one way to describe an epic. Eight Arms to Hold You is fucking heroic – a massive, sonic achievement.